Jonathan Wilson On Slovakia v Ireland: 'Judge A Revolution Not At Its Beginning But At Its End'

Ahead of last night's Slovakia-Ireland tie,  we asked esteemed football writer Jonathan Wilson to watch the match and give us his assessment of the tactical evolution of Ireland under Stephen Kenny. Here are his thoughts on a dispiriting, if promising, result.

On the one hand, it was all very familiar. There was Ireland chugging away and failing to score. There were the missed chances to agonise over, to conjure the thoughts of what might have been. It wasn’t hard to imagine, in some corner of the stadium in Bratislava, the poignant
rendition of the Fields of Athenry that would defiantly have been belted out by fans who had seen this sort of thing too many times before.

And that, perhaps, was always the danger of this amended succession plan, that Stephen Kenny would face a play-off early in his reign, long before his ideas had had time to take root, that would shape the mood for everything to come. Three games played, two goals, one defeat
and two draws (one subsequently lost on penalties): it doesn’t seem that brave a new world.

To which the only answer can be: what did people expect? Kenny may succeed as Ireland manager or he may fail, but what has happened over the past month, for all it has set an unfortunate downbeat tone, should only be a minor part of any assessment. He is proposing a
revolution and, however potent the imagery of a statue being toppled or the Bastille being stormed, those do not come about overnight.

Just how ingrained the prevailing culture is was apparent from Mick McCarthy’s co-commentary on Sky. He may have been doing it deliberately to make a counter-revolutionary point or it may actually be what he thinks, but he praised every cross or every ball into the
box, even at one point suggesting that Marek Hamsik’s greatest quality as a player was his willingness to hit long diagonals when the opportunity arose.

International football is a vaguely preposterous institution as it is. Often it seems to function almost as a satire of how the sporting media works. We know from countless interviews with players and coaches the level of detailed planning that goes into management at
elite club level, the remorseless data analysis, the dissection of the opposition, the weeks and months of repetitions on the training ground to get the defensive – and, increasingly, attacking – structures right. And then we expect an international manager to take a bunch of
players who are probably substantially different from the group he had a month previously, and in three days turn out a side that we hold up to impossible standards.

Most international football is broadly unwatchable. Occasionally a team, through longevity or happy accident, slots into place but generally speaking it’s only in finals tournaments, when players are together for a month or more, that the football approaches proper
cohesiveness. Even then, the tendency is for coaches to focus on defensive solidity, partly because that is easier to achieve in a short space of time, but also because of an understandable caution: 0-0s and 1-0 defeats can be written off and forgotten but nobody wants a 5-1 humiliation on their CV. 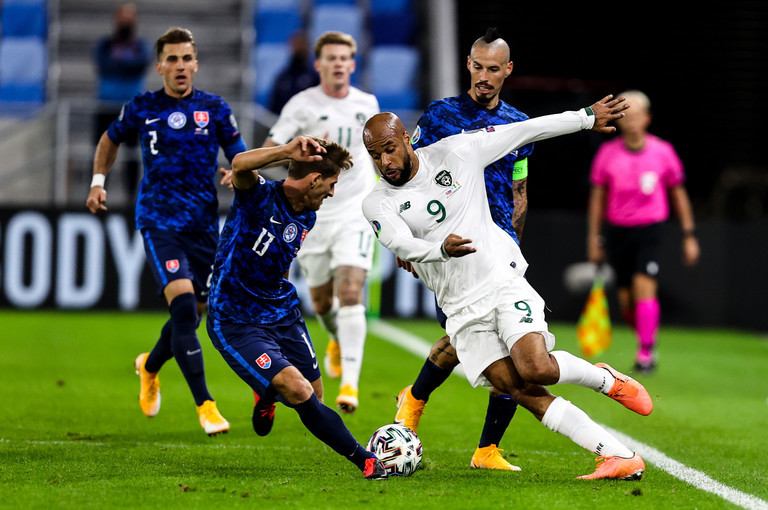 The attitude to Gareth Southgate last month was typical. After two slightly bumpy away games – a 1-0 win over Iceland and a 0-0 against Denmark – there was grumbling about a lack of goals and the need for creativity. That England had lost their previous game against Iceland,
that nobody in living memory has been involved in an exciting game against Denmark, that England had scored 39 goals in the 10 games before that, that Southgate was fairly obviously focusing on developing a midfield base in two matches that didn’t really matter, was ignored.

Similarly, the apparently instant dissatisfaction from certain quarters with Kenny – at least to an outsider – has been bizarre. Even if his rebuild fails, who really will mourn a side whose only discernible attribute was a capacity to draw almost any game 1-1? Do people think the functional concrete blocks of the McCarthy era are irreplaceable?

And there were signs of progress in Bratislava, certainly in extra-time and the final 20 minutes of the 90 when Ireland, after the introduction of Robbie Brady, Alan Browne and Callum O’Dowda, were clearly the better side. Had Browne connected fractionally less well with his near-post dink, this might not entirely unrealistically have been hailed as the first night of a bold new era. Perhaps some of the passing was a little mannered and, certainly in the first half, there was a thought that the only real difference from McCarthy’s football was that this side passed it twice around the back four before lumping it long, but that, in theory at least, will come.

These are very early days and, if the Euros ever happen, particularly if there are actually games in Dublin, Ireland’s absence will sting. But it would be ludicrous for Kenny to carry the blame for that. The way is clear for him now to begin to integrate more of his Under-21s
and impose more fully his philosophy through World Cup qualifying. The time to judge a revolution is not at its beginning but at its end.