In signing Jonny Hayes from Aberdeen, the consensus view is that Celtic have taken the best player in Scottish football not already a member of their squad and convinced him to join.

It wasn't exactly a hard sell, as Brendan Rodgers' men secured a domestic treble in an unbeaten season, but Hayes will be leaving Aberdeen with a heavy heart after five successful years at the club.

Hayes' departure will sting for Dons fans, and it won't be helped by captain Ryan Jack leaving for Rangers, but the Ireland international has soften the blow with the manner in which he has handled himself around the announcement. Firstly, Hayes offered to fund an exchange system for any fans who bought the new Aberdeen jersey with his name on the back already, and then on Sunday he delivered a heart-felt 'thank you' to the club and its fans which has been very well received. 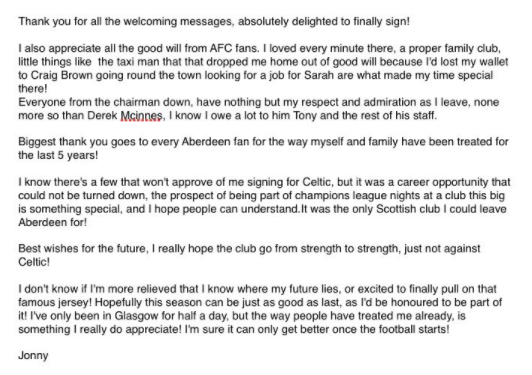 You don't often see a player openly explain their decisions behind joining a new club, but Hayes' honesty will go a long way in terms of making his departure from Aberdeen more amicable.

The reaction on social media was extremely positive.

always were a nice guy but hard work payed off for ya!! Still not most popular with wife but can't please everyone ??

All the best Jonny. Thanks for everything - your name will go down as one of Aberdeen's best ever players AND a proper nice bloke too. Ta!

Leaving the club with a lot of class ?? Probably the most exciting player I've seen in a Dons shirt. Thanks for the memories ?⚪?

Read that in your accent, so I've no idea what it says! Thanks for the 5 years, and your donations to auction. This is a nice touch too. #SF pic.twitter.com/EeAaSdNne2

now, that is how you leave a club & city ?
Congratulations but hope you have stinker whenever you plays the Dons ?

Hayes does indeed have a fantastic opportunity at Celtic but he will have to work very hard to earn his place in the side. While the club looks like they may be losing Patrick Roberts, there is a lot of competition for places on the wings, especially considering Scott Sinclair is a sure starter when fit.

He seems well aware of that fact, so we wish him all the best on his move to Glasgow.