Ireland international Caoimhín Kelleher was thrust into the spotlight yesterday for Liverpool's trip to Stamford Bridge. With Allison forced to miss the fixture due to covid, the former Ringmahon Rangers player was given the task of starting in goal in a massive fixture for Liverpool. He did not disappoint.

Kelleher was outstanding, most memorably in preventing Christian Pulisic from scoring on a one-on-one opportunity in the 63rd minute. There was little he could do for the two goals conceded, as Liverpool shared the spoils with Chelsea.

There has been much debate on this island about the best career route for Kelleher. Should he seek a loan move at a less glamourous club or deputise one of the best goalkeepers in the world? The former route has helped Gavin Bazunu claim Ireland's #1 shirt. But it's clear Kelleher will play a vital role for a depleted Liverpool squad in their coming fixtures. Liverpool play Arsenal Thursday night in their League Cup semifinal and then take on Shrewsbury Town in the third round of the FA Cup. We can only presume Kelleher will start those fixtures.

Yesterday, Kelleher again proved he belongs at this level. Kelleher earned a seven in the Liverpool Echo's player ratings yesterday. The Echo opined: "Super anticipation to stop Pulisic when clean through and saved again from same player second half. Confident in both handling and with ball at feet. No chance with either goal."

It was interesting to hear Liverpool's captain heap praise on Kelleher after the match. Responding to some praise of Kelleher's temperament from Glenn Hoddle in a post-match interview, Jordan Henderson issued some effusive compliments for the Corkman.

Listen, he's top drawer. Every time he's come in, he's been fantastic. The penalty shootout the other week, he was brilliant. He got us into the next round.

Today, he's calm on the ball. Shows great personality. Made some great saves.  I totally agree with you

I thought he was outstanding. We're going to need him the next few games, especially with Ally being out.

Queev's been outstanding and that's been a big bonus for us.

The praise was echoed by Virgil Van Dijk, who was speaking to the media after the match.

"I’m quite a big fan of him. He’s a fantastic goalkeeper. He’s learning from the best, in my opinion, with Alisson."

🗣 "I'm a big fan of him, he's learning from the best with Alisson."

A big week for the 23-year-old starting pretty decently last night in London. 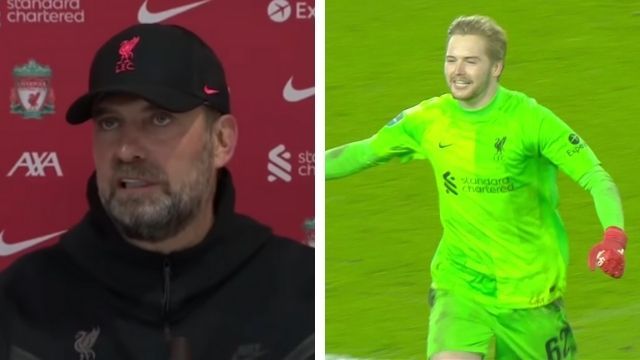