5 Iconic Mourinho Moments From Opening Episode Of 'All or Nothing: Tottenham Hotspur'

Welcome to the Jose Mourinho show!

We were hugely excited about today's release of All or Nothing: Tottenham Hotspur and couldn't wait to get a look behind the scenes at what was a very chaotic season in North London.

The dismissal of Mauricio Pochettino early in the campaign was always going to be an interesting flashpoint, but after watching the first episode of the Amazon show, it is clear that this will very much be focused around the 'special one'.

Jose Mourinho was incredibly entertaining after arriving at the club, so much so that you may find actually find yourself warming to him (against all you instincts).

He produced a number of iconic moments in the first episode. Here's some of the best of them.

***Warning: Some potential minor spoilers ahead***

This honest assessment of himself

Soon after his appointment as manager is confirmed, Mourinho is asked about the misconceptions people may have about him.

His answer is brilliant.

Mourinho: The guy never smiles, the guy is ruthless. I think this is the perception.

Mourinho: The truth is that there is some truth in it. 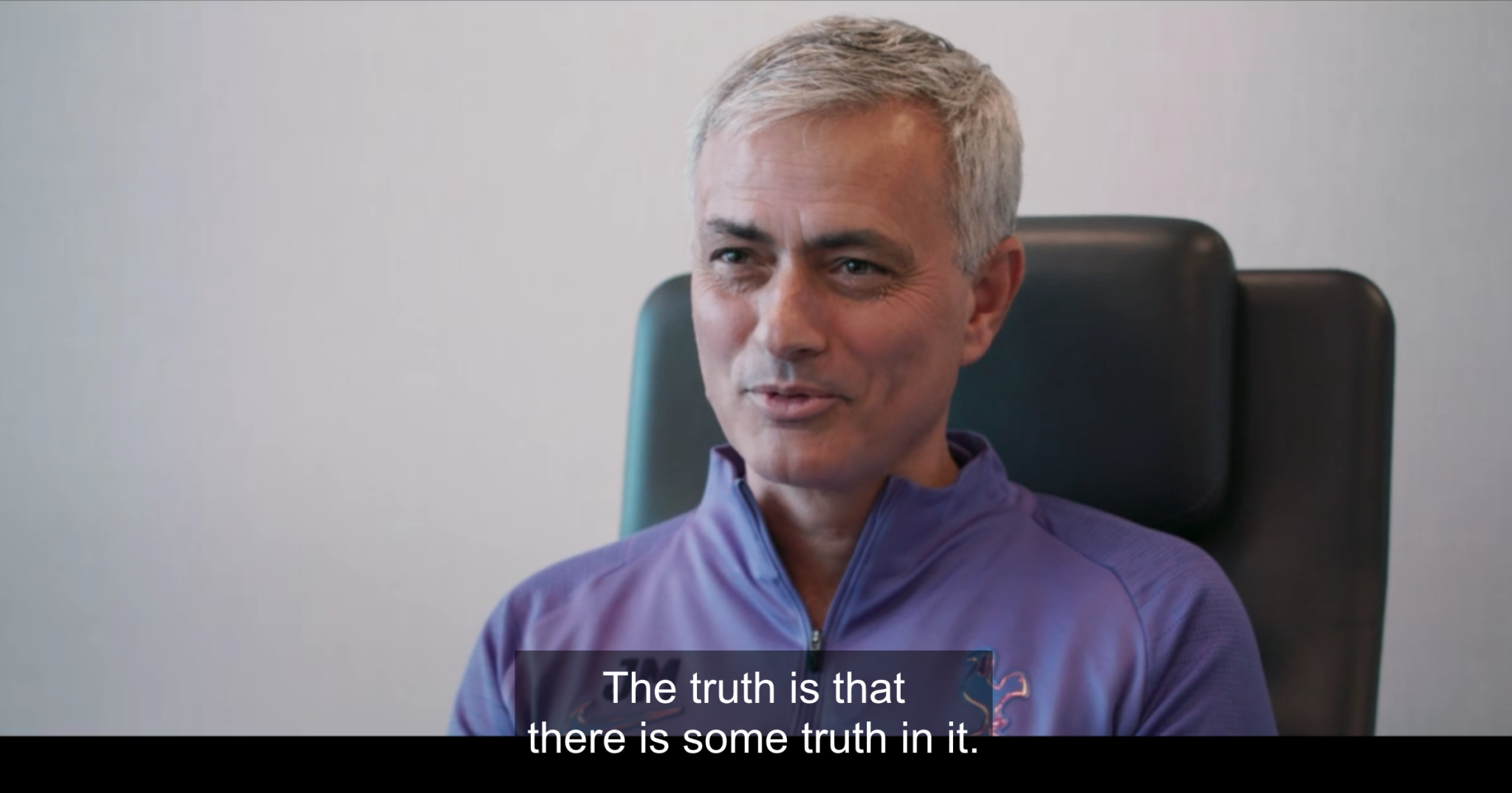 Taking no messing from pundits

This is without the the best moment from the first episode.

Sitting in his new office soon after getting the job, Mourinho is working at his desk when discussion of his appointment starts on the radio.

All the expected opinions are shared about Pochettino's sacking and the Portuguese manager's negative tactics, when the 57-year suddenly stands up and tells the radio to 'fuck off'.

We're not saying we've done nothing else this morning, but we may have watched this 45 times already. One more sure... pic.twitter.com/QkVh9ETObF

Complaining about people getting his name wrong

This would be annoying in fairness. During his first training session with the players, Mourinho makes a conscious effort to pronounce every player's name correctly.

He soon explains to Japhet Tanganga that this is because it drives him mad when other pronounce his name in the Spanish version instead of the Portuguese one. 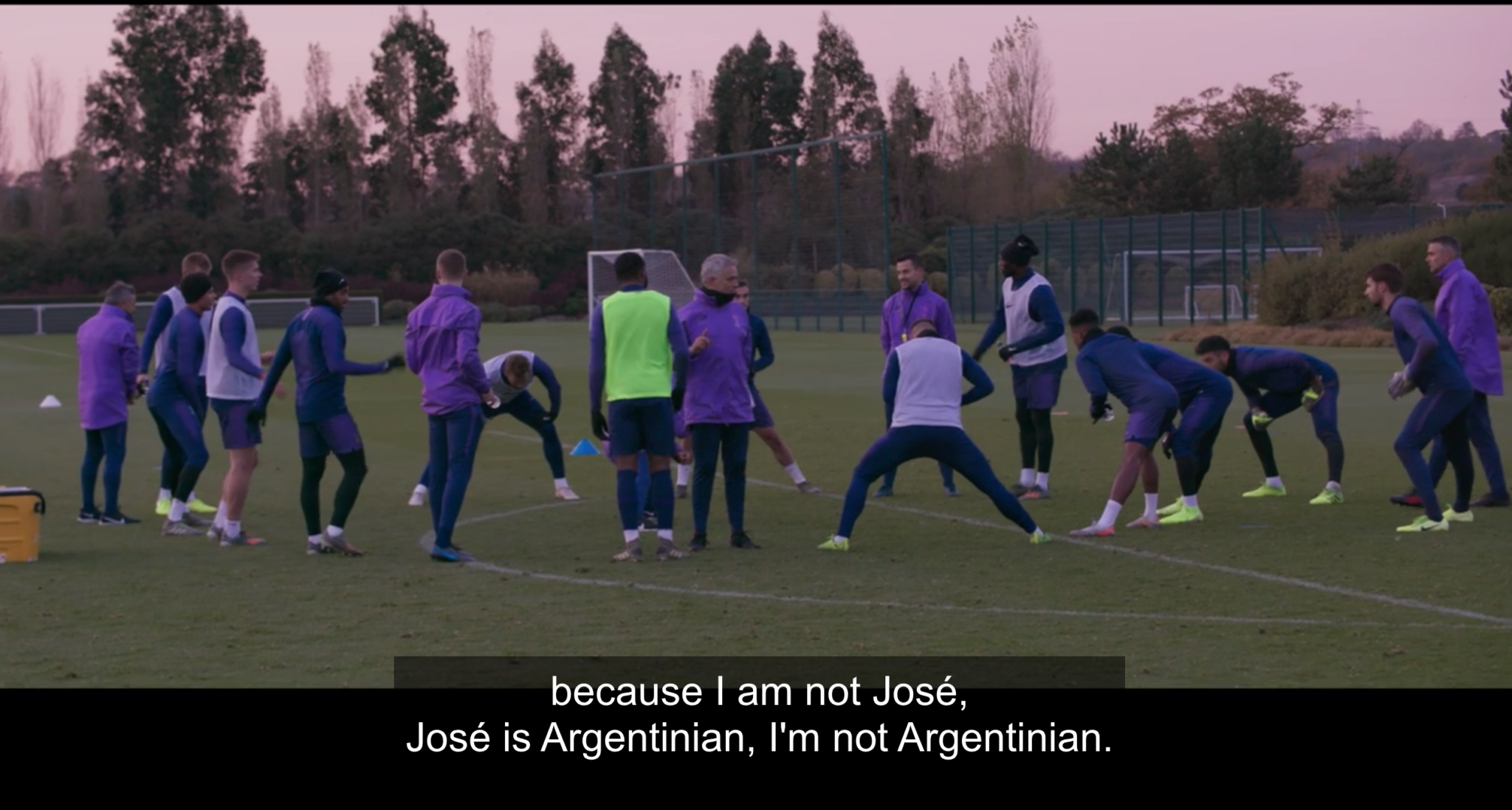 Slagging off Davinson Sanchez about bottling the Europa League final

The man can never resist the opportunity to get in a dig.

Speaking to Davinson Sanchez after one of the sessions, he can't help but remind the Colombian defender of the time he lost the Europa League final against Mourinho's Manchester United whilst at Ajax.

Opening the conversation by asking the Colombian if he had any balls, he then goaded him with:

When you played the final against me with Ajax, everybody shit yourself.

We compact the block. I won the game, minute one. 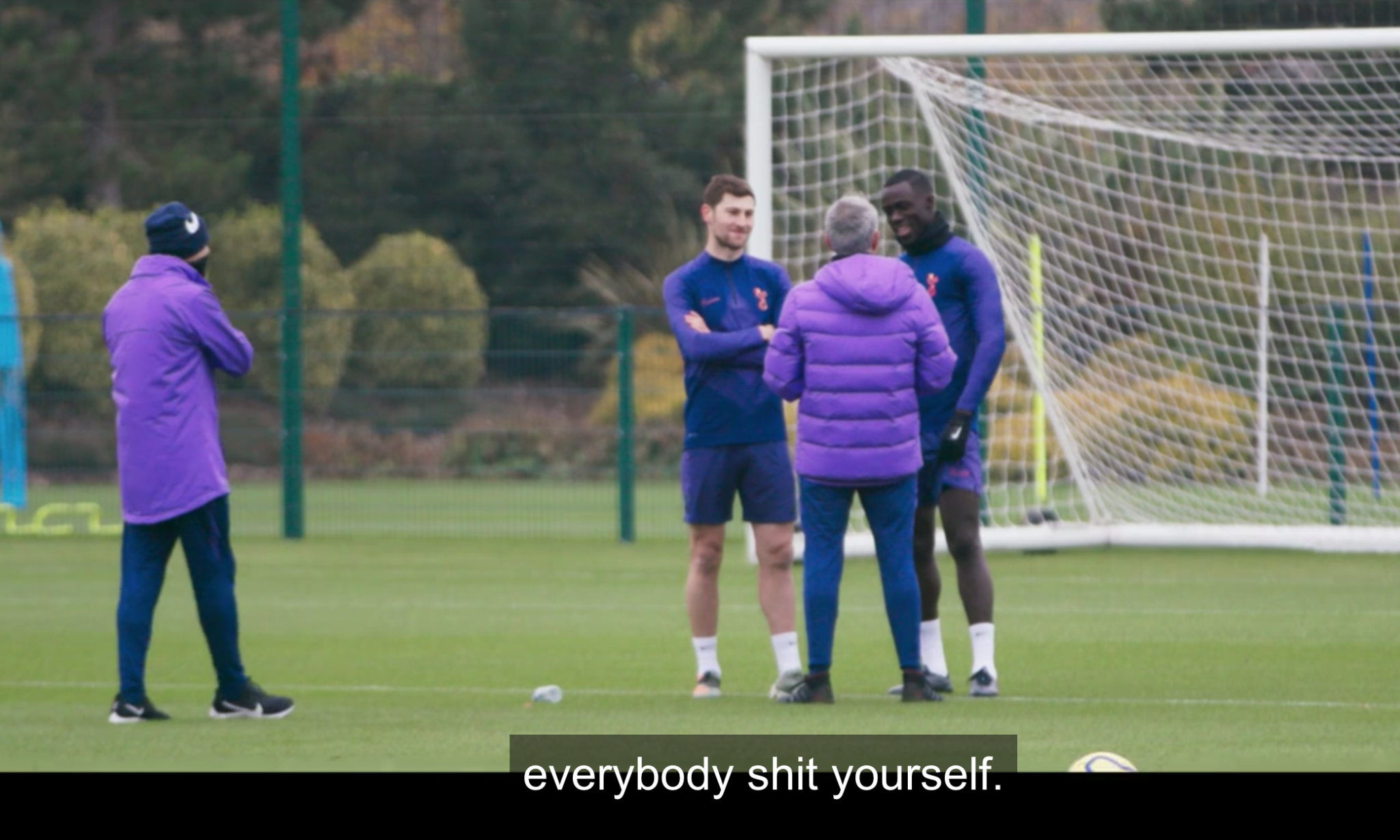 You can tell that Mourinho is fond of Dele Alli, but he doesn't hide the fact that he thinks he's a lazy bastard.

After his first session, he comes over to tell the midfielder:

You are fucking lazy. 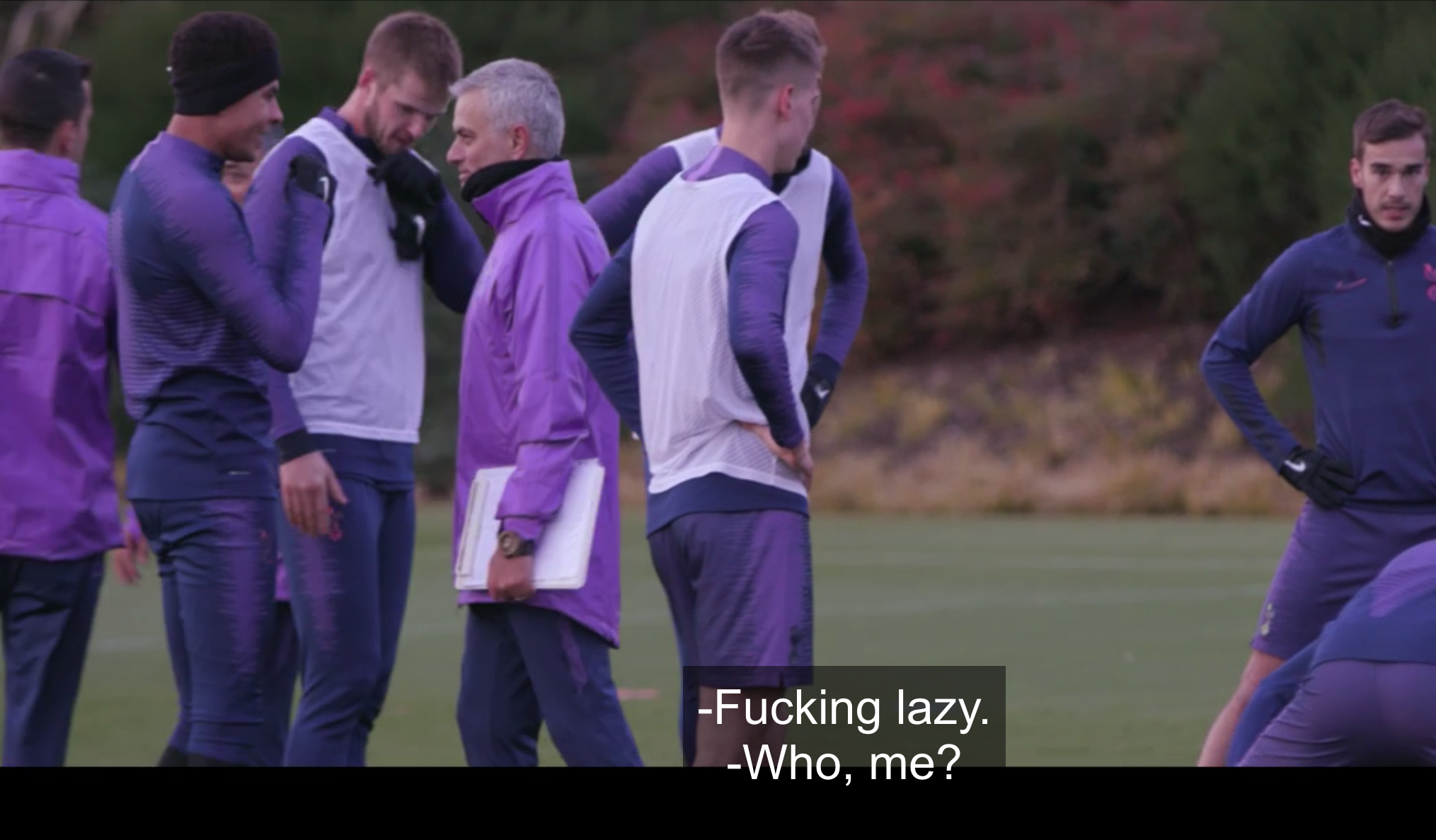 He soon makes the same point to Daniel Levy, who reminds the manger that Alli has gone from being a key player for England to no longer even making the squad. He seems to hint that this is down to attitude.

Before his first game in charge against West Ham, he reminds Alli of his laziness.

Where is Dele? I understood already that you are a fucking lazy guy in training. 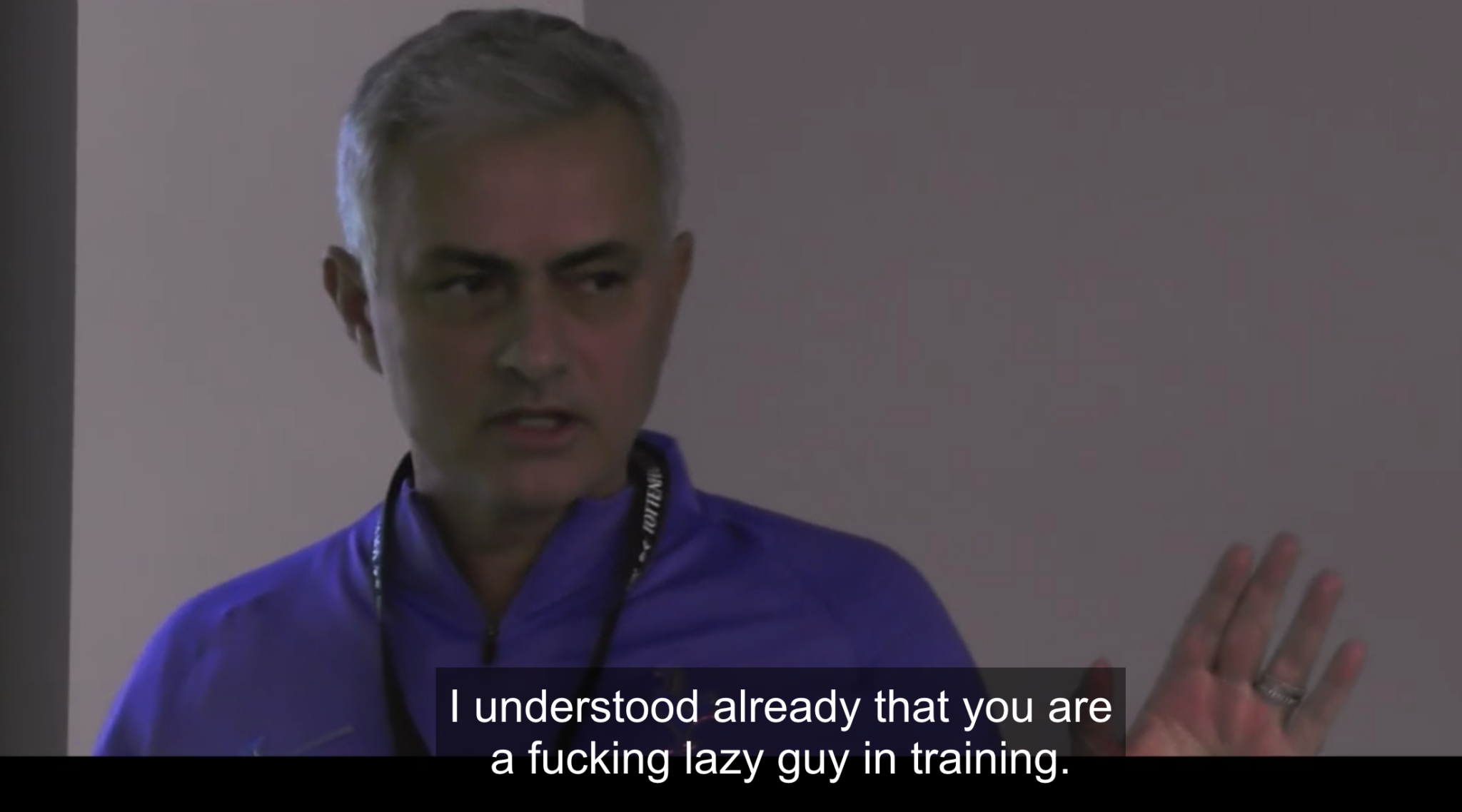 All or Nothing: Tottenham Hotspur Premier League Spurs