Istanbul is already a special place for the Reds following their stunning Champions League triumph against AC Milan in 2005, and once again the Turkish city played host to a continental success for the Anfield giants.

Olivier Giroud put Chelsea ahead in the first half, only for Sadio Mane to level as the match went to extra-time. Mane scored again before Adrian brought Tammy Abraham down in the box, allowing Jorginho to make it 2-2.

Just as against Milan 14 years ago, it took penalties to split the sides as Adrian wrote his name into folklore at a club he only joined at the start of last week.

“What a story – Adrian!!!!!!!!! Like Rocky!” Klopp told BT Sport, referencing the film released in 1977 when the underdog fighter cries out to his girlfriend Adrian after going 15 rounds with heavyweight champion Apollo Creed.

Of course Jurgen Klopp has gone full Rocky Balboa on us 😂

The former West Ham goalkeeper was handed his first Liverpool start in the Super Cup due to Alisson Becker’s calf injury and the Spaniard denied Abraham to secure a 5-4 spot-kick success.

“I don’t know where he was two weeks ago when we were playing Manchester City,” Klopp said at the post-match press conference, referring to the Reds’ Community Shield shoot-out loss.

When I spoke to him the first time, it was clear he would take time to get fit. But he has to be fit now and he is.

He had an incredible game and both goalkeepers made sensational saves, but with Adrian it’s a bit more surprising because it was without pretty much any preparation.

I don’t know when he played his last game for West Ham, being ready like he was, was incredible.

He has already shown me he is a proper personality in the dressing room as well – he was maybe even louder than I was at half-time. He was really on his toes, and that helps us.

Making the save from the penalty is the icing on the cake. I saw he even had time to grab his towel before celebrating, so he’s obviously quick in mind! He has helped us a lot and can be really proud what he did tonight.

The win was not without controversy as pictures showed the goalkeeper off his line before saving Abraham’s penalty.

That subject that did not come up in the post-match press conference, with Klopp hugely impressed by the performance of referee Stephanie Frappart, who became the first female official to take charge of a major UEFA men’s competition event. 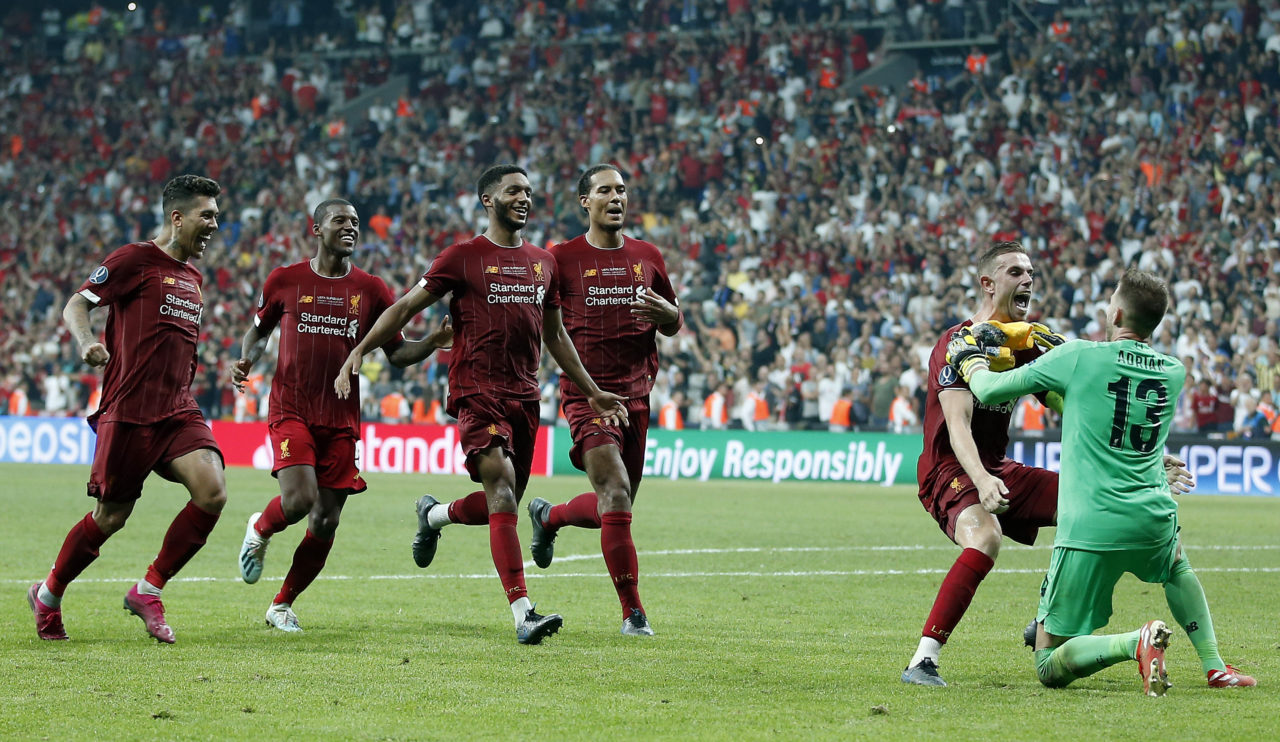 “I spoke to the ref team after the game that if we had played like they whistled, then we would have won 6-0,” the Reds boss said.

“They played a brilliant game. I also said I wasn’t happy with the penalty decision as I’m still not sure but it’s not important any more.

“They were good, they were really good. There was pressure on them like hell. It was an historic moment and they stayed themselves, stayed calm and did what they had to do in a very difficult and intense game.

“I couldn’t have more respect to be honest. It was a really brilliant performance.”

“I have been there, missed penalties. Anyone can,” Lampard said.

I want the confidence of a young player to stand up and want to do that. I said not to worry. He will come back stronger.

It is part and parcel of being a player in the top level, which Tammy now is. These moments come.

We have to be very supportive of him. His team-mates were, I certainly am. That is football.

It was a galling loss fresh on the back of Sunday’s 4-0 humbling at Manchester United, but recently-appointed manager Lampard remained upbeat.

“My overall feeling from the game is one of pride in the team’s performance and happiness,” he said.

“I don’t like losing, I’m a terrible loser as you should be at Chelsea. We wanted to win, but we were very unfortunate today.

“I am proud of the players and if that is a sign of what we can do today then this season we can get better and it’s a really good sign.”

See Also: 'What A Good Player He Will Be' - Millwall Boss Hails Irish Midfielder After Debut

Football
4 years ago
By Barry Arnold
Watch: West Ham Goalkeeper Sent Off After Going Up For Corner And Almost Killing Jamie Vardy
Previous Next

Football
5 months ago
By Balls Team
Adrian Elated After Controversial Liverpool Match-Winning Penalty Save
Football
3 years ago
By PJ Browne
Watch: West Ham Keeper Adrian Scores Remarkable End-To-End Goal Straight Out Of FIFA 98
Football
4 years ago
By Barry Arnold
Watch: West Ham Goalkeeper Sent Off After Going Up For Corner And Almost Killing Jamie Vardy
Popular on Balls
Football
9 hours ago
By Gary Connaughton
McCarthy Stresses Form, But Will He Practice What He Preaches In Irish Midfield?
4

Rugby
11 hours ago
By Gary Connaughton
Watch: O'Driscoll And Dallaglio Speak Nothing But Sense On Saracens Mess