Despite a convincing victory for Liverpool this afternoon, Jurgen Klopp wasn't exactly all smiles after the game against Burnley.

Goals from Diogo Jota and Sadio Mane ensured they would emerge as 2-0 winners at Anfield, with the home side spurning a number of other chances to make the scoreline even more convincing.

While Klopp would no doubt have been happy with many aspects of the game, there was one thing he saw from the opposition that he was not so thrilled about.

Burnley repeatedly challenged his side in the air, often in a reckless manner that left Liverpool players landing awkwardly. Alisson Becker, Virgil van Dijk, and Joel Matip were all roughed up at various stages in the game, with some requiring treatment despite the referee rarely awarding a foul for such incidents.

This is something that has become increasingly prevalent in the game in recent times, with players standing on the ground and nudging their opponents or barging them in the air despite having no chance of winning the ball.

With Premier League referees told to let the game flow more often this season, it could have big consequences in the form of injuries.

Jurgen Klopp is certainly worried by the trend.

Speaking to BT Sport after the game, he said he was not happy the way Burnley went about the game, even if it might be in the rules as they currently stand.

"We always have to be ready for a proper fight, but we were today."

Jürgen Klopp reflects on a physically demanding game at Anfield as his side triumphed Burnley 2-0...

You saw these challenges from Barnes and Wood on Virgil and Joel.

I'm not 100 per cent sure we are really going in the right direction with these kinds of decisions. It's like we are going 10 or 15 years back to the football we wanted to see or whatever.

It's just too dangerous, how we judge these situations.

In the air it's fine, then on the ground they stand still and into the defender. It's just hard.

The rules are the way they are, I'm not sure exactly. The thing is you cannot defend these situations, how are you going to avoid them?

Pope was the first one, then Mee and Tarkowski the next one, that's how they make the game really tricky...

I think it started when we changed the rule 20 years ago to protect the players.

You cannot judge the contact in the air, you have no influence in that. You head the ball and get on the floor again and your leg is not in the right place.

I don't think it's right, but I can't decide these kind of things. I heard that 'we want to let the game flow', but now we have these situations...

You cannot clip the arms of the goalie and say 'this is football'. It's all fine, we need to get used to it, but I think we should think about this.

There is one message now: 'let the game flow'. Now nobody knows what that means...

We have to stick to protecting the players. We can't deny that and say 'that's a challenge I love watching'.

Watch wrestling if you like these type of things.

Of course, employing a physical style of play is something that Burnley need to do to give themselves a chance against sides such as Liverpool, so we can't imagine that Sean Dyche will agree with these comments.

SEE ALSO: BT Sport Panel Were Full Of Praise For Harvey Elliott After His Burnley Performance 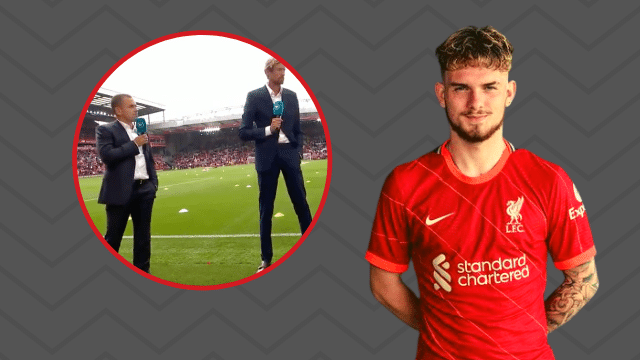