Liverpool ran out 3-2 winners after a thrilling game against Atletico Madrid this evening, with the contest threatening to boil over at points.

The away side scored two early goals to move in front in Spain, only for Atletico to bounce back with two strikes of their own before the half hour mark. It stayed 2-2 until halftime, with Diego Simeone's side having had the better of the chances.

A key moment in the game came only six minutes after the interval, with Antoine Griezmann sent off for this high challenge on Roberto Firmino.

🟥 RED CARD – Antoine Griezmann can forget about a hat-trick after getting his marching orders for a high boot on Bobby Firmino #RTESoccer #UCL #ATMLIV
📺 Watch - https://t.co/2W5kFtUgZE
📱 Live updates - https://t.co/jXI1wvY1ZB pic.twitter.com/n6OTd2J14t

This would not be the final occasion that the referee came to their aid.

Liverpool were rightly awarded a penalty in the closing stages when Diogo Jota was hauled down inside the box, but they were lucky t0 avoid conceding one of their own a few moments later when the same player brought down an Atletico player at the other end.

Having originally awarded the spot kick, the referee would reverse his decision after consulting the pitch side monitor.

Atletico players are incensed as referee Daniel Siebert overturns his original decision of a penalty for a Jota challenge on Giminez. A lucky break for the Reds. #RTESoccer #UCL #ATMLIV
📺 Watch - https://t.co/2W5kFtUgZE
📱 Live updates - https://t.co/jXI1wvY1ZB pic.twitter.com/0q1MEmeE3b

As you can imagine, Diego Simeone was not too please by the decisions that went against his side.

He ran straight down the tunnel after the final whistle, much to the bemusement of Jurgen Klopp.

No handshake between Simeone and Klopp as the Reds edge Atletico in a five-goal thriller! 😮‍💨

These two have some previous bad blood, with the German having been less than complimentary about the way Atletico approach the game in the past.

Speaking after the game, Klopp said he felt the referee made the right decisions on the night. He also addressed the lack of a handshake, saying that neither himself nor Simeone handled the situation all that well.

"I wanted to shake his hand but he was running off. I don't think he did anything wrong."

"Next time we see each other we will definitely shake hands."

Jürgen Klopp reacts to Liverpool edging Atletico and Simeone not shaking his hand at full-time...

Our one is definitely a penalty. I think the other one is not a penalty, but I haven't seen very often where the referee has whistle it and taken it back. I didn't expect that but I think it's the right decision.

The red card is for sure unlucky, but it is a red card, a foot in the face. We have had red cards like this in the past so it can happen, even if he didn't mean it.

It was a tough game. How we win it I couldn't care less. The dirty ones are the really important ones, when we are flying we win anyway but on a night like this getting three points is really massive...

A colleague tried to wind me up, they don't like that (the no handshake). But the situation is clear, I wanted to shake his hand and he didn't want it.

His reaction was not right, mine was not too cool as well. We are both emotional, I am as well, so next time I see him we will shake hands, definitely.

He was obviously angry, not with me but with the game and the world. It was nothing else.

After a cracking game and some developing needle between these sides, we're already looking forward to their next meeting in a couple of weeks. 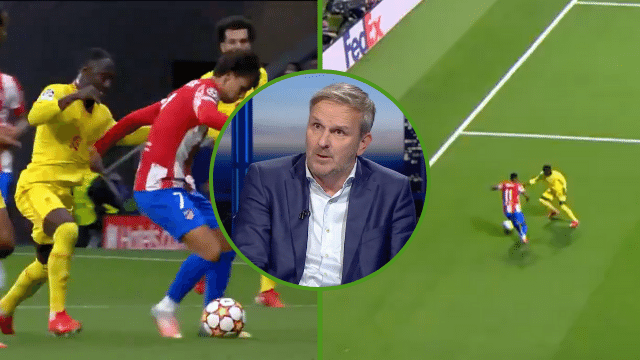