Watch: Jurgen Klopp Was Raging As He Ranted At Paul Tierney After Spurs v Liverpool

Jurgen Klopp was on the warpath both at half- and full-time on Sunday when Liverpool played out a controversial 2-2 draw with Spurs.

In one of the games of the season, end-to-end football was peppered with several seriously questionable refereeing decisions and, after the final whistle, Klopp confronted referee Paul Tierney.

The standard of refereeing in the Premier League was yet again called into question on Sunday, with Sky pundits Jamie Carragher and Jamie Redknapp slamming the officials in both of Sunday's televised games.

Liverpool could feel hard done by with the amount of calls that went against them in their visit to Spurs. They were denied a clear penalty towards the end of the first-half, and Spurs captain Harry Kane was lucky to avoid being sent off for a late and dangerous lunge on Andy Robertson.

Liverpool manager Jurgen Klopp was booked by referee Paul Tierney for his remonstrations on the sideline in the first-half, and continued his protests in the tunnel at half-time.

After the second-half had been played out - with Liverpool left back Andy Robertson being sent off - Klopp marched over to the officials and, after offering a fist-bump, he launched into a rant at Tierney.

Audio from Jurgen Klopp's confrontation with referee Paul Tierney after the game pic.twitter.com/jkcx4slwRk

Klopp's rant included a pointed statement at Tierney, when he said, "I have no problems with any referees, only you, honestly."

That line of protest continued in his post-match interview with Sky Sports, where he questioned whether Tierney had a "problem" with him.

🗣 "I really have no idea what his problems are with me?"

Jurgen Klopp questions the referee after Diogo Jota wasn't awarded a penalty when he was brought down pic.twitter.com/ClJZsZkMup

It would always be helpful if you had played football yourself in the past. When you see the situation again, we ask: where is he stopping?

Two challenges against one player and the player is down. I don't understand it.

Yeah, it's fine, the draw is okay, we are not that crazy that we think we can't draw at Tottenham. That's fine. But these situations are crucial and they are decisive situations, so come on.

The ref and the VAR doesn't say a word. I don't know what his problem is with me, honestly. I have no idea, I have no problem. I think in the beginning, I was a bit more emotional during the games, but it is not allowed in situations like this.

We haven't seen Jurgen Klopp lose the run of himself on the touchline in quite some time, but he was clearly incensed by the decisions in Sunday's game.

In the end, his team took a solid point away from North London - although Klopp will feel it should have been three.

SEE ALSO: Redknapp And Carragher Were Staggered By VAR Madness On Sunday 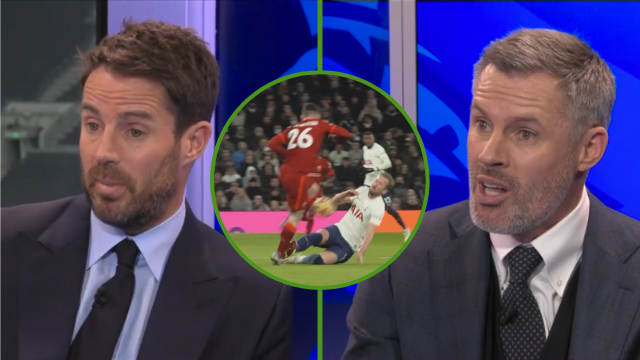