It hasn't been a stellar season for Juventus, but a late penalty in their game with Italian champions Inter last night has handed them a lifeline in their quest to play Champions League football next year.

Juve had won nine league titles in a row, but they've had a rough run of it this season and have thrown away their dominance of Serie A. Yesterday evening's game against Inter presented them with an opportunity to gain revenge on their Milan rivals for taking their league crown off them and - with a bit of assistance from the referee - they managed to do so.

It was a game laden with big refereeing calls, with three penalties and two red cards over the course of the game, and a VAR review for Inter's second equaliser. Cristiano Ronaldo gave Juventus the lead after 24 minutes, as he converted the rebound from a missed penalty, before another former Manchester United man Romelu Lukaku responded with a penalty ten minutes later.

Juve were ahead at half-time after a deflected strike from Juan Cuadrado, but they were a man down shortly after when Rodrigo Bentancur saw red for a second yellow. Giorgio Chiellini's own-goal stood despite a VAR review for a push, before the most contentious refereeing call of them all.

And the referee gives another penalty! 😱😱

Juve back in front in this crazy, crazy game as Cuadrado converts from the spot ⚫⚪ pic.twitter.com/dR4TycEZq0

Having scored earlier in the game, Cuadrado went down very easily in the area after contact from Croatian winger Ivan Perisic. Incredibly, the referee awarded Juventus a penalty and Cuadrado converted from the spot with just two minutes to go to give the Old Lady a tight win.

There was even more contention in injury time, as Marcelo Brozovic was sent off for a second yellow after a late challenge on Colombian Cuadrado.

It was a rare glimmer of hope for Juve, who have luckily worked their way into the top four with one game to play.

However, Napoli's 2-0 win over Fiorentina earlier today means they are in the driving seat.

It was a seriously touch-and-go penalty call for Juventus' late winner and it could have huge ramifications for the top four race. Without the late goal, Juve's Champions League hopes would have been done and dusted, but it's handed them a glimmer of hope going into the final weekend that they could overthrow Napoli.

The long-term implications would be huge - can you really imagine Cristiano Ronaldo will be happy to stay at Juve if there's no Champions League football next year?

Mind you, they still haven't pulled out of the Super League yet - so at least they'll have their three team round-robin with Real Madrid and Barcelona to look forward to if they don't get any more lucky refereeing calls in their last game. 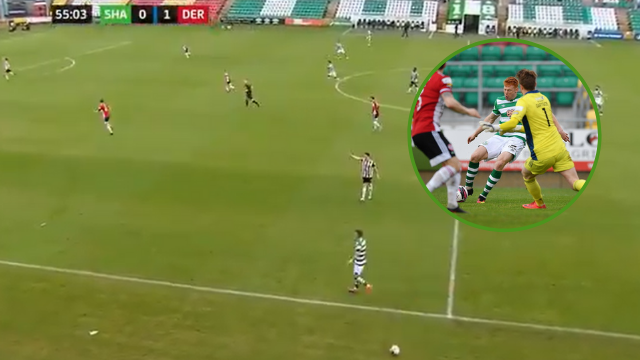