Ahead of Ireland huge Euro qualifier against Ukraine next week, it's hugely reassuring to see one of our key players come into the game in top form.

Katie McCabe has been a very important player for Ireland for quite some time, bringing that form to club level with Arsenal as well. She was in the team for the North London derby against Spurs this afternoon, put in a cracking display as her team ran out 6-1 winners.

It was McCabe who got the rout underway inside the first five minutes, producing a stunning free-kick to give Arsenal the lead. Look at this for a hit:

Arsenal would find themselves 3-0 up inside the opening 15 minutes, with McCabe providing the assist for their fourth towards the end of the first half.

It was once agains from a set-piece, with the Irishwoman picking out the prolific Vivianne Miedema with a beautiful disguised pass.

Running RIOT! 😱@ArsenalWFC have a fourth - who else but @VivianneMiedema?! #BarclaysFAWSL #NLD pic.twitter.com/z7hAeQ8lit

The Dutch striker would complete her hat-trick before the interval, with Arsenal adding a sixth in the second half to ensure a comfortable victory.

Ireland head into Friday's game against Ukraine knowing that a win puts them in an excellent position to qualify for next summer's European Championships.

A victory would ensure a place in the top two in the group, which would guarantee a play-off to get to the finals in England. The three best runner-ups from the nine groups will also go straight into tournament without the need for a play-off, with Ireland right on the bubble of the top three as things stand.

Here's hoping for a big win in Tallaght on Friday night. 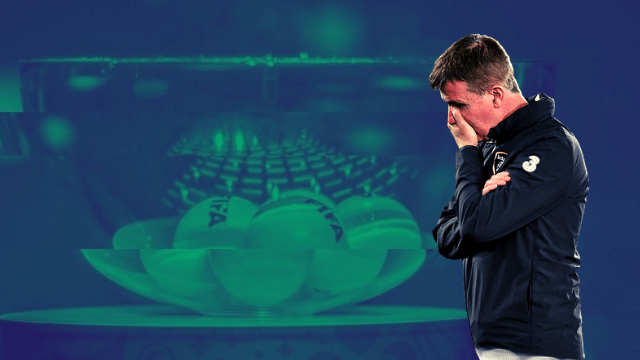 Football
1 week ago
By PJ Browne
Who Ireland's Captains And Coaches Voted For In FIFA Best Awards
Football
1 week ago
By Jonathan Byrne
New Arsenal Signing Has Interesting Implications For Katie McCabe
Football
1 month ago
By Jonathan Byrne
McCabe's FA Cup Glory Hampered As Dominant Chelsea Take The Spoils
Popular on Balls
Football
2 days ago
By PJ Browne
Ireland's Lee O'Connor Says It Was An 'Easy Decision' To Leave Celtic
Football
1 day ago
By Eoin Harrington
Quiz: Name Every Player To Score In A Champions League Final
Rugby
23 hours ago
By Colman Stanley
Roy Keane Made Quite An Impression On Eddie Jones And The England Rugby Team
52