Katie McCabe Focusing On The Positives Despite Ireland's Slovakia Slip Up

In many ways, Ireland's game against Slovakia in Tallaght Stadium was seen as a must win for Vera Pauw's side.

Of course a failure to do so would hardly be terminal for their hopes of finishing in the top two, but it was an opportunity to strengthen their grip on a play-off spot after the win in Finland last month.

That may have been the narrative before kick-off, but by the end of the 90 minutes, those involved in the Irish setup were probably a bit relieved to come away with a point.

Ireland did not perform for large patches of the 1-1 draw, and while there would be some moments of quality throughout, it took two moments of brilliance to secure a point. One came from Katie McCabe in scoring their only goal of the game, while Louise Quinn made an equally impressive contribution at the other end to keep the game level in the closing stages.

Speaking to the media after the game, McCabe admitted that it was somewhat of a relief to come away from the game with a point.

I think it’s a good point, especially with that chance Louise blocked at the end. Slovakia have a really good quality squad and a few tricky players.

It was a good point tonight but we can’t dwell on it, we need to keep moving on. There’s a lot of football still to be played...

You can see that they had a good night will really good passages play. You can't take them for granted, which we didn’t.

McCabe was without doubt the outstanding player on the pitch on the night, carrying over the club form that saw her named Women's Super League Player of the Month for October.

Her goal was moment of immense quality, showing remarkable composure to steer the ball into the bottom corner despite being in the midst of a full sprint.

GET IN!
Katie McCabe equalises

The Arsenal player gave teammate Denise O'Sullivan a huge portion of the credit for the goal, while also praising the home crowd of over 5,000 supporters for helping them back into the game:

When Denise picks it up it’s my job to make forward runs down that lefthand side because I know she can find me. She shoved off a player, played me in, and obviously I was delighted to see it hit the back of the net.

From then on I thought we could keep pushing which we did, we showed great character. We just need to tidy up and take those positives into Tuesday (against Georgia)...

[The support] is brilliant. They ultimately got us over the line tonight, in the second half especially. They kept pushing us until the 95th minute.

There are no words here for how they cheer you on. Hopefully they can come out again on Tuesday and get behind us and we can put on a good performance for them.

That game against Georgia is now a must win if Ireland have ambitions of qualifying for the World Cup. As the bottom placed side in the group, no less than three points will do.

A victory would put Ireland back on track despite the Slovakia result, with a huge amount of football still to be played in the group.

While Vera Pauw's side will be favourites, McCabe is taking nothing for granted.

It’s a big one. Like I said, they're all as big as each other. We can’t take Georgia for granted, they’re a difficult opponent and have quality players in their side.

We have to respect that and try to find solutions to try and get the win...

There’s still a lot of football to be played. We have Sweden away, Finland at home, Slovakia away, Georgia twice. There are plenty of games. We will see towards the end of the campaign.

Here's hoping that they can get the job done and close out the year on a high. 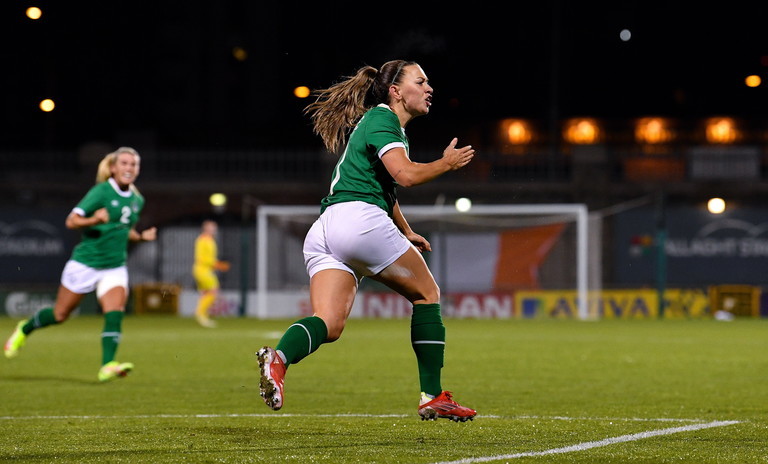