As Liverpool turn their attention to Brentford this weekend, a lot of praise has gone the way of Liverpool's youngsters midweek.

A Carabao Cup affair on Tuesday saw The Reds field a youthful eleven. The risk paid off in a convincing 3-0 win away from home.

First-team debuts were handed out to Kaide Gordon, Conor Bradley, and Tyler Morton. In goal, Caoimhín Kelleher was more than just a fill-in.

With minutes to go until half-time, the Republic of Ireland international pulled off a remarkable save to deny Norwich and Christos Tzoli.

Christos Tzolis's penalty was saved by Caoimhin Kelleher and Norwich failed to take advantage of the chance to get back in the game!

📺 Watch the second half live on Sky Sports Football pic.twitter.com/6BwsdZ5WRM

After the game, Kelleher was asked about his technique for saving the penalty, which saw him deflect the ball with his legs.

"Maybe it was instinct, I don’t know, I can’t really remember, to be honest," was the brutally honest assessment from the Corkman.

"I managed to make the save, it came off my foot, and then I think Joe (Gomez) made a great block afterwards as well," he told LFC TV.

With all the youthful talent called up to the squad midweek, Kelleher could have been seen as a more senior presence than most.

Having made his first-team debut two years ago from Saturday in the same competition, the 22-year-old knows it can pose a challenge to play with different players.

"It's always difficult when there's a group of players who haven't played together that many times. But I thought we did really well tonight."

The debuts of Bradley, Morton and Gordon were a milestone for Liverpool's academy of sorts, but Kelleher was there to give advice to the youngsters.

"Just do their own thing," he simply said to them. "They're more than capable, they showed they have enough talent."

Kelleher's cool head to save the penalty in the first-half no doubt sparked some confidence in all of his Liverpool teammates.

"(They) didn't look out of place, came in and did really well. So, I think we’ve got great squad depth and a great win," the keeper said.

"So I think 'just keep doing what you're doing and you'll be fine'. And they were," he added. 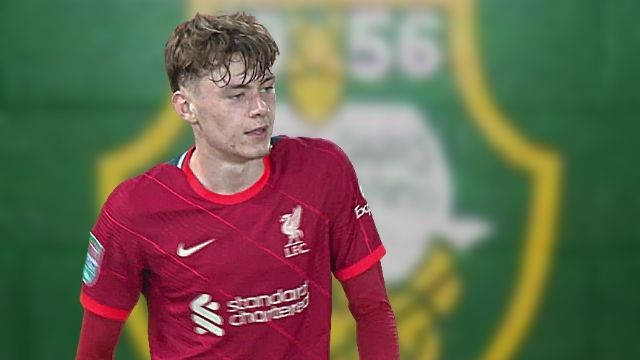 Premier League
1 month ago
By Colman Stanley
Caoimhín Kelleher's League Cup Jersey Gifted To His Boyhood Club
Football
1 month ago
By Gary Connaughton
Seamus Coleman Sums Up Just How Good Gavin Bazunu & Caoimhín Kelleher Could Become
Football
1 month ago
By PJ Browne
Big Ireland Opportunity For Caoimhín Kelleher As Gavin Bazunu Ruled Out
Popular on Balls
Rugby
1 day ago
By Colman Stanley
'I Think Munster Softened Them Up For Us': Sexton Not Carried Away After Clincial Leinster Win
GAA
2 days ago
By PJ Browne
Mayo's Padraig O'Hora Using Football To Promote His Real Passion
Rugby
15 hours ago
By Colman Stanley
'That Pace, That Intensity, That Organisation' All Black Legend Has High Praise For Leinster
The Rewind
1 day ago
By Eoin Harrington
Watch: Brilliant Dermot Morgan Dublin Segment From 'The Travel Show' Resurfaces