It wasn’t the first time Mark Kennedy had struck a winner from distance and with considerable aplomb. Arsenal were the recipients, in an FA Cup tie, when the then Millwall teenager swaggered down the left wing and struck an adroit left-footed shot into the roof of the awning of the Highbury net.

The difference between that goal that aided an eventual move to Roy Evans' Liverpool, and an equal feat of dexterity in a European Championship qualifier against what was then Yugoslavia, was the open blue skies from which the bolt struck! Less swagger and more a saunter, Kennedy picked up an undemanding pass before putting two previous misses from his mind, and turning Lansdowne Road into a flurry of fervor with a devastating drive from 25 yards.

It was exquisite, but more than that, it was bold. Mick McCarthy had shown fate in a footballer of technique that wouldn’t have been amiss in the ranks of their Yugoslvian opponents that night.

Now, as then, the Serbian team that welcome Stephen Kenny’s side this evening at the Red Star Stadium in Belgrade will not be short on technique. National legend Dragan Stojkovic has taken over the team and has spoken of his desire to play rhythmic football, that when you watch his side, “you will catch your breath.”

It was hard not to do so when, pre-Stojkovic, they welcomed Steve Clarke’s Scotland side in the play-off final in November for a place at the deferred European Championships; they were that poor. And bereft of ideas.  While David Marshall saving from Alexsandar Mitrovic in the penalty shoot-out was the Kodak moment, what was equally striking was how the Scots performed in extended and controlled passages of possession.

The context, of course, being, that was then. Pre-Stojkovic. But if he is the connoisseur he clearly thinks he is, then maybe he will re-examine the one game of genuine gravity that Kenny has overseen, Ireland's playoff with Slovakia.

Back then, Kenny was at a similar stage to Stojkovic in terms of finding his feet at international level. Ireland were patient and urgent in equal measure and certainly the more positive of the two sides. The defeat on penalties was hard to take. But the idea of what Kenny was trying to do was slowly revealing itself.

Needless to say, it’s been all rather dour since. But Kenny has what feels like a clean slate tonight. If Serbia feel their biggest challenge is to deal with Ireland’s physicality, then the hope is they will overlook what the manager is trying to build; a team that retains possession and builds the play. A robust, stoic and ultimately penetrable opposition; if that’s all Serbia expect, all the better.

Jason Knight could start, and he should start.  His high-energy endeavours are renowned at Derby under Wayne Rooney. As are his leadership qualities. It seems a lot to expect to build Ireland’s energy base around a player who until last month was still a teenager. But if he couldn’t handle the pressure, Rooney wouldn’t have handed him the captaincy.

Knight is likely to be a fulcrum of the Irish midfield in the coming years. His presence tonight would allow the likes of Alan Browne, if included, to allow themselves time to find, create and exploit space.

On the subject of space, it is likely that Kenny will encourage Aaron Connolly to roam into pockets and take those Peter Beardsley learner plates off, and start to show again the bumptiousness he illustrated when he came on the scene first.

Kenny is thoughtful and controlled. He will understand the need to show the Brighton attacker that his belief in him is genuine. Because despite the likes of the miss against Spurs that led to him deleting his social media accounts because of the level of abuse he received, Connolly needs to be given the licence to take chances, and miss. In doing so, pressure can be alleviated, and instincts restored.

If Ireland want to restore heady nights, like that of Kennedy’s sublime winner that flickered to joyous life a late Summer’s evening in 1999, Ireland, and in particular Kenny, will need to do what good managers do. That is, look around at not the players missing, but the assets of those at his disposal. And to then give them structure and on top of that, the freedom to take risks.

It’s accepted that a draw would be a respectable result.  But, is a victory really that unattainable? Kenny can’t let fear hamper his approach. It was the lack of it that saw immeasurable goodwill behind his appointment.

Now it’s time to show that he is willing to lose, once it’s done on the back of a valiant approach. If he does that, the players will follow in a similar spirit. It’s what is done, not what is said, that people draw from in life.

And football is no different. 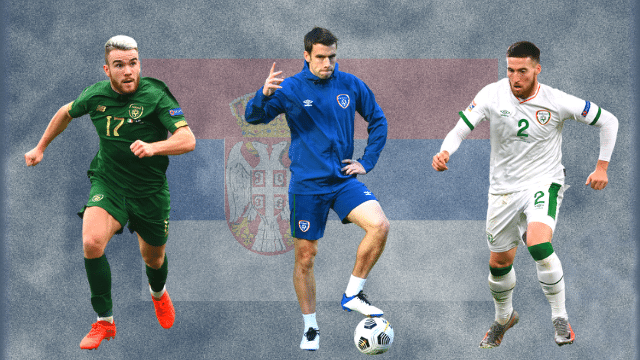