'Kids Being Offered Trials Here And There In England. Leave Them Alone!'

Former Irish international Kevin Doyle has encouraged young Irish prospects to progress through the Irish system before making the decision to move abroad.

Despite the darkness that surrounds the current Irish football administration, there have been some positives in 2019 with the success of underage sides and the talent currently coming through.

This has been a welcome development for Kevin Doyle, who saw it up close in his role in his coaching role with the Ireland U17s. 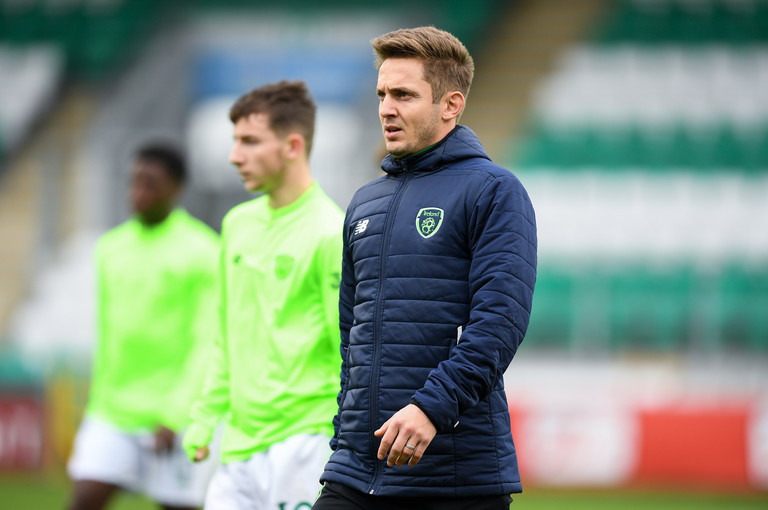 Speaking on Balls.ie's The Buildup podcast, the Ladbrokes ambassador said the progression of young prospects like Troy Parrott and Jayson Molumby is a major positive.

I sat in RTE six months ago and had sort of an argument with Liam Brady which is not unusual. He was saying there is nothing coming through. He could see nothing. No bright light. No young players. I tried to explain to him I think we do have a change coming through. There are young players.

All of a sudden, in the last few months you are seeing that.

In a bid to build on that, Doyles feels the domestic league is an ideal spot for developing players. The former Cork City and St Patrick's Athletic striker suggested there have been major strides made in recent years.

"There is effort being put in by coaches. The facilities, parents ask me about their kids being offered trials here and there in England, they are 13 or 14. I am like 'will you just leave them alone.' Let them be.

"League of Ireland teams all now have it, every coach has badges. The facilities might not be five star Man City facilities but they are all up to a standard that are way better than 15 or 20 years ago.

"They are getting well looked after, training three or four nights a week. League of Ireland gets bashed a lot but that side has definitely improved and will only get better."

For a specific minority, an early move will prove beneficial. But for the majority, home comforts can be a great aid.

"If you are going over 20 or 21 you are going to join a first-team and be involved. You are not going over as a 15 or 16-year-old, basically like a farm animal put out in a field and maybe you go into something, maybe you won't. Get rid of them in two or three years anyway."

"I always remember my first year at Reading I was in the first team, doing really well and these young Irish kids being brought in to introduce me because it was seen as a way to get them to sign for Reading, introduce them to other Irish players in the first-team, I never saw those kids again.

If Man City want you at 14. If they think you are that good, they should be willing to watch you. Bring you over on your holidays and train with them but stay with your club in Ireland, sign when you're 17, 18. 'I will do my coaching, training in the offseason etc.'

If they really want you, they will want you when you are 17. I know that is what John O'Shea did, he signed for Man United but stayed to do his Leaving Cert. They really wanted him so they waited.

"Staying at home going through the League of Ireland, nowadays what they have got, that is the way to do it."

Football
4 months ago
By Balls Team
Here's The Last Irish Football International From Every County In The Country
Football
5 months ago
By Gary Connaughton
Kevin Doyle Perfectly Sums Up Manchester United's Bizarre Transfer Policy
Football
5 months ago
By Gary Connaughton
Kevin Doyle Names Reading Teammates That Could Have Had Huge Careers
Popular on Balls
GAA
3 days ago
By PJ Browne
Mayo's Padraig O'Hora Using Football To Promote His Real Passion
Rugby
1 day ago
By Colman Stanley
'That Pace, That Intensity, That Organisation' All Black Legend Has High Praise For Leinster
GAA
1 day ago
By PJ Browne
Jim McGuinness's Gut Tells Him Dublin Will Win The All-Ireland
The Rewind
2 days ago
By Eoin Harrington
Watch: Brilliant Dermot Morgan Dublin Segment From 'The Travel Show' Resurfaces