Manchester United are not a well run club. Considering their resources, there is no way they should have gone almost a decade without genuinely competing in the Premier League and Champions League.

That is largely down to a lack of leadership at board level, with the club repeatedly failing to bring in the right people in important footballing positions.

The consequences of that are now being felt on the pitch, with their transfer policy perhaps the best example of their failings. United consistently spend massive money on new signings without much thought as to how they will fit into the team.

Speaking on Premier Sports ahead United's meeting with Watford this afternoon, Kevin Doyle summed up just how poor they have been in the transfer market in recent times.

Can Solskjaer turn things around at Manchester United? 🤔@EoinMcDevitt's extremely scientific poll suggests there isn't a lot of confidence 👀 pic.twitter.com/Et6vXnJSdf

We were having this conversation a year ago.

They look like a team that plays five-a-side in training all week, everything is great and they score goals. They have enough fantastic players that will score enough goals to rescue his job every few weeks, but in the big and important games they look like they've never practiced shape, set-pieces, or any of the organisational stuff.

They have players like [Donny] van de Beek, they've spent £30million on him and you think he is going to come into the team. He never gets more than a game or comes off the bench in the 90th minute. It's like they're really trying to take the piss out of him.

It's the same with [Jadon] Sancho, they spent £70million on him in the summer. They've been trying to sign him for a year, offered £100million for him the summer before and didn't get him. Then they sign him for £70million and he's a bench player?

He has played about three games I think, he hasn't got a run of games. When you sign a player for £70million you give him ten games to get his feet under the table and a bit of confidence. Plays one game and then is not in the next day.

Signing [Cristiano] Ronaldo, as impressed as everyone was and the euphoria about it, it was a stopgap and commercial thing.

Donny van de Beek has become a fascination with United fans, who cannot understand Ole Gunnar Solskjaer's unwillingness to give him an opportunity in midfield considering the team's struggles in that area.

When Sancho came that made perfect sense, because you're releasing Mason Greenwood to play in the centre forward position.

Then you sign Ronaldo. Greenwood gets pushed out onto the side and there's no room for Sancho.

That's the kind of muddled thinking that has contributed to the position that they're in.

A big shakeup is needed at all levels of the club. 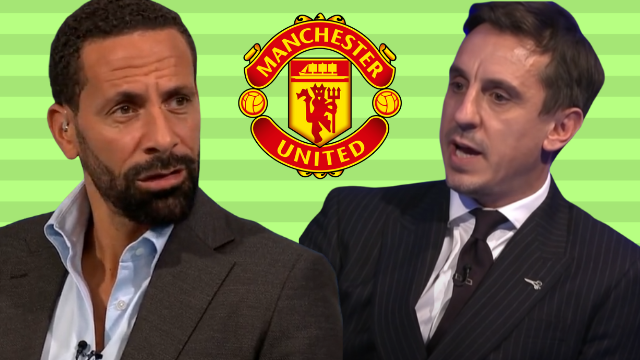 Football
4 months ago
By Balls Team
Here's The Last Irish Football International From Every County In The Country
Football
5 months ago
By Gary Connaughton
Kevin Doyle Names Reading Teammates That Could Have Had Huge Careers
Football
7 months ago
By Jonathan Byrne
Has Jeff Hendrick Finally Found The Right Manager After Five Years?
Popular on Balls
GAA
1 day ago
By PJ Browne
The Draw Has Been Made For Tailteann Cup Opening Rounds
GAA
2 days ago
By PJ Browne
Donal Óg Cusack Defends Dublin Hurlers After John Mullane Criticism
The Rewind
3 days ago
By Eoin Harrington
Watch: Brilliant Dermot Morgan Dublin Segment From 'The Travel Show' Resurfaces
Football
3 days ago
By Eoin Harrington
Alan Shearer Says Roy Keane "Ran Away" From Him After Famous Clash