The Uplifting Story Behind This Heartwarming Image

Last week Germany visited Sweden with both teams more or less assured of finishing at the top of the group. The game itself was chock full with goal, eight in all. But the story of the game happened at the start as the team's lined up with their mascots.

Max along with ten other children were invited along to be mascots for the big game. Max and his friends all suffer from Williams syndrome and as the big moment came, Max started to get nervous and this photo captured the uplifting moment when Kim Kallstrom attempted to reassure and settle young Max.

Update: Max's proud father Emil has gotten in touch to give more detail on what happened last week

My kid Max is very sensitive to loud noises and easily gets scared. That as a fact combined with a arena with 50 000 people can be a rather challenging combination..
We trained for weeks by watching youtube clips, playing cheering crowds LOUD at the stereo etc etc but as I said, its hard to simulate an arena in a 20 sqm2 livingroom.

When is was time to step out on the field Max was very worried, I was sitting in my seat in the stands, but another parent that was in the "players tunnel"  told Max: "Hey look here is Kim - just grab his hand and pretend his your father", and out they went. 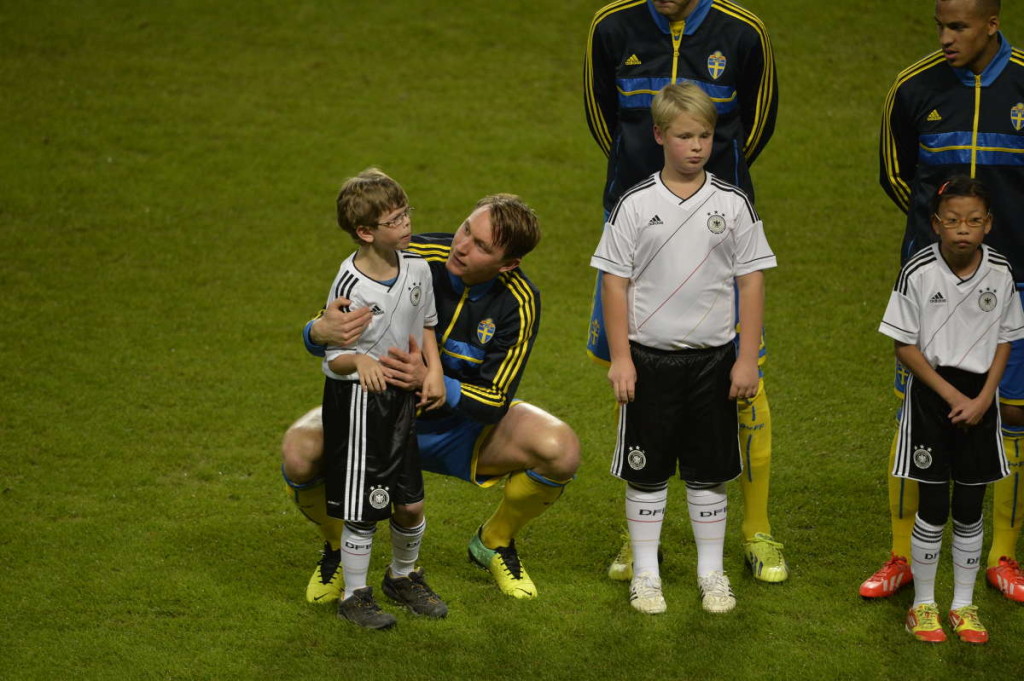 This Norwegian article takes up the story

For Max, Tuesday was the result of weeks of training, motivation, watching Youtube clips, acting like a mascot, and so on, writes the father of the eight year old boy in a letter to the boy's new hero , the Swedish soccer star Kim Kallstrom. Max and ten children with Williams syndrome had the pleasure to be mascots for the Swedish football stars in front of 50 000 spectators during the World Cup qualifying match between Sweden and Germany at Friends Arena on Tuesday of last week. The disease gives children a happy demeanor but they have problems concentrating and relating to the outside world. Still, Max fully realized how great it was going to be to be the mascot for your favorite players.

So great was the occasion that Max had trained for several weeks and dared to go out onto the pitch. He was scared and nervous when the moment came, but was out on the field and lined up with national stars.

The photo has spread like wildfire in Sweden after Max's father Emil took to facebook to pen a thank you letter to the Swedish international.

I am writing to you because I'm not quite sure if you understand how much difference you've made up. Tuesday saw my son Max something very special, for other children, it's really about 15 minutes concentration and nervousness as well as an incredible joy of having been able to meet the national team.

"Of course I'm pleased that Max's dad appreciated what I did during the field entrance, but what's more gratifying is that, despite Max being a little nervous in the players tunnel, together we were fortunately able to make it a very positive experience.

"In a situation like this I act more like neighbor and parent than as the footballer I just happen to be. I realize I have a responsibility to the parents, who probably themselves are a little apprehensive about staying in the stands, but also to the children who enter with us. I try to be calm and comforting and it is usually enjoyed by kids."

The game itself was pretty damn good...

More photos and a Swedish article

Football
2 days ago
By Andrew Dempsey
David Cawley On Returning From Ipswich And Inspiring The Next Generation At Sligo
Football
5 days ago
By Gary Connaughton
8 Players That Turned Down The Chance To Play For Ireland
Gaming
5 days ago
By Eoin Harrington
"Breaking Glass Ceiling": Football Manager's Developers On Adding Women's Football
Previous Next

Football
2 days ago
By Andrew Dempsey
David Cawley On Returning From Ipswich And Inspiring The Next Generation At Sligo
Football
5 days ago
By Gary Connaughton
8 Players That Turned Down The Chance To Play For Ireland
Gaming
5 days ago
By Eoin Harrington
"Breaking Glass Ceiling": Football Manager's Developers On Adding Women's Football
Popular on Balls
Football
21 hours ago
By Andrew Dempsey
Hugely-Talented Irish Teenagers Sign First Professional Contracts With Brighton
Olympics
17 hours ago
By John Dodge
Here's What You Need To Know Ahead Of A Huge Night For Irish Rowing
Olympics
21 hours ago
By PJ Browne
Irish Swimming Relay Team's Olympic Interview Should Make Nation Smile