As Good As Klopp's Knights Are, Liverpool Will Soon Need To Turn To The Infantry

Roberto Firmino could hardly muster a smile as he was embraced by his manager. Though fatigue had been setting in after another day of high intensity pressing and running into space, Jurgen Klopp had waited until the 93rd minute before curling his finger in the direction of the Brazilian. He was knackered.

Four days earlier he had produced 80 minutes of hard graft against Genk. Three days before that it had been a full 90 minutes against Manchester United, immediately after the international break.

Of course the 28-year-old isn't alone in accumulating these numbers. Trent Alexander-Arnold, Andy Robertson, Virgil van Dijk and Georginio Wijnaldum have all accumulated more minutes though when the 27-year-old's game-time is compared with Sergio Aguero, for example, it shows just how reliant Liverpool are on their front man's fitness. Aguero has seen 575 minutes of league action this season; Firmino has seen 834 minutes.

Moreover, Raheem Sterling has played more league minutes than any other outfield Manchester City player this season and he has only accumulated 792 minutes, less than six of Liverpool's players. At this stage of the season these statistics aren't alarming but they do present a worrying trend, a presage of possible burnout for the outfit attempting to win their first top flight title since 1990.

It's difficult to pick faults in a manager that has seen his team, after ten games of the season, string together an unbeaten run, threaten records and keep a six-point gap between his side and one of the greatest Premier League sides in history; and yet Klopp seems to be exuding a hint of fear, a hesitancy to diverge from his tried-and-trusted. Understandable, perhaps, in a squad lacking depth. But that's not the case on Merseyside, especially in the midfield third where there is a debate regarding which three players actually offer the club the greatest sense of balance.

At present, the triumvirate of Fabinho, Wijnaldum and Jordan Henderson is Klopp's first choice, their advantages obvious to even the most casual and ignorant of observers: industry, work ethic, dependency. With a forward line as exuberant as Liverpool's a more conservative midfield may be understandably wise. That's not to say teams are wising up to the Liverpool way and gradually devising systems to limit their overall effectiveness, as was the case yesterday and as was the case last weekend against Manchester United.

Klopp is lucky he has options on the bench that enables him, is he so wishes, to deploy a horses-for-courses philosophy and yet, he more often than not seems to be resisting the temptation to deploy such a course of action.

In Alex Oxlade-Chamberlain last week we saw a player with a mercurial quality, still an undervalued trait in the game, his penchant for spectacular goals from outside the box a nightmare for deep defensive set-ups. His second goal, in particular, had all the hallmarks of a player high on the uber-audacity usually confined to futsal arenas at Melwood.

As Niall Quinn put it on Virgin Media Sport after the game:

I don't think since Glenn Hoddle, 30 years ago, have we seen people be as audacious as this, and to get it so right.

The English man naturally grabbed the headlines the next morning although he probably wasn't even Liverpool's best midfielder on the night. That was Naby Keita.

Brought to Anfield as a box-to-box midfielder with the ability and touch to take a ball forward at his feet, Keita dropped deep to perform regista-style duties in Belgium, becoming the first player in the Champions League this season to make over 100 passes in an away game. With those passes he registered a 93 per cent success rate, and by the end of the game he boasted 11.1 per cent of all possession. He was a prototype for an element in Liverpool's midfield that could garner an ever greater dominance over submissive opponents.

His incisive dink into Firmino for Chamberlain's second goal, taking four Genk players out of the game, was lost in the bewilderment brought on by the wonder-strike. However, it's passes like this that create the space for the brilliance which ultimately followed.

So, he has his critics but the criticism is largely unjustified. And it's baffling Klopp hasn't opted to use these traits to greater effect, especially when the side is struggling to break down excessively defensive outfits. Against Man United, it was the Guinean's patient, simple and perfectly-timed pass out to Andy Robertson that ultimately led to Adam Lallana's goal

A brief moment of hesitancy from Keita essentially deprived Aaron Wan-Bissaka of the opportunity to get out to the full-back and subsequently block the cross leading to the equaliser. Again, it was an extract of play that will go unnoticed but he's registered only eight minutes of league action since August, albeit only returning from injury quite recently.

Outside Liverpool's first-choice midfield James Milner, dubbed recently by Patrice Evra as the toughest opponent he's ever faced, has seen most action though he's only put 239 Premier League minutes on the clock. Every central midfielder in Man City's squad has seen more game-time.

Milner's assist for Mane against Leicester City highlights the undoubted benefits he brings and yet he, too, is used rather sparingly, despite his ability to play in either of the full-back positions which have been permanent occupied by Alexander-Arnold and Robertson, both of whom haven't even been substituted this league season.

How good was this pass? 😲

As well as playing every minute of Liverpool's Premier League season thus far, Robertson has also played all bar 30 minutes of the club's Champions League campaign, an obscene amount of football since August even for a player in his prime like the Scottish international. That's considerably over 1000 minutes in total.

That the European champions, for all the talk of unbeaten streaks, haven't looked their best this season, merely stuttering past teams most weekends, is unsurprising. A degree of mental fatigue, a trait written all over Robertson's form, seems to have crept into the side. The full-back isn't lacking fitness or attacking threat, or defensive commitment for that matter, but he has suffered from poor decision-making at times, an element that was almost absent from his game before the summer.

The same can be said for van Dijk who had been so unbreachable in defence, Tories could have been tempted to leave him standing atop the Cliffs of Dover. In Liverpool's box the thought of having freedom of movement was laughable.

He's still the best in the world, of course. His form just hasn't reached the heights of last season, which must be a worry.

For Liverpool are lucky he hasn't suffered a major injury since joining from Southampton and a little misfortune, as has befallen Man City's Aymeric Laporte, could plunge the league leaders into a crisis.

Joe Gomez, meanwhile, has the look of a player in desperate need of minutes if he is to rediscover some of last season's form. The club's forwards also playing secondary roles for now are suffering from similar predicaments.

While Divock Origi has accumulated some minutes, not a whole pile, Xherdan Shaqiri, when fit, has played less than 20 minutes of football across all competitions. The accusation that he hasn't delivered for the club doesn't hold much water since he hasn't got many opportunities to deliver since arriving at the club, certainly not this season. 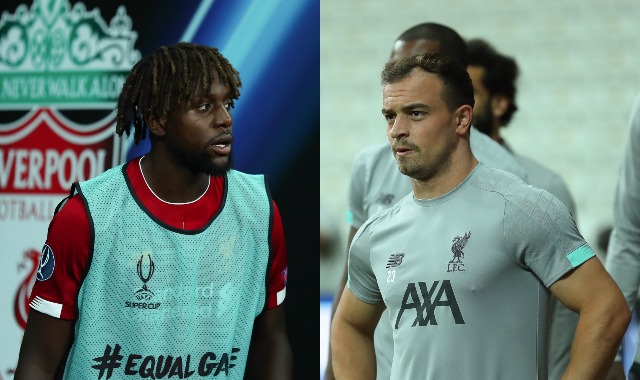 That the wiry winger adds another dimension to the club's attack off the bench makes his lack of exposure to football all the more bemusing. He scored six times in 24 Premier League appearances last year, making three assists, while he also provided two assists in two European fixtures. That translates as either a goal or assist nearly every second game.

Titles have never been won by 11 players. Nor have the been won by 12, 13 or 14 players. And if Liverpool are to overcome a side managed by Pep Guardiola, one that won last year's title with 98 points en route to a domestic treble, they'll have to mix things up, swaying away from the expected as devastating as it has proved.

If under-performing Tottenham and Manchester United can push the Merseysiders all the way, it's only a matter of time before luck runs out. Lady Luck has already given them a generous lack of injuries and some rather fortunate goals ( à la Leicester City and Sheffield United). She'll eventually move on.

Knights only fight so much of the battle. The infantry will, sooner or later, be required and when the time comes they need to be primed. Manchester City's are.

SEE ALSO: Watch: Mane Had To Check With Henderson If Title Comment Was Allowed

Football
2 weeks ago
By Gary Connaughton
Report: Liverpool Would Be Awarded Title If Premier League Season Is Cancelled
Previous Next