Having heard the latest update on the troubles of Ravel Morrison, who was considered to have far more talent than his FA Youth Cup winning teammates in Paul Pogba and Jesse Lingard but simply could not adjust to the life of a professional footballer, it seems as though he will always be one of those players that failed to reach their potential.

His search for stability took him most recently to Rome, and to S.S. Lazio where it was hoped that he could knuckle down, free from the distractions and influences that come with living in his home of Manchester or in London, and concentrate on his football.

But it didn't work out, and now Lazio have joined Manchester United in washing their hands of the England U21 international.

But Ravel Morrison isn't the only link these clubs have together, as in the aftermath of Morrison's news an image of a letter has emerged that was sent to then Man Utd boss Alex Ferguson, from the Lazio supporters, after that famous 7-1 demolition of their bitter rivals A.S. Roma in the Champions League.

The letter has been doing the rounds on social media, and it turns out it is true as Ferguson even replied with a thank you of his own, as was reported by Sportskeeda back in 2013.

Here's what the Lazio fans said to Fergie: 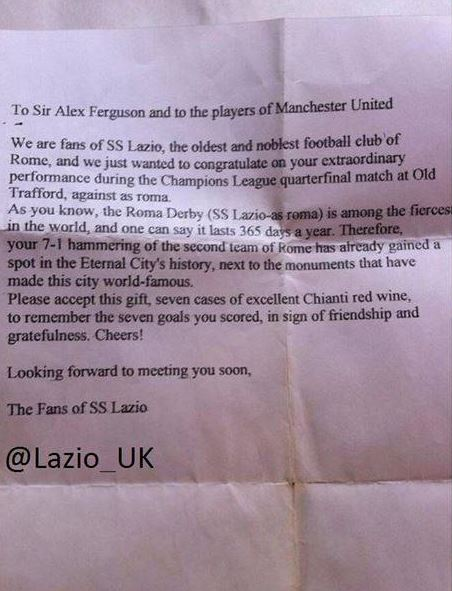 To Sir Alex Ferguson and to the players of Manchester United,

We are fans of SS Lazio, the oldest and noblest football club of Rome, and we just wanted to congratulate on your extraordinary performance during the Champions League quarterfinal match at Old Trafford, against as roma.

As you know, the Roma Derby is among the fiercest in the world, and one can say it lasts 365 days a year. Therefore, your 7-1 hammering of the second team of Rome has already gained a spot in the Eternal City's history, next to the monuments that have made this city world-famous.

Please accept this gift, seven cases of excellent Chianti red wine. to remember the seven goals you scored, in a sign of friendship and gratefulness. Cheers!

Lookking forward to meeting you soon,
The Fans of SS Lazio

And the legendary manager's response: 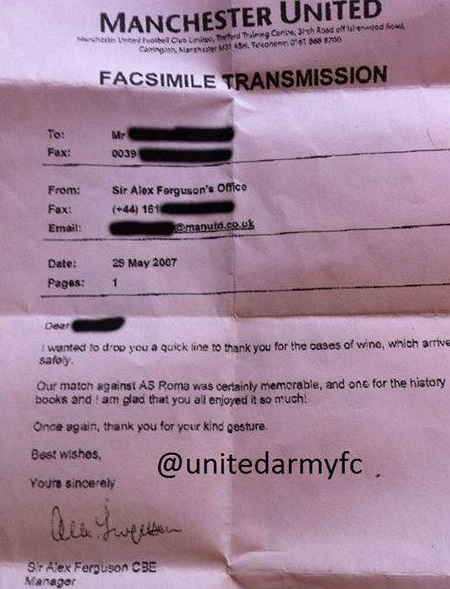 I wanted to drop you a line to thank you for the cases of wine, which arrived safely.

Our match against AS Roma was certainly memorable, and one for the history books, and I am glad you all enjoyed it so much.

Once again, thank you for your kind gesture.

Italian football rivalry is quite remarkable, as they went as far as to suggest that the result would go down in history like the monuments that made Rome famous. They must absolutely worship Alan Smith in some sections of that beautiful part of the world.

It's a game that every Man Utd fan will remember fondly too, as after the first-leg was so closely faught and the tie was still very much in question, to rout opposition at that level in that manner made it one of the great European nights at Old Trafford.