Presenting The Balls.ie Premier League Team Of The Weekend

Chelsea are top - nothing new there.

Spurs are closest to them - nothing new there.

The Premier League was a bit dull this weekend if we're honest, with Liverpool not in action until Monday and the Manchester derby postponed due to the League Cup final, Chelsea were the only big team in action.

Never the less, we picked our best XI from the weekend's action.

The Balls.ie Premier League Team Of The Weekend 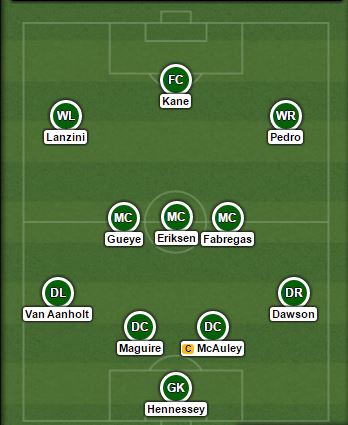 Palace got a badly needed win to get themselves out of trouble - at least temporarily. When they were under pressure at the start of the second half, Hennessey stood tall to make three good saves in the space of five minutes.

Sam Allardyce can thank Patrick Van Aanholt for that victory. The left back took his strike well. So much so, that he got praise form a footballing legend.

Every week, someone tries to stop Gareth McAuley. Alas, every week he gets the better of them. The Northern Irishman had another brilliant week at the heart of West Brom's defence - and he scored again Not only that, he hit the bar too. That's enough to be our captain.

23 years old and coming up against two pacey strikers, Maguire had a solid all round game. Three tackles, four aerial duels won and even a shot on target. Hull are in a serious battle for survival so Maguire needs to replicate this performance more often.

Big Gareth got one West Brom goal but Craig Dawson started the Baggies comeback after a 25 yard belter. Okay, it took a pretty significant deflection, but it was the cap on a fine performance.

CM - Cesc Fabregas (Chelsea)
Fabregas' 300th Premier League appearance and it was one of his finest. A goal,an assist, a shot off the bar and an 86% pass completion rate - higher than any other player on the pitch.

If Chelsea weren't miles ahead at the top ,Eriksen would be the engine that was leading Spurs towards a title. Even against the mighty Joe Allen, the Dane shined with a brace of assists.

It's like he has a cross hair on the edge of the six yard box which he finds every single time without fail.

Nine in a row for Everton. The Toffees haven't lost a game since the Merseyside derby and are top of the form table in the Premier League. Idrissa Gueye was superb, grabbing a goal and finishing with more passes than any Everton player.

Plus, there's this beast of a stat.

Chelsea seem unstoppable in their march towards the title. They were comfortable over in-form Swansea, with the three pronged attack of Hazard, Costa and Pedro overwhelming the Welsh club. Pedro gets in on account of his goal and assist.

Goals number 20, 21 and 22 of the season and there's still still a third to go.Back to back hat tricks in his last two domestic appearances. Do we need to say more?

Lanzini was a constant threat down West Ham's left wing, with seven successful dribbles, four shots and an 85% pass success rate. Daryl Janmaat had a horrible game trying to deal with the winger. The Hammers seem destined to be that mid table team that's nowhere near Europe but comfortably safe - already.

Football
9 months ago
By Shane O'Brien
'I Couldn’t Believe There Wasn’t More Of An Issue Made Of Him Not Being In The Squad'
Football
3 years ago
By David Kent
The Most Shocking Jamie Vardy Fact Of The Season And Other Surprising Stats From The Weekend
Football
3 years ago
By David Kent
Five Tempting Bets For This Weekends Premier League Action
Popular on Balls
Premier League
10 hours ago
By Michael McCarthy
Quiz: Name The Irishman With The Most Premier League Appearances Per Club
1