The great Brazilian achieved the feat for Santos between 1956 and 1974, while Messi is in his 17th season at the Nou Camp since his first-team debut in 2004.

The 33-year-old Argentina ace equalled Pele’s mark against Valencia at the weekend and claimed it for his own after notching Barca’s third goal in their 3-0 win over Valladolid.

Messi’s 2011-12 season, when he scored 73 times in 60 games for Barca in all competitions, remains an astonishing high water mark.

He has passed 50 on five other occasions, with four more seasons in the 40s and at least 31 in every completed season since 2008-09.

The goal against Valencia at the weekend took Messi to another landmark, 450 goals in LaLiga – here are his milestone strikes along the way. 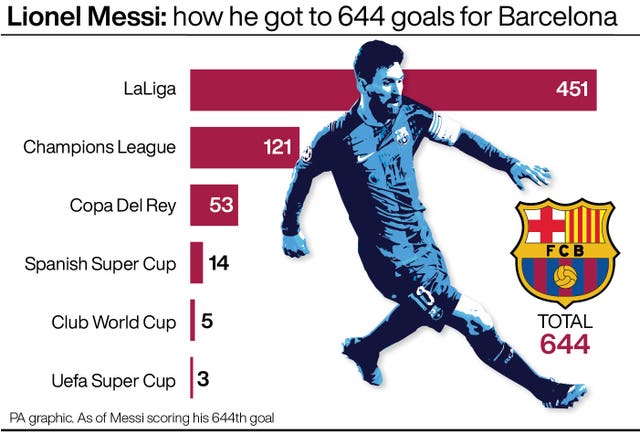 That makes Messi comfortably LaLiga’s record goalscorer, and he is also second all-time in the Champions League where his great rival Cristiano Ronaldo leads the way with 134.

He has won Spain’s Pichichi trophy, for the league’s top scorer, on seven occasions and top-scored in the Champions League six times, including 2014-15 when he shared the honour with Ronaldo and Neymar.

He has scored Champions League goals in 16 seasons, matching Ryan Giggs’ record, and unlike the former Manchester United man he has done so in consecutive years dating back to 2005-06.

Sevilla are Messi’s favourite opponent, with 37 goals against them while he has 32 against Atletico Madrid.

Saturday brought his 29th goal against Valencia, with 26 against Real Madrid in El Clasico and three other opponents facing 25 Messi goals apiece.

In terms of non-Spanish opposition, he has nine goals against Arsenal and eight against both Celtic and AC Milan.

Messi has scored 48 hat-tricks for Barca, including 36 in LaLiga, with another six for Argentina taking him through the half-century mark for his career as a whole.

He has scored four goals on six separate occasions – in league games with Valencia, Espanyol, Osasuna and twice against Eibar, plus a Champions League win over Arsenal in 2010.

He also recorded one five-goal haul in Europe, against Bayer Leverkusen in the last-16 second leg in 2012 as Barca won 7-1 and 10-2 on aggregate.

Valencia have been on the receiving end of four of Messi’s hat-tricks, with three each against Atletico, Sevilla, Osasuna, Espanyol and Deportivo La Coruna.

SEE ALSO: 'He Has One Skill' - Pele Writes Off Comparisons Between Limited Lionel Messi & Himself 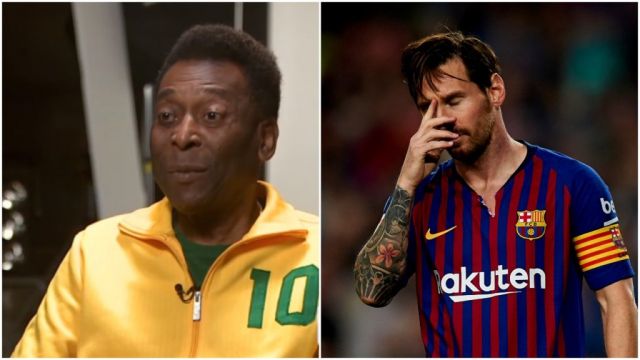 Football
1 day ago
By Balls Team
Messi Gets First Barca Red Card As Stunner Wins Super Cup For Bilbao
Football
6 days ago
By Sean Meehan
Report: A Host Of European Giants Are Lining Up For Free Agent David Alaba
Football
1 month ago
By Gary Connaughton
Barcelona Once Rejected A €250M Bid For An 18-Year Old Lionel Messi
Previous Next

Football
1 day ago
By Balls Team
Messi Gets First Barca Red Card As Stunner Wins Super Cup For Bilbao
Football
6 days ago
By Sean Meehan
Report: A Host Of European Giants Are Lining Up For Free Agent David Alaba
Football
1 month ago
By Gary Connaughton
Barcelona Once Rejected A €250M Bid For An 18-Year Old Lionel Messi
Popular on Balls
GAA
4 hours ago
By PJ Browne
'Sport Gave Me An Outlet. It Gave Me Something To Channel That Anger'
Football
8 hours ago
By PJ Browne
St Johnstone Hit Back At 'Completely Inaccurate' Neil Lennon Comments
Football
13 hours ago
By Balls Team
Jamie Carragher Is Worried The Liverpool Front Three Might Have Run Its Course
Aussie Rules
12 hours ago
By PJ Browne
Marinoff Hit With Three-Match Suspension For Tackle That Injured Bríd Stack