The Republic of Ireland's Euro Qualifiers campaign continues tonight as they take on Gibraltar in the Aviva Stadium, fresh from a positive draw away to Denmark. The quick turnaround has prompted some changes, but once again there is no start for Matt Doherty.

The Wolves defender has only started one Ireland game in recent memory, the away leg against Gibraltar. On that occasion, Doherty played ahead of Seamus Coleman. However, it did not work and he was taken off midway through the second half.

Speaking on RTE Sport, Liam Brady bemoaned the 27-year-old's absence since then.

He's had a great season for Wolves, he has scored goals and created goals. To have a player like him on the bench in a game like this is a mistake. I think it's a chance to find a place for him in midfield. I know he said he didn't see Coleman and Doherty being able to play together down that right side, let's see him in another position.

Brady pointed out that in his era, Jack Charlton played Paul McGrath at right back and Ronnie Whelan played as a left back to get his best players into his team. He suggested central midfield as an alternative for Doherty. 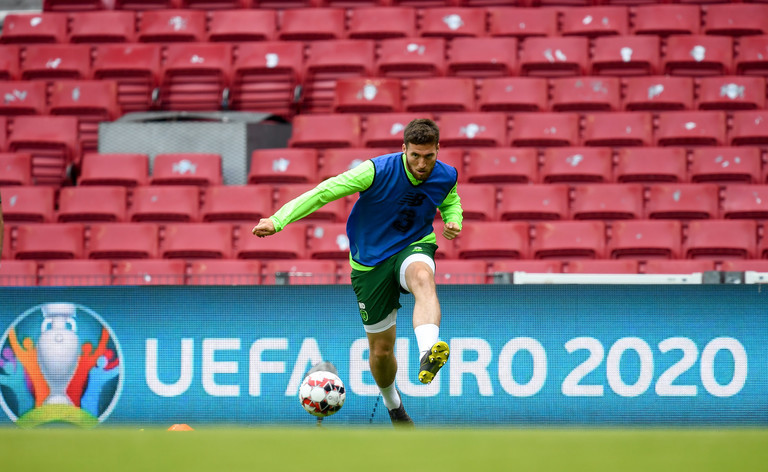 As far as the player himself is concerned, he said at the Aviva Stadium last week that he thinks a Coleman partnership could work.

"I mean, I don’t know. Me and Seamus have spoken about it, what we thought at the time. We didn’t think we were that bad actually.

"Not much came off in that game for anybody really, it was just one of those games. I think we believe that we can play in the same team, that we can work together, but that’s not our choice."

As for manager Mick McCarthy maintains that it didn't work and has no future, so for now Doherty looks set to continue to play back-up to the Irish captain.

Football
2 weeks ago
By Balls Team
"Well You Can Stick It Up Your Ass!" - Liam Brady On What Inspired Him To Seek A Career In Italy
1

Football
3 months ago
By Aonghus Ó Maicín
Irish Footballers In Italy: A Century Of Adventure
2

Football
2 weeks ago
By Balls Team
"Well You Can Stick It Up Your Ass!" - Liam Brady On What Inspired Him To Seek A Career In Italy
Football
3 months ago
By Aonghus Ó Maicín
Irish Footballers In Italy: A Century Of Adventure
Football
4 months ago
By Mark Farrelly
Man United's Scout Tried And Failed To Woo Eamon Dunphy's Mother With A Turkey
Popular on Balls
Premier League
23 hours ago
By Gary Connaughton
Jamie Redknapp Really Put The Jinx On Thiago Silva Before West Brom Game
12