Lionel Messi produced a late goal and a poignant celebration as Barcelona enjoyed a dominant 4-0 LaLiga victory over Osasuna.

In Barca’s first home game since the death of their former player Diego Maradona, the Catalan club were convincing winners at the Nou Camp.

Maradona’s fellow Argentinian, Messi, fittingly scored the final goal in the 73rd minute, and celebrated by taking off his shirt to reveal the number 10 jersey of his youth team, Newell’s Old Boys, in tribute to Maradona, who represented the same club towards the latter stages of his career.

Martin Braithwaite opened the scoring just before the half-hour mark, with Antoine Griezmann doubling their advantage with a stunning volley shortly before half-time. Philippe Coutinho made it three on 57 minutes before Messi sealed matters.

Griezmann created Barca’s first chance of the encounter, crossing to Coutinho who was poised to tap the ball in but saw his effort blocked on the line by defender Unai Garcia.

France international Griezmann pushed forwards again minutes later and produced a long-range shot, but goalkeeper Sergio Herrera anticipated the danger and made a neat save.

Barcelona became increasingly threatening as Griezmann unleashed another shot, this time curling just wide of the post, and Coutinho also tested Herrera with an effort that was well blocked.

Braithwaite broke the deadlock after 29 minutes, linking up with Coutinho and forcing Herrera into a double save before finally finding the back of the net with his third attempt.

Ten minutes later Barca keeper Marc-Andre ter Stegen had to fend off two shots from Oier Sanjurjo and Garcia before an effort from Ante Budimir crossed the line, but there was an offside in the prior passage of play and the goal was quickly ruled out.

Instead it was the hosts who scored the next goal three minutes before the break, with Jordi Alba’s cross cleared by Jon Moncayola before Griezmann intercepted and volleyed superbly past a helpless Herrera.

Moncayola then attempted his own volley in the second minute of first-half added time, but his effort swung off target and failed to worry Ter Stegen.

Shortly after the break Frenkie De Jong was handed a chance to provide Barca’s third goal when Messi crossed, but the Dutchman could not find the target with his header.

Coutinho made it 3-0 in the 57th minute when he laid off to Braithwaite before running into the box and tapping in from Griezmann’s unselfish pass.

A PHENOMENAL hit from Antoine Griezmann! 💥

He couldn't have struck it any sweeter than that 😍 pic.twitter.com/JAt0y8iRQS

The former Liverpool man was then replaced by Ousmane Dembele, who quickly hit his stride when collecting a Francisco Trincao ball and producing what looked to be Barca’s fourth goal, but the effort was disallowed after a VAR review identified offside in the build-up.

The hosts did not have to wait long for another goal, though, with Messi unleashing an unstoppable strike which flew past Herrera in the 73rd minute.

The goal moved Messi to 641 goals for Barca – within two of equalling Pele’s record tally for one club – and he marked the strike with his Maradona tribute.

The hosts threatened to add a fifth goal as time ran out, Dembele finding the side-netting and Messi pushing Herrera into an impressive save after a free-kick, but neither shot hit the mark.

Osasuna were unable to make any impact at the other end and the final whistle blew on an emphatic home win.

See Also: Roy Keane Reveals The Only Time He Ever Saw Diego Maradona In Person 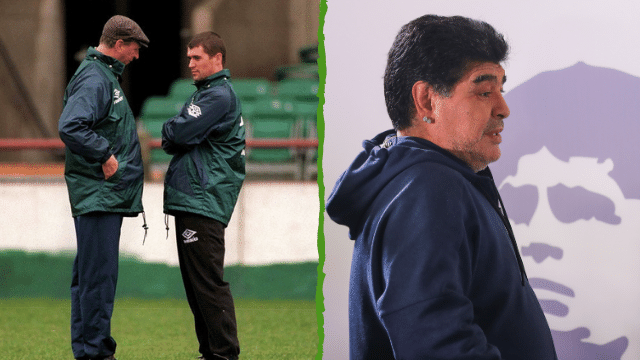