What Was The Most 'Irish' Manchester United v Liverpool Match Ever Played?

In the early years of the century, RTE screened a programme called 'Green & Red', a half-hour programme dedicated to Irish players who had played for Liverpool and Manchester United.

Fifteen minutes a side, split by a commercial break, the first half would revolve around a Liverpool player (eg. Ronnie Whelan), while the second would be devoted to a Manchester United player (eg. Paul McGrath). Balls initially thought he might have hallucinated that this programme ever existed but a stray comment from an acquaintance the other day alerted him to the fact that it did indeed go to air.

One of the programmes zeroed in on a couple of Irish supporters of both clubs in the lead-up to a Manchester United-Liverpool game at Old Trafford. Liverpool won the game thanks to a late goal from Danny Murphy, leaving the 'Pool supporter jubilant and the United fan clutching his head in his hands.

While the support for both teams in Ireland remains as intense as ever, it is unlikely we'll need a Volume 2 made anytime soon. Sadly, the level of Irish influence in both clubs in the intervening years could not sustain a second series.

You have to go back to 6 March 2011 for the last time a Republic of Ireland player featured in a Liverpool-Manchester United fixture. John O'Shea, not long for Old Trafford at the time, played the last fourteen minutes of that game in Anfield in which Dirk Kuyt scored a hat-trick and Liverpool won 3-1.

Jonny Evans has played in a couple of Man United-Liverpool games since then, last featuring in Manchester United's 3-0 home win in December 2014. But that's been the size of it this decade. A sorry fact when one considers the rich history of Irish involvement in both clubs. Prior to the globalisation of English football, we could always count on having a few Irish lads on show.

But when was the 'Ireland Derby' at its most Irish?

If we cast our minds back to the black and white era in the 1960s, we see a heavy Irish influence in the Manchester United setup, with players from both north and south, but nothing at Liverpool.

In the 1970s, Gerry Daly and Steve Heighway were mainstays for either side.

But without question, the golden era for Irish involvement in the 'Ireland Derby' was in the 1980s. Big Ron seemed instinctively drawn to Irish players and was notably tolerant of their hard-living ways. On being appointed Manchester United manager in 1981, he quickly snapped up Frank Stapleton from Arsenal and soon after bought Paul McGrath from St. Patrick's Athletic. Kevin Moran and Ashley Grimes were already at the club since the Dave Sexton era. A youthful Norman Whiteside was also emerging around this time.

Over at Anfield, Ronnie Whelan was breaking into the side, while Mark Lawrenson, who played for international football for Ireland on his first visit to the country in 1977, had arrived from Brighton.

Six Irish players featured in a 0-0 draw at Anfield on the 16th October 1982. McGrath wasn't yet in the first team at United. Stapleton, Grimes, Moran and Whiteside all played, with Whelan and Lawrenson on the pitch for Liverpool. (Stats on this courtesy of 11v11.com)

Over the next couple of years, there would never be as many Irish players gathered together on the pitch for this fixture. Grimes departed Old Trafford and while Michael Robinson was introduced at Anfield, it only compensated for the absence of Ronnie Whelan who missed most of 1983-84 with injury.

Six Irishmen played in the 1985 FA Cup semi-final replay at Maine Road, with Jim Beglin joining Lawrenson and Whelan in the Liverpool XI, while McGrath, Stapleton and Whiteside started for Manchester United.

But we had yet to crash the 'seven barrier'. This was achieved in the first League meeting of the following season, 1985-86.

On 19 October 1985, seven Irish players started in a 1-1 draw between Manchester United and Liverpool in Old Trafford. It was the same six who began the semi-final replay in Maine Road plus Kevin Moran. Not only that but Paul McGrath scored the United goal. Future football boot millionaire Craig Johnston replied for Liverpool.

Due to the absence through injury of Bryan Robson, Kevin Moran was handed the captain's armband.

There were more Irish players on the pitch than any other nationality. Five Scots, four Englishmen, two Danes, two Welshmen, a South African and a Zimbabwean accounted for the remainder of the starters that day.

This makes this game the most Irish 'Ireland Derby' in the history of English top flight.

We are able to furnish you with highlights of this historic game thanks to the glory of youtube, specifically thanks to the generosity of Mr. Dave Waller.

A month later, the same seven players started the 4th Round League Cup meeting between the pair. There was some turnover among the other personnel as Big Ron threw the likes of Clayton Blackmore into the mix. 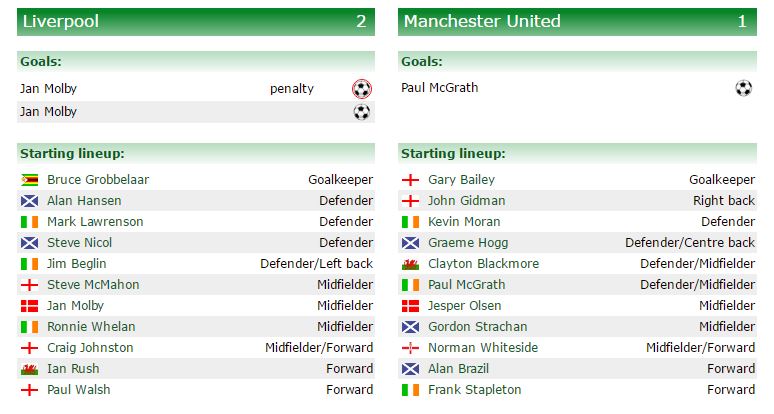 By the end of the 1980s, Alex Ferguson had shipped most of Ron Atkinson's Irish contingent out of Old Trafford, unimpressed by their night-time habits. Liverpool, by contrast, were 'more Irish than ever' in this period, with four internationals in the regular starting line-up - Whelan, Houghton, Staunton and Aldridge.

When Fergie did begin to rebuild his stock of Irish players (well, Cork players) in the early 1990s, Graeme Souness arrived in at Anfield and promptly discarded all the Irish players with the exception of Ronnie Whelan, who himself dropped down the pecking order. The swift sale of Steve Staunton was especially baffling.

It prompted some silly speculation from over-sensitive folk who are rather too attuned to such matters. Inevitably, the fact that Souey had come south from Rangers was mentioned. Years later, while manager of Blackburn Rovers, Souness angrily denounced accusations of anti-Irishness after a scurrilous article appeared in the press. He made the rather compelling point that wife was a Catholic with two Irish parents and that his kids were being raised Catholics. And he seems to have spent the better part of the last decade shooting the breeze with Eamon Dunphy and John Giles.

By the end of the 1990s, Steve Staunton had returned to Anfield to a team that now had Phil Babb and Jason McAteer on their books. We were close to returning to the heady days of the mid-1980s. Sadly, we never saw all three lads on the pitch together against Man United's Cork duo.

In the Old Trafford match in 1998-99, Stan didn't play. While McAteer missed the tumultuous game in Anfield late in that season.

Four Irish players started in that famous 2-2 draw, in which Denis Irwin was sent off by David Elleray for poking the ball in Steve Staunton's direction after it ran out of play and Paul Ince delivered what Alex Ferguson delivered a "gloatingly excessive" celebration on grabbing the late equaliser.

We haven't seen such an Irish heavy Liverpool-Manchester United match in the 21st century. 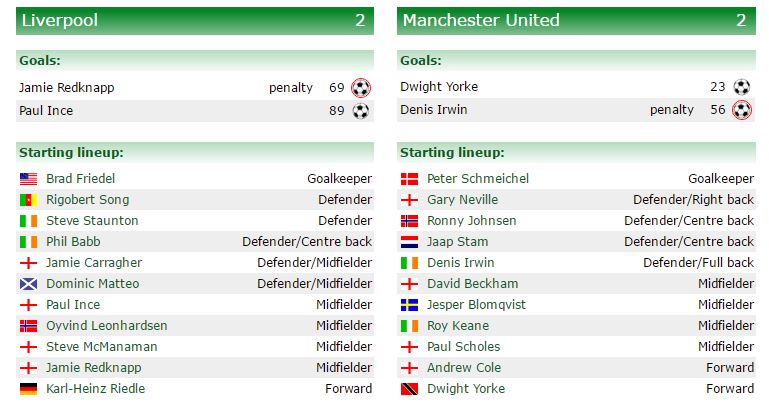 SEE ALSO: Phil Babb Isn't Sure About Ireland Trying To Change Their Style Of Play 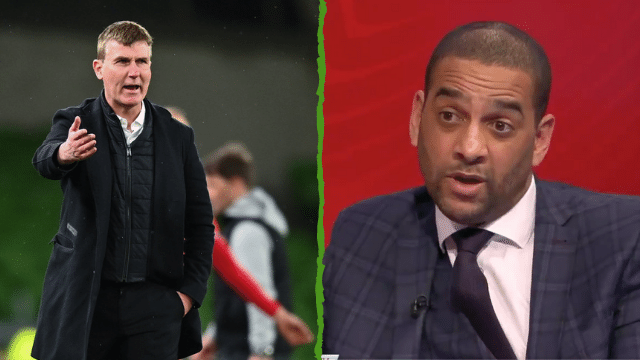 The Rewind
19 hours ago
By Gary Connaughton
Quiz: Can You Identify The Irish Celebrity From Each County?
The Rewind
15 hours ago
By Donny Mahoney
Peaky Blinders Fans Mourn Helen McCrory, Aka Aunt Polly