What Liverpool Need To Do To Escape Group C

Liverpool were on the end of a surprise 2-0 defeat last night in Serbia, as Red Star Belgrade deservedly picked up their first win the Champions League since 1992.

The Reds were sloppy throughout, and could not conjure up any goals despite creating a number of good opportunities.

This is how the group currently stands after four games: 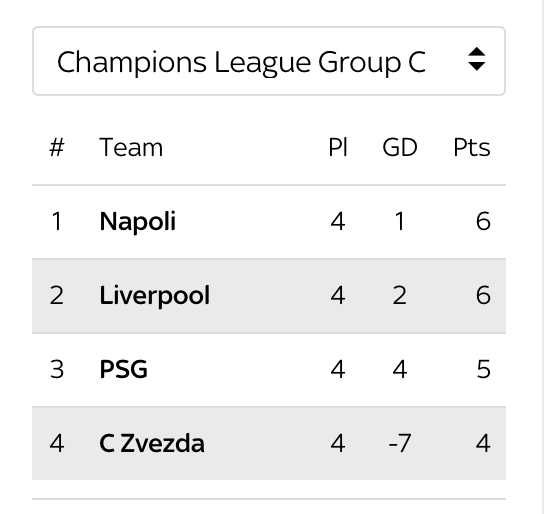 Liverpool are still second in the group, but with two defeats on the bounce their path to the knockout round has become more complicated.

Here are the different permutations for Liverpool to qualify for the knockout stages of the Champions League:

Scenario A - If Liverpool beat PSG

In the event that Liverpool win their next two games against PSG and Napoli, they will qualify as winners of group C.

If Liverpool beat PSG, and Red Star draw with Napoli then Liverpool can lose to Napoli in the final game and still go through.

Scenario B - If Liverpool draw with PSG

In the event that Liverpool draw with PSG next round and Napoli beat Red Star, then Liverpool will need to avoid defeat to Napoli in the final round to guarantee progression as runners up to Napoli, though they will be hoping that PSG drop points against Red Star to go through, which is unlikely.

If Liverpool draw with PSG and Napoli draw with Red Star, then Liverpool will need to beat Napoli in order to go through, or draw with them and hope that Red Star get a result against PSG.

If Liverpool lose to PSG in the next round and Napoli beat Red Star, then Liverpool will have to beat Napoli by more than one goal in the final group game to secure progression as runners up of group C.

If Liverpool lose to PSG and Napoli draw with Red Star then Liverpool need to beat Napoli in order to go through.

Football
1 year ago
By Gary Connaughton
Watch: Edin Dzeko With Some Shocking Theatrics After Touching Heads With Pepe
3

Football
1 year ago
By Gary Connaughton
Ajax: A Model On How To Thrive In A Money-Driven Footballing Landscape
10