Manchester United fans were once again left scratching their head as Tottenham Hotspur steamrolled their side with three second-half goals in 10 minutes, while Louis Van Gaal made the baffling decision to play Ashley Young as a lone striker at half-time.

That crazy choice appears to have been the straw that broke the camels back for the few United fans who were left defending the Dutchman, as it was not the first time he utilised a player out of position to very little effect.

In fact, it has happened so often that we decided to have a go at creating a full XI of players who have been played out of position, and, although he never quite took the bold strategy to play an outfield player in goal, we almost got there. 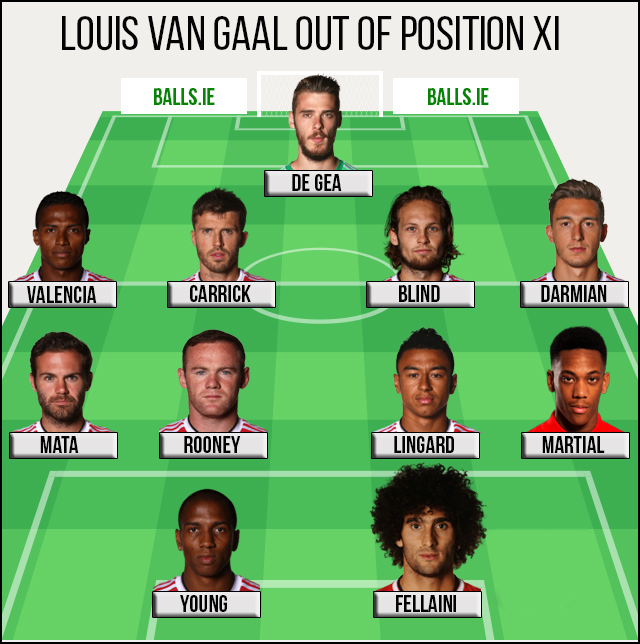 Had to put him in as there has been no people playing in goal that shouldn't have, and it would have been a tad too harsh to accuse that of Sergio Romero.

Despite showing exactly why he shouldn't be a right-back last season, Antonio Valencia made his injury comeback at RB in the Manchester derby and looked typically shakey.

It's baffling how someone with as poor a heading ability as Carrick was put in the United defense, but the squad was so poorly managed that it became a necessity.

The one that kind of worked out, as Blind has been excellent at times, most recently against Lukaku of Everton, but the most recent performance against Spurs hammered home the fact that he just isn't a centre back.

Easily the least outrageous of these choices, however, Darmian was so poor at left back that it may have been partly responsible for his complete lack of confidence in the second half of the seaosn.

If ever there was an attack-minded player who suited the wing position less, it's Juan Mata. A creative mind who thrives on quick passing and as little running as possible, stick him on the wing and ask him to track pacey full-backs up and down the pitch.

Manchester United have never played well with Wayne Rooney in central midfield, despite the cliche that he should move further back as his career goes on. He's a striker.

Mostly at CAM, but also further back on a number of occasions, Lingard's pace is far more suited to a wide position, and the decision to play him centrally is made all the more baffling by Mata's presence on the wing.

Martial has indeed been excellent for United from a wide position, but by keeping him there while Ashley Young played as a striker against Spurs he has to make the list.

What the hell was that? Other than an actual joke to take the piss out of United fans, it's hard to find any solid reasoning.

Little has upset Manchester United fans more in many of their lifetimes than the sight of Fellaini being utilised up front out of sheer desperation.

SEE ALSO: "Let's Go Fosu-Mental" - Why Man Utd's Latest Academy Star Is The Most Exciting Yet

TV &amp; Film
4 days ago
By Colman Stanley
Sport Reigns Supreme In Most Watched Irish TV Of 2021
Previous Next