It's fair to say it has a been a difficult couple of years for David De Gea. Regarded by many as the best goalkeeper in world football at one point, he is now probably more well-known for his consistent blunders on the pitch.

The Spaniard has made a huge number of errors at both club and international level in recent times, with another coming last night.

Spain were taking on Ukraine in the UEFA Nations League, a game they would have been heavy favourites to win, especially when you consider that they beat the same opposition 4-0 only last month. They had also never lost to the Ukranians.

It was a fairly abject performance overall from Luis Enrique's side and they would end up losing 1-0 after an error from their goalkeeper.

He severely misjudged a ball in behind his defence in the 79th minute, getting caught out of position and allowing Viktor Tsyhankov to score the winning goal.

Was David de Gea at fault for Tsyhankov's goal that secured Ukraine's first ever victory over Spain?pic.twitter.com/LYbLxUNqlm

De Gea had previously been under severe pressure for the position of Spain's first choice goalkeeper, but the dismal form experienced by Kepa Arrizabalaga at Chelsea has allowed him to hang onto the number one spot for now.

Speaking after the game, Luis Enrique said he didn't blame the 29-year old for his side's defeat.

You can always do more. But to blame [De Gea]... it's a bad habit, you [journalists] love doing it.

We all could have done more, but in a game like this, if you blame De Gea, let's finish up and go home.

De Gea's dip in form can be traced back to the international stage. He entered the 2018 World Cup regarded as one of the best goalkeepers in the world, but he has never really recovered from his dismal showing at that tournament.

With Dean Henderson now back at Manchester United, a few more errors could see him dropped for both club and country.

SEE ALSO: 'There Were People On The Inside Who Knew The Skulduggery Going On' 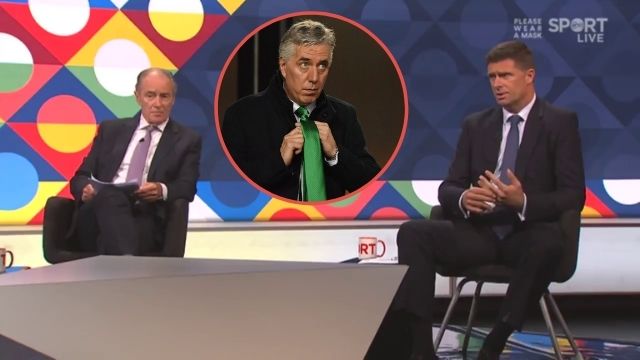 Football
1 week ago
By Gary Connaughton
A Friendly Loss For Ireland Next Month Could Have Massive Repercussions
Football
2 weeks ago
By Balls Team
'Darren's An Experienced Goalkeeper, But He Doesn't Play Week In, Week Out'
Football
2 weeks ago
By Donny Mahoney
The Depressing Stat That Captures The Extent Of Ireland's Goalscoring Woes
Popular on Balls
The Rewind
11 hours ago
By Mark Farrelly
Quiz: Guess The Teenage Disco Song From The Music Video Screenshot
2