With literally no fit strikers available for tonight's clash at Stamford Bridge, one wonders what sort of side José Mourinho will be forced to line out for The Return II: This Time It's In The FA Cup.

It's not the first time United have faced such a bizarre conundrum; six years ago almost to the day (exactly six years ago yesterday, in fact), Alex Ferguson's United team entered an FA Cup quarter-final at home to Arsenal minus a plethora of starting midfielders, and so Fergie was forced to reshuffle somewhat.

For the first and only time in the Ferguson era, United started with SEVEN defenders, including three in a four-man midfield, alongside Darron Gibson no less. Wesley Michael Brown also made one of his final appearances for his boyhood club, as United inexplicably managed to overcome Arsenal at Old Trafford and advance to the FA Cup semi-finals.

Here are the highlights from a frankly weird game.

More importantly, here's how an injury-plagued United lined up on that occasion, with the Da Silva brothers on either flank. 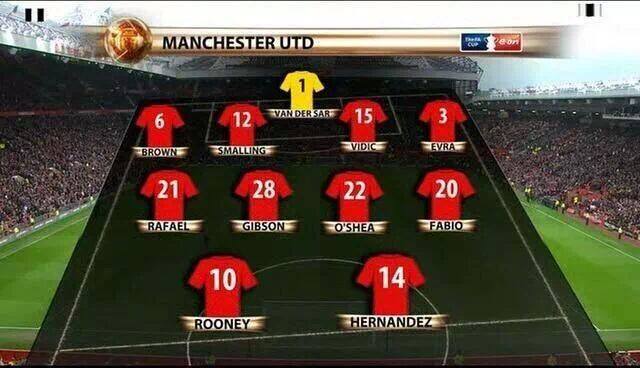 And what's more, Rafael and Fabio - the latter in particular - enjoyed one of their finest games in United colours, with older brother Fabio netting the opening goal in a hard-fought 2-0 victory.

Edwin van der Sar made a string of fine saves to protect United's lead before a then-balding Wayne Rooney finished one of the great Fergie smash-and-grabs.

Tangentially, in keeping with similarities between that fateful quarter-final Mourinho's similar injury crisis tonight, it's worth recalling the BBC's match report from that 2011 fixture, which perhaps speaks to Arsenal fans' recent frustrations...

Manchester United piled on the agony for Arsene Wenger as Arsenal's rapidly deteriorating season took another blow with defeat in the FA Cup quarter-final at Old Trafford.

Arsenal still have the Premier League title to aim for, but Wenger must sift through what may well be heavy psychological blows to his players as three targets have been removed from their sights in swift succession.

Wenger always hails the mental strength contained within Arsenal's squad - and that faith and resolve will now be tested to the full after a nightmare spell.

SEE ALSO: The Fergie Effect: 5 Matches Man Utd Had No Right To Win, But Did So Convincingly