Manchester City once again collapsed in the Champions League on Wednesday night, with a scarcely believable Real Madrid comeback putting paid to their hopes of winning the European Cup.

City have only reached one Champions League final since Pep Guardiola took over as manager in 2016, a huge underperformance compared to their domestic dominance.

They moved a step closer to continuing their domestic stranglehold on Sunday afternoon with a 5-0 win over Newcastle United. That win puts them on the cusp of a fourth league title in five years.

Despite that, Jamie Carragher asserted on Sky Sports that Guardiola will be deemed a failure at Manchester City if he does not win the Champions League with the club. Carragher and former City fullback Micah Richards had a fascinating debate about the matter after Sunday's match at the Etihad.

Manchester City: Carragher says Guardiola will be deemed a failure if he does not win CL

Pep Guardiola has undoubtedly made a massive impact on English football in his six seasons in charge of Manchester City. Three Premier Leagues (with a fourth just within their reach), four League Cups, and one FA Cup represent a period of dominance for City over their Premier League rivals.

Is it failure if Pep Guardiola doesn't win the Champions League at Manchester City? 🤔 pic.twitter.com/daRTOV84W5

But the Champions League is still missing from City's trophy cabinet, despite their huge expenditure since 2016. After Sunday's game against Newcastle, Jamie Carragher questioned whether Guardiola's time at the club could be seen as a success without a European title, something which Micah Richards seemed reluctant to admit.

Micah Richards: When Man City went out mid-week, everybody was saying that their season is a failure. We're talking about the Premier League - if Pep wins four out of five seasons, that's greatness, that's dominance. Yeah, it's not done yet, but they still have the chance to do that. Yeah, in Europe, it wasn't great, it was disappointing - especially the way it happened. But in the Premier League they have been outstanding.

Jamie Carragher: Is it a failure if Pep Guardiola doesn't win the Champions League with Man City?

Richards: Failure is a strong word. It'd be a massive disappointment because that was what he was brought in to do.

Carragher: That's a failure then, if it doesn't happen, isn't it?

Richards: It's the way it's happening. Going and playing against a Chelsea side [in last year's final] as favourites - he didn't play a defensive midfielder. Losing against Real Madrid while having a two-goal lead. It's very disappointing. I think when we talk about Klopp and his contract...I think Pep won't want to leave Manchester City until winning it and I truly believe that will happen.

One of the issues cited with Manchester City this season has been the absence of a top class central striker. The club are reportedly on the verge of signing Erling Haaland for next season, in an attempt to fill that void.

Before the outset of this season, City tried to sign Harry Kane from Spurs in a prolonged transfer saga. The club would ultimately sign winger Jack Grealish for £100 million from Aston Villa, leaving the striker problem unsolved. Grealish has underwhelmed during his first season at the Etihad.

Carragher also questioned whether the presence of someone like Harry Kane could have changed things for Manchester City in the Champions League this season.

Carragher: Do you think if they signed Harry Kane instead of Jack Grealish in the summer that they'd be in the Champions League final?

Richards: I think with Jack Grealish...the way it's gone this season...Kane would have been a better buy last season. I still believe in the quality of Jack Grealish.

Carragher: What I'm saying is - rather than spending the money on a player I don't think they needed, I don't question Jack Grealish, but Man City did not need that player. Pep Guardiola wanted a striker, that's why he went for Harry Kane. Look at that home game against Real Madrid, they battered them.

Richards: Man City did try to get Kane and it just didn't happen. But, to answer your question, yes, I think if Man City get Harry Kane, it makes them an even better team. 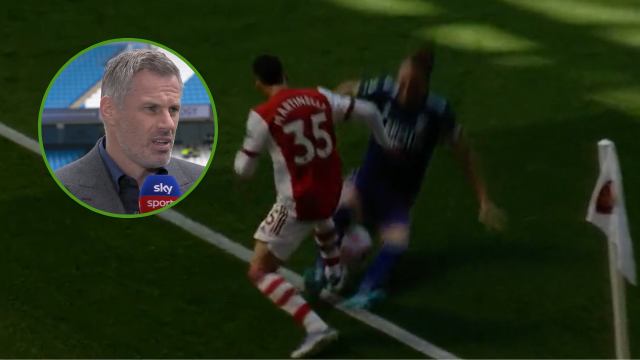