There may not be much in the way of incomings at Old Trafford this Deadline Day, but the Red Devils have put pen to paper on one of their biggest signings of the year.

Chequered performances, floating in-and-out of the first team and a rumoured fallout with then manager José Mourinho, having taken time off to welcome his first-born son into the world at the start of August saw the dark clouds accumulate over the head of head of the occasionally tetchy French striker.

And, it only took one look at him to tell you everything you needed to know.

Twenty-two, blessed with mercurial talent and looking a little love, the line to court the former Monaco man certainly wasn't a short one.

But skip ahead half a season and the outlook is very different to what was forecasted in the darkening days of late Autumn.

So different in fact that a smiling, selected and scoring Martial has committed to United, for the next five and half seasons, with the option of a year on top of that.

The tipping point? An amiable Norwegian, of course.

Martial was quick to highlight the role United's interim manager and his backroom staff have played in giving him back "belief" and bringing his game to the "next level".

In turn, Solskjaer paid tribute to the frontman.

Anthony is one of those naturally gifted players that any coach would love to work with. For a young man, he has a good footballing brain which, when coupled with his exceptional talent, makes for a player with an exciting future ahead of him. This is the perfect club for Anthony to progress his development as a top-class forward and we are all delighted he has signed a long-term deal.

One man who genuinely is leaving the North-West is Marouane Fellaini. The perennial misfit has been one of the biggest casualties of the counter-attacking Solskjaer era, having been one of the more effective personnel at the Theatre of Dreams whilst the more industrial Portuguese fella was at the helm. 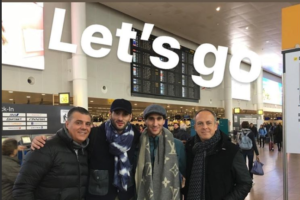 The Belgian is set to move to the Chinese Superleague side Shandong Luneng.

Any sensitive souls out there worried that the bushy headed midfielder has been hard done by, need not fret.

Not only is he moving to one of the most exclusive areas of the People's Republic, his income, as you would expect, reflects as much.

Only the £235k a week after tax, doubling his Old Trafford takings. Very nice.

Football
2 years ago
By Aaron Strain
Cavan Youngster Doyle-Hayes Joins Cambridge United On Loan
Football
2 years ago
By Aaron Strain
Aaron Connolly Signs On At Brighton For Another Three Seasons
random
3 years ago
By Eoin Lyons
The Best/Worst Player Announcement Videos From The January Window
Popular on Balls
Football
2 days ago
By Jonathan Byrne
Report: Festy Ebosele Attracting Interest From Bundesliga And Serie A
Football
9 hours ago
By PJ Browne
'If He Continues With Performances And Goals Like That, Stephen Kenny Will See It'
GAA
2 days ago
By PJ Browne
Army Gave Sue Ramsbottom No Time To Drown Sorrows After Laois All-Ireland Loss
Football
1 day ago
By Jonathan Byrne
Peter Crouch's Stories of Being David Ginola's Bootboy Are Comedy Gold