It's a sad day for football as we look back on the career and life of Diego Maradona.

No player in the history of football had a better collection of kits from their career than the Argentine legend. Be it with Boca Juniors, Barcelona, Napoli, or Argentina, they were all belters. In fact, we can go even further back.

Below is a picture of a teenage Maradona lining out for his first club, Argentinos Juniors. An eye-catching red Adidas number, it was certainly a decent kit.

On this day 1976: 15 year old Diego Maradona made his debut for Argentinos Juniors pic.twitter.com/Rr0LDOVVPg

Then you get into his stint at Boca Juniors. One of the most iconic jerseys in world football, the one from Maradona's time at the club was amongst their finest efforts.

Next, it was Barcelona.

He moved to the Catalan club for a then world record fee of around £5million, scoring 38 goals in 58 games during two injury hit seasons at the Camp Nou.

He did it while sporting a classic kit:

His time at Napoli was the defining period of his career, both on and off the pitch. He would hit his highest and lowest moments while a player in Naples, arriving at the club for another world record fee.

He wore a few different kits at the Italian club, with this one away one from his debut season perhaps the best of the lot.

They had a few different Buitoni-sponsored efforts, with the home jersey from the 87-88 season below.

This cracking effort from the 89/90 season, which saw Napoli claim a second Serie A title, is probably the most iconic one from his time in Italy.

And then you have the Argentina kits.

Both the home and away jerseys in the 1986 World Cups were exquisite.

The Adidas versions from Italia 90 were lovely to look at.

Argentina is back in the semifinals for first time since 1990, when Diego Maradona led the team to the finals. #ARG pic.twitter.com/V6HPYhcNTH

Maradona during the World Cup Final in 1990 against West Germany. © Yahoo! pic.twitter.com/sSm6KLrIie

His career was very much on a downward swing by the 1994 tournament, but the away jersey from that year may have been objectively the most eye-catching of the bunch.

Argentina 1994-95 away by Adidas as worn at USA 94 when Maradona's famous celebration prompted a drugs test.

Home and Away: Maradona Sevilla and Zamorano Real Madrid pic.twitter.com/PnemvRhCX7

He may have only played five league games for Newell's Old Boys, but we are all about his two panel jersey.

He finished his career in another iconic Boca Juniors effort.

#OnThisDay in 1997 Diego Maradona played his last match; replaced by Riquelme as Boca beat River in a Superclásico at El Monumental pic.twitter.com/CWJ9cC4Qj0

There you have it, definitive proof that Diego Maradona wore better kits during his career than any other player in the history of the sport. It's not even close.

Incredible kits for a remarkable player. 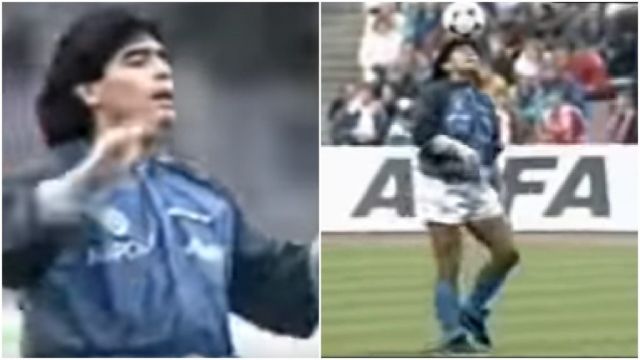