When David Forde stood on the sideline pulling on his gloves as he awaited to replace Shay Given in the Ireland goal at Turner's Cross, Martin O'Neill had us all fooled.

There were four goalkeepers in O'Neill's provisional squad - three of them received game time during the friendlies against the Netherlands and Belarus.

Darren Randolph - presumably the first choice keeper for the Euros - played 90 minutes against the Netherlands. Last night, against Belarus, Shay Given stood between the posts for the first 68 minutes before David Forde took his place. 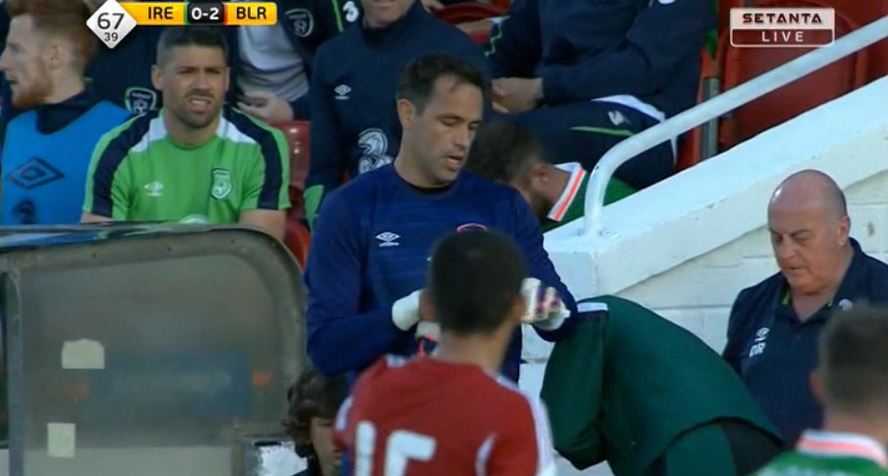 It seemed to confirm what pretty much everyone thought. Despite being the only Irish goalkeeper getting regular football, it looked like Keiren Westwood was going to be watching Euro 2016 from his couch.

There was a rumour doing rounds earlier that Westwood rather than Forde would be in squad. Would imagine Forde coming on means it's false.

The look on the Sheffield Wednesday keeper's face and his demeanour said it all. His was a wry smile. His head hung despondently.

Westwood thought it too - Forde was going to France and he was not.

On Setanta, twice after Forde replaced Given, we got 'Westwood Cam'.

Then, a little after 10:30pm, O'Neill surprised us all when he included Westwood in his 23-man squad.

The Republic of Ireland squad for #EURO2016 has been announced! #COYBIG pic.twitter.com/4WwmTRLOOF

Post-match, James McClean spoke about how the players were heading to the dressing room to hear whether or not they had made the squad. So, presumably - especially those on the fringes - were unaware of their circumstances.

The replacement of Given with Forde appears to have been a gesture to the Millwall player, perhaps one last appearance for Ireland. He is someone Irish fans have felt comfortable with between the posts whenever called upon. The Galwayman has never done any wrong.

After the squad announcement, despite the bad news - and presumably having thought that he was in the squad - David Forde was still happy to sign autographs for fans.

Fair play to David Forde who just stopped to sign a load of autographs minutes after being cut from the Euro squad. Tough night for him.

Read: David Forde's Conduct After The Sickening News Impressed Everyone

Football
5 months ago
By Balls Team
Here's The Last Irish Football International From Every County In The Country
Football
1 year ago
By Michael McCarthy
David Forde Announces Retirement With Emotional, Poetic Goodbye
Football
3 years ago
By Gavin Cooney
'I Was Emotionally Illiterate' - How David Forde Conquered His Demons
Previous Next