'We Don't Have The Players' Is A Load Of Horseshite

This may well be the worst Irish football talent base we've had in over 50 years.

For the first time, a generation of Ireland international teams must operate without a top class international class player. We don't have a Giles, a Liam Brady, a Paul McGrath, a Roy Keane, a Damien Duff, a Robbie Keane, to name but a few who overlapped in Irish teams going back to the late 1950s.

We bemoaned the poor displays of the Staunton and Trapattoni eras, but overlook that both managers had Keane, Duff, Given, Dunne and O'Shea to build around. Martin O'Neill, in fairness, doesn't have that.

Ireland currently have one very good player, a great leader, and a catalyst for everything good Ireland do on the pitch, but he's a right back and, increasingly, injured.

Last night, we saw a team devoid of not only tactics and urgency (until Wales' goal), but of true international talent.

Martin O'Neill spoke of technical deficiencies after the game. He is right.

"We lack a little bit of technical ability." https://t.co/8cyMMvGKio

But, either through denial or being blinded to reality, he's missing a far greater problem.

Ireland might just "not have the players" to cut it against top international teams. Gone are the days, at least for now, where the Irish "heart and spirit" (in reality, tactics) were enough for us to overcome the talent deficit against European superpowers. That's because, despite the reliance of "heart and spirit" (tactics), there was also a sufficient level of talent there to execute the gameplan.

O'Neill's argument falls down significantly though when talking we're not talking about France, Germany, Spain, or even Wales, really. The side that showed up in Dublin last night without Bale and Ramsey wasn't the real Wales team.

Wales came to Dublin with a team of just three Premier League players, Wayne Hennessey, Ben Davies and David Brooks. Of their eight Championship players, four have started 50% or less of their club's games this season.

Northern Ireland have significantly outperformed the Republic during the tenure of the two O'Neills. Denmark, with one truly outstanding player, are ranked tenth in the world. Iceland may be out of their depth in Group A of the Nations League, but they got there with a group of players no better than Ireland's.

Teams with players playing at much lower levels regularly outplay Ireland on the pitch both home and away.

What O'Neill won't consider in his mantra about technical abilities, one he inherited from his Italian predecessor, is that he isn't coaching a team to perform to their best or to overcome this faults.

When they conceded a goal, they suddenly became a different team. Darren Randolph went up for a corner at the death, and the Irish players gathered in their devastation at the final whistle. But what were they playing for? What good was a draw?

Respectability and a reason to pass off criticism? A well earned point? Why didn't Ireland play like that with the game at 0-0? 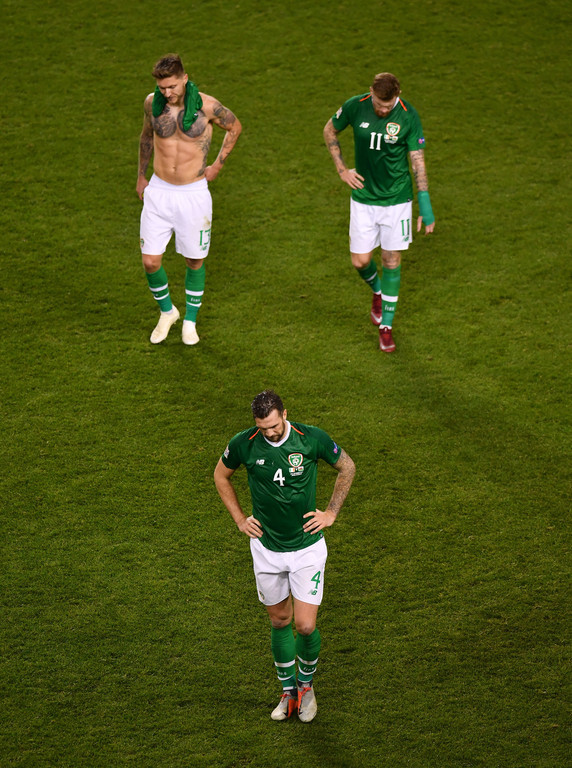 After the game, Keith Andrews, a voice of much needed passion on Sky Sports on a night when the country was crying out for the Three Amigos, bemoaned the manager's substitutions. Did they practice their plan B or plan C, playing with a narrow front three? The tone of his question gave us the answer. Of course they didn't.

In fact, you'd have to wonder what they did practice?

Cyrus Christie is not the first player to talk of O'Neill not telling him he was playing out of position until an hour before the game. O'Neill and Keane may think professional footballers should be able to go out and play, but it doesn't seem to be working lately.

"They don't have a clue what they're doing."https://t.co/YdUu2QNfxF

Jack Charlton's teams were often lampooned by purists, but you can't argue every member of the squad didn't know exactly what they were supposed to do. History remembers the sneaky nights out and The Harry Ramsden's Challenge but forgets that if a player stepped out of line with the gameplan by so much as passing to a striker's feet, they were lambasted and often ostracised. It might not have been pretty, but Ireland were coached and disciplined.

The team spirit that was born in that era, and evolved over the generations since, helped managers implement those tactics in the short period they had with the players. Playing differently than you do at club level becomes a welcome distraction - a nice break from the monotony of league football. For a few weeks a year, players get to try something different, something new, with a similar minded group of friends.

That team spirit and enjoyment in trying something new appears to be gone now. Maybe it's because they are not trying anything at all.

Team spirit doesn't just exist because we're Irish. It needs to cultivated and worked on. This is an approach seemingly shunned by this management team, in particular the assistant manager.

So, if Ireland don't have a gameplan, don't practice different formations, don't let players know in advance of a game that they'll be playing out of position, and don't have a lead-from-the-front unbreakable team spirit, what do they have?

Technically inefficient players. We don't have the players. A convenient excuse for a manager whose time has passed.

SEE ALSO: O'Neill's Era Is Done - We Must Now Decide Whether The Irish Team Is Worth Caring About