Isn't it just typical of Ireland to have perhaps our two best players playing in the same position? You can try fit both in the team, but that can be difficult. It is the conundrum currently facing Mick McCarthy.

The Ireland boss attempted to fit both Seamus Coleman and Matt Doherty into the same team for the Gibraltar game, but he was not happy with the results. Playing on the right of midfield, Doherty was withdrawn after 55 minutes and did not start the following game at home to Georgia.

With Friday's fixture against Denmark quickly approaching, McCarthy has confirmed he will not be trying out the Coleman-Doherty experiment once again.

Speaking at the Aviva Stadium this afternoon, Matt Doherty said he and Seamus Coleman get on very well off the pitch despite their positional rivalry. The pair have discussed that Gibraltar game, and are not really sure why things didn't work out.

I mean, I don’t know. Me and Seamus have spoken about it, what we thought at the time. We didn’t think we were that bad actually.

Not much came off in that game for anybody really, it was just one of those games. I think we believe that we can play in the same team, that we can work together, but that’s not our choice.

We will have to wait and see when the team gets announced who plays.

The pair linked up well at times, but it was not all that surprising when the Ireland boss changed things up at the start of the second half.

McCarthy told Doherty prior to the Georgia game that he would not be in the starting team, something the Wolves man had been expecting.

It was fine, he just said what he was going with. I didn't necessarily have a problem, I could half see it coming after the (Gibraltar) game.

It’s never a good thing when you are getting taken off after 55 minutes, you know that you are probably going to be in trouble for the next game. It was nothing new to me. 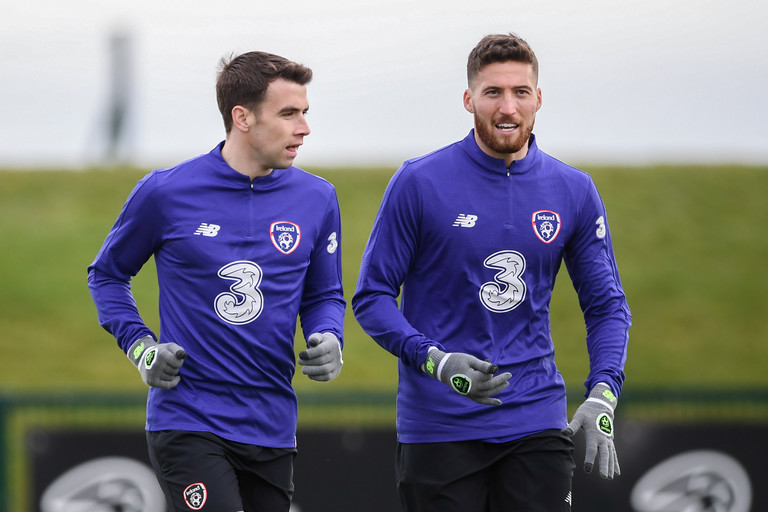 Doherty thinks it unlikely that he will be played out of position once again during the upcoming pair of matches, as he has been exclusively operating at right back in training.

If Coleman gets the nod against Denmark, the player is happy to bide his time until he is granted an opportunity by the manager. He also feels he is more than capable of slotting right into the team, despite the more defensive nature of Ireland's set-up in comparison to what he is used to at Wolves.

He (Mick McCarthy) knows that I can play in a number of different positions, but in training I’m playing right back. So, I guess I’ll just have to bide my time and see how it goes.

Like I said, whoever plays will do a great job. Right now it’s not me, so I’m going to have to just wait for my chance...

Yeah there is a lot more defensive responsibility. It will be different, but I have played right back my whole life really.

The kind of wing back role has only been in the last two years, so I still know how to play the conventional back four, I can play on the right side of that. So that wouldn’t be a problem for me...

"The team has not been named yet, so in my head I will still train and before the team is named, I will still prepare as if I am playing."

"If I’m not, I will still do the same, because I might have to come on after five or 10 minutes, who knows what can happen. So look, if I don’t play then I will support Seamus, and if I do play I will try and do my best."

Football
1 month ago
By Emmet Bradshaw
Irish PL Players May Be Set To Benefit From Man City UEFA Ban
Football
3 months ago
By Maurice Brosnan
'That Was Special' - Doherty Overjoyed After Sensational Goal Slays Man City
Football
4 months ago
By Aonghus Ó Maicín
Matt Doherty Scores Again And Celebrates With Touching Gesture
Popular on Balls
Football
10 hours ago
By Balls Team
Vote For Ireland's Greatest Football Jersey - Last 16 Round
Rugby
9 hours ago
By PJ Browne
Ireland 2010 U20 Six Nations Winners: Where Are They Now?
5