Mick McCarthy has named his Ireland team for the decisive Euro 2020 qualifier against Denmark this evening, and there is one surprise.

The Irish boss has made three changes from the game in Switzerland, our last competitive outing. In comes Matt Doherty, Conor Hourihane, and David McGoldrick, replacing Seamus Coleman, James Collins, and Aaron Connolly in the starting lineup.

Despite their strong performances against New Zealand last week, there is no place for Troy Parrott or Jack Byrne in the side. 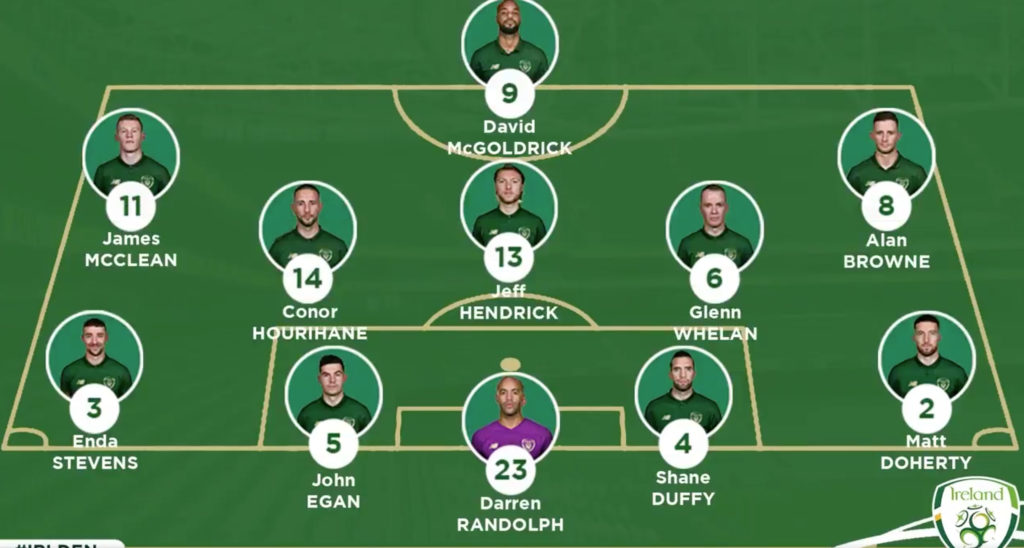 There is no place for Callum Robinson, with the decision to play Alan Browne on the right a bit of a shock. It had been assumed that only two of the Hendrick/Hourihane/Browne trio would start.

A win is the only result that will do for Ireland tonight, with three points enough to secure our place at the finals next summer. This tournament offers Irish players the unique chance to play a major tournament on home soil, with two of our group games taking place in Dublin should we qualify.

Results have been mixed in this campaign, with much of the good work done early on outdone by the results in Georgia and Switzerland last month.

Mick McCarthy insists that tonight's scenario is one he would have taken before the group began, meaning this is somewhat of a defining game of his second era in charge.

While the backup of a play-off spot is already in place, that scenario would require Ireland to win two one-off games, both of which would likely be away from home. Winning against Denmark tonight at home would seem the friendlier of those scenarios.

Hopefully it will be another of those special Dublin nights.