Despite Ralf Rangnick's appointment as interim boss, we seem no closer to knowing who will the Manchester United manager next season.

The German seems unlikely to be in the dugout beyond the end of the current campaign, with performances having been poor during his tenure up to this point. Mauricio Pochettino and Erik ten Hag are the two names most commonly linked, while Inter boss Simone Inzaghi has also been mentioned as a possibility.

Could there be another option in the Premier League?

Graham Potter has gone from strength to strength at Brighton, leading many to suggest that he is ready to move to a bigger club.

Speaking on Sky Sports, Paul Merson and Clinton Morrison said that Potter would be a perfect fit for Manchester United, even if he is unlikely to be considered.

🗣️ "If I was Man United I'd be watching Potter"

Paul Merson was full of praise for the Graham Potter and questioned why Manchester United haven't approached the Brighton manager 📝 pic.twitter.com/FRyqPwgRzt

Merson: I'm a big fan of his, I think he plays brilliant football. If I was Man United, I would be watching Potter.

The way [Brighton] play their football, and they haven't got the quality of the Man United players, they play great football. If I was Man United I would be monitoring him, I would be thinking 'why not go for him'.

They won't, because he's not a name. It's as simple as that. The Man United fans would be going 'what are we getting someone from Brighton for', that's how it works...

Morrison: The way they are playing football is brilliant at the moment. They're not clinical enough, but the style of football is outstanding.

I'm in agreement with Merse. For a club like Man United, why are you not knocking down the door trying to get Graham Potter? They have tried other types of managers, he's a perfect fit for them.

Brighton fans will be shouting at the TV screen saying 'we don't want him to leave this football club', but evidently in the future the big teams will come knocking.

Potter certainly has the talent to be successful at a major club, although whether Manchester United would consider him for the role at this point remains to be seen.

Either way, you'd imagine somebody will snap him up from Brighton before too long.

SEE ALSO: Neville & Carragher Have Had Enough Of PL Teams Getting Games Called Off 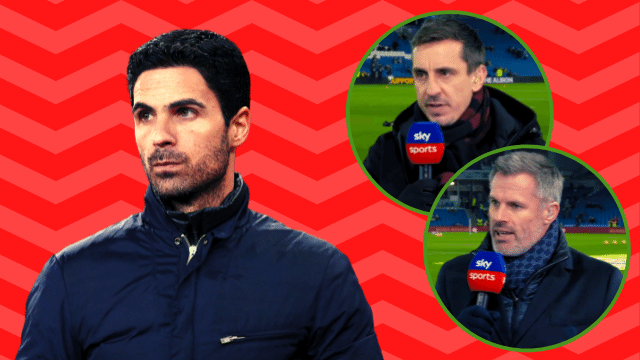