Michael Obafemi scored his first goal for Swansea on Saturday since moving to the Championship side from Southampton.

The 21-year-old hit an equaliser for Swansea in the 77th minute against Birmingham. However, five minutes later, Riley McGree scored a winner for Birmingham as they emerged victorious, 2-1.

Obafemi's goal came after a superb ball over the top of the defence from fellow Ireland international Ryan Manning.

"It feels amazing to score my first goal for the club, it was a long time coming," Obafemi told the Swansea club website.

"That was a nice feeling but it’s just disappointing that we couldn’t get the three points to round off a perfect week.

"It was all about just getting that first goal to get me started and I finally got that so I’m happy."

Obafemi entered the action on Saturday as a second half substitute. The striker has endured a frustrating period of injury troubles since join Swansea.

"It’s been difficult, I’ve had a lot of injuries in the past as well but I’ve come to every game, supported the boys and cheering like I’m on the pitch or like I’m one of the fans," he said.

"It hurts me that I can’t help the team but I will still support the team no matter what, whether I’m on the pitch or on the bench.

"The medical staff have been great, they haven’t rushed me at all. They just said for me to come back in my own time and when I feel ready, so I’m thankful for them and hopefully I’ll have an injury-free season."

See Also: Tayo Adaramola Showed On Friday Why He Is Ireland's Next Superstar 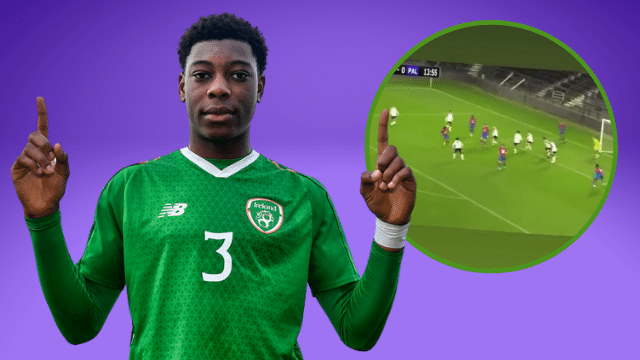 Football
2 years ago
By Balls Team
Ireland Hopeful Fires Memorable First FA Cup Goal Of The Decade
Football
4 years ago
By Eoin Lyons
Garry Monk Donates £80 To Get His Face Tattooed On Fan's Arse
Football
4 years ago
By PJ Browne
Tyrone Mings Nearly KO'd After Dramatic Goal Line Clearance
Popular on Balls
Golf
3 days ago
By Gary Connaughton
Padraig Harrington Glad He Didn't Have To 'Make A Decision' On Saudi Golf League
Rugby
1 day ago
By PJ Browne
The Last Munster Team To Win Silverware: Where Are They Now?
Football
3 days ago
By Gary Connaughton
Darron Gibson Was Often Mocked By United Teammates Over Bobby Charlton Advice
Football
1 day ago
By Gary Connaughton
Paul Merson Feels Liverpool's Season Can't Be A Success If They Don't Win The League