Few players have experienced a meteoric rise quite like Michael Owen. He broke into the Liverpool team as a 17-year old, quickly establishing himself as one of the deadliest strikers in world football. He would win two Premier League golden boots, go to two major international championships, and win the Ballon d'Or all by the age of 22.

While many young footballers would be overawed by that level of success and fame at that age, there were no such problems for Owen. He was relentless.

In his new autobiography Reboot, he describes how he managed to keep himself motivated despite his early successes. For Owen, he never lingered on what he had achieved, immediately looking forward to the next milestone.

He even admitted that during the presentation of his Ballon d'Or at Anfield prior to a game against Derby County, he couldn't wait for it to be over. All he wanted was to get on the pitch and score goals.

Speaking exclusively to Balls.ie, he said he does not regret failing to take tome to enjoy his achievements, and that it was this mentality that allowed him to reach the pinnacle of the game.

I just think the average players do that, not got that sense of urgency. I couldn't wait for the people to get off the pitch, just take the Ballon d'Or and get off. I had a 'quick, I've got to score here' type of attitude.

The people that do something remarkable and then spend three, four, five weeks celebrating, patting themselves on the back and saying 'look how good I was and what I did'. There's probably about ten trophies to be won in the meantime when they're back focusing on what they need to do.

It's all about the next thing. You've got to win something and then go and win the next one. 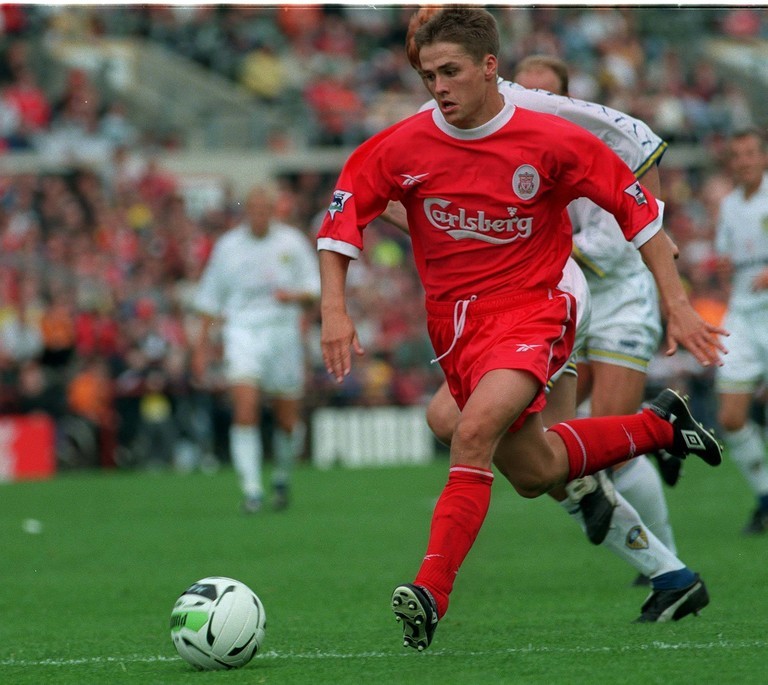 Despite this trait, Owen also knew when to display patience.

When he first broke into the Liverpool and England teams, there was a very clear hierarchy within the squads. The senior players were given priority and he never dared challenge that. Even when he was a couple of years into his career and scoring huge amounts of goals, he was still uncertain where he stood.

Of course, all of that has now changed. Young players walk into senior football as millionaires, and often with a sense of entitlement. The sense of patience shown by Owen and other players from his era no longer really exists.

It had even started to fade in the game while he himself was only in his mid-20's. Owen said that young players nowadays are far different to previous eras, and recalled something Wayne Rooney pulled off in his first England training session that he never would have dreamed of attempting:

It's not just football, it's life. People feel a bit more entitled now earlier than they ever did, people will turn up in a brand new car before they've even played their first game.

Personally I was brought up to earn your stripes and then you can do it. I would be embarrassed to drive in a brand new car having not kicked a ball in the first team.

There was a part in the book where David Beckham's wife was expecting me to stick up for him in a way (after sending off in 98 World Cup against Argentina).

I just felt that I was just a kid in the dressing room, I've not got a voice yet, give me another two or three years and I can have an opinion but at the minute I'm just an apprentice. Ok I was doing well and scoring goals, but still.

There was another part of the book where Wayne Rooney chipped the goalkeeper in his first training session with England. He was only 17 or 18 and I almost had to look away. We can all try that, but when you're 17 I thought you've got to earn your stripes a bit first.

It was seeing a young kid that was so confident, and cheeky in many ways, was amazing. I could do it on a Saturday against people, but in training I would be very respectful.

So I think it's the way you're brought up, but definitely the world is changing. Youngsters demand respect far earlier than they ever did I suppose, there's less of a hierarchy at football clubs.

You can listen to our full exclusive interview with Michael Owen here.

Premier League
4 days ago
By Gary Connaughton
Report: Liverpool Eyeing Dutchman To Bolster Defensive Options
Football
3 weeks ago
By Mark Farrelly
"The Moment Someone's Shining We Speak Immediately About Another Player"
Football
1 month ago
By Mark Farrelly
Everyone Was Delighted And Inspired Watching Seán Cox And His Family On The Late Late
Popular on Balls
Football
10 hours ago
By Balls Team
Celtic Players Left 'Shaken' By 'Violent Scenes' Outside Parkhead
2