Mick McCarthy has asked fans planning to protest on Tuesday during the Republic of Ireland's clash with Georgia to "do it somewhere else."

It has been an eventful few days for ex-FAI CEO John Delaney, who announced he was stepping into a new role last Saturday after Ireland's 1-o win over Gibraltar. It is an issue that is expected to be explained into when he faces an Oireachtas committee next month.

Fan forums and online rumours have suggested frustrated fans may throw tennis balls onto the field during the game at the Aviva Stadium. 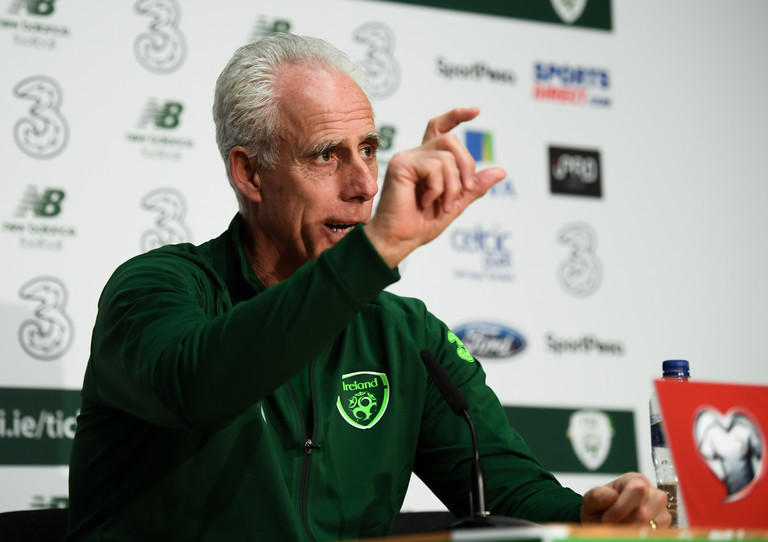 Speaking at his Monday press conference, McCarthy made clear he hopes the public just come to support the team.

I hope that's not the case, they are coming to watch a football match. They want us to win and give us a better chance and get behind us and not have outside influences affecting it. I can't affect anything about it. Maybe I'll take a tennis racket with me.

They are the best fans, they are fabulous. I just want them to come and support the team. If they have to demonstrate about anything, do it in another place at another time.

Can I just say something? Unless it's guaranteed that there is going to be one, I'm not going to talk about it anymore. We are talking about hypothetical. What am I going to say win, lose or draw, it's hypothetical. If it's brought up, I'm going to blank it.

Georgia arrive in Dublin off the back of a strong showing during their 2-o loss against Switzerland. Tuesday's game kicks off at 7.45.