Mick McCarthy is waiting for a call from Patrick Bamford regarding the possibility that the Leeds United striker could play for the Republic of Ireland.

Bamford played for Ireland at U18 level before switching to England.

Speaking on Wednesday at the launch of Club Ireland, the FAI's new three, five and ten-year premium level ticket packages, the Ireland manager said that he believes Bamford is interested in playing for his side.

"We have had a litany of messages with him to try and arrange to meet for a coffee and a chat with him and his Dad; then he was injured, a game got cancelled, I couldn’t go and see him," said McCarthy.

He played there the other night and scored on Saturday.

I’m waiting for him to say, ‘Come and meet me’, and I’ll drive to wherever it is and meet him and his Dad and we’ll get it sorted out.

[He's] Obviously interested enough [in playing for Ireland] to talk to me. I’ve got to put it into his lap and say, ‘If you are [interested], get a hold of me.'

McCarthy has also enquired about the possibility of Nathan Redmond switching his allegiance to Ireland. The 24-year-old Southampton winger has one cap for England, won in a friendly against Germany two years ago, but qualifies to play for Ireland through his mother.

"I’ve spoken to his agent, I’ve tried to meet up with him and it’s not been successful yet," said McCarthy.

"I think he has already played with England, hasn’t he?

"I think he’s been playing well, he’s been having a good season so maybe he is still harbouring hopes he is going to be picked for them ." 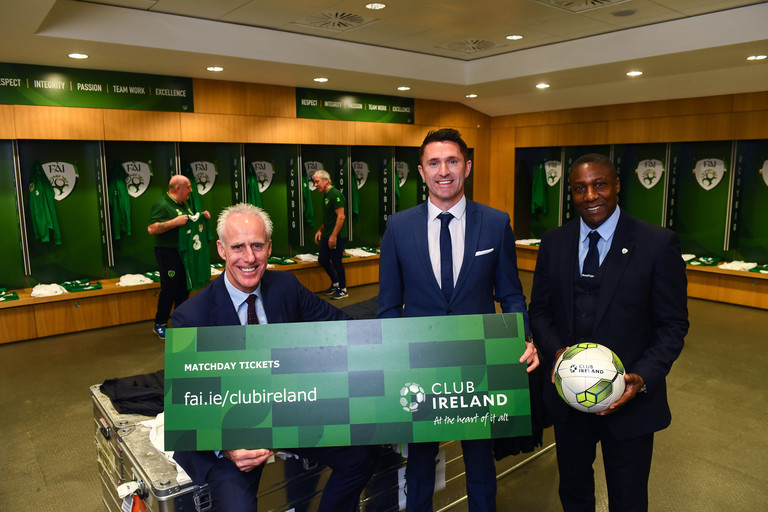 The process of Will Keane's transfer to Ireland has been less complicated. The striker, currently on loan at Ipswich from Hull, has scored three times for his temporary club since making the move to Portman Road in early January.

"That was a straightforward one," said McCarthy.

"I rang him up, [he said] ‘Yeah, I’d love to’, he’s started the process [of transferring] and he is in that process now, and he’s sadly out injured. He got injured on Saturday and out for six weeks.

"Look, he is only 26 and is still a young man but has been blighted by injury and is sadly injured again.

"I’ve seen him play twice for Ipswich, and he played very well."

The Football Association of Ireland (FAI) launched its new 3, 5 & 10-year Premium Level tickets - “Club Ireland” - ahead of the Republic of Ireland’s EURO 2020 qualifying campaign kicking off next month with Georgia coming to Aviva Stadium on Tuesday, March 26th.

Priced at €5,000 for a 10-year ticket and with 5 home international games guaranteed each year, the FAI believe they represent the most keenly priced Premium Level season ticket in Irish sport.

Membership of Club Ireland is on sale from today (Wednesday, February 27th) and can be purchased VIA: fai.ie/clubireland; by emailing Club Ireland [email protected] by calling 01 899 9547.

See Also: Mick McCarthy Opens Up On Details Of Call With Declan Rice