Watch: The Mitrovic Goal That Confirms Ireland Are Atop Our World Cup Qualifying Group

Have you recovered from Ireland's hard fought win over Austria yet? Well, we've got better news coming from Cardiff tonight.

James McClean's bullet strike put Ireland top of Group D on 10 points, at least temporarily. Now, thanks to Aleksandar Mitrovic, they remain there for the next four months minimum.

Gareth Bale (who else?!) had given Wales a lead midway through the first half and he had struck the post with five minutes left. From the very next attack though, Serbia would equalize.

Yes, that was utterly terrible goalkeeping but we don't particularly care about that.

The draw puts Ireland in the driving seat atop of the table ahead of their next game in March - which is against Chris Coleman's side in the Aviva.

The winners of Group D will automatically qualify for the World Cup. The best eight runners up heading into playoffs to get there.

Six points from their next two games will surely be enough for Martin O'Neill's side to get to at least a playoff.

For now, let's just all bask in this beautiful picture. 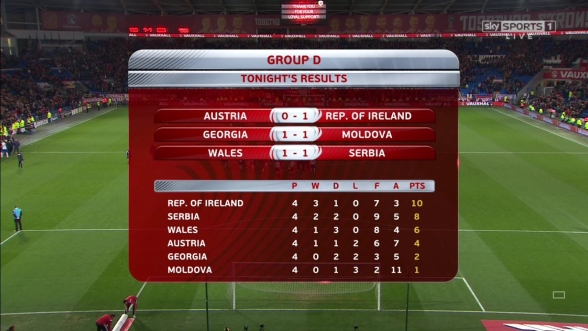 See Also: The Ireland Player Ratings From A Famous And Deserved Victory In Vienna