After a frustrating first-half at Vicarage Road this afternoon, Liverpool recorded a convincing 3-0 win that keeps them close to Manchester City at the top of the Premier League table. However, amid the positivity surrounding this result, Jurgen Klopp was questioned about a Mo Salah celebration that had certain viewers claiming the Egyptian was sending an unflattering message to Real Madrid's Sergio Ramos.

Speaking in the immediate aftermath of today's win, Klopp claimed to have no clue regarding the potential significance of the Mo Salah celebration.

Opening the scoring for Liverpool, Salah appeared to mimic Ramos' 'butterfly' celebration. This came only a day after the Spaniard came under scrutiny for reportedly having tested positive for an anti-inflammatory drug which is only banned if testers are not informed of its use.

According to the German coach, however, he has nothing to say on the matter. 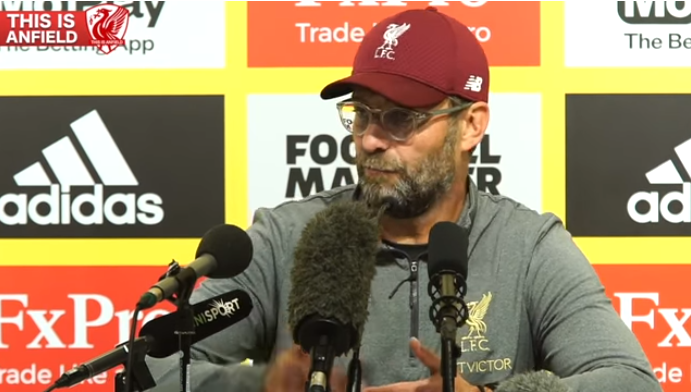 Memorably, Salah and Ramos clashed in the 2018 Champions League final between Liverpool and Real Madrid. A tie the English side lost 3-1, Salah was injured in a tangle with the Real Madrid captain.

With many hinting at a degree of malice on Ramos' behalf, the free-scoring Salah was forced out of the action prematurely, and, in his absence, Liverpool struggled to match the heights they had reached in previous rounds.

If indeed this Mo Salah celebration was targeted at Sergio Ramos, he is not the first Liverpool player to take some joy in what has been a difficult season for Ramos and Real on the pitch.

Parting with manager Julen Lopetegui sooner than many would have expected, Real Madrid are currently sitting 6th in the table after 13 games; today's 3-0 defeat to Eibar their fifth league defeat of a disappointing season.

Taking great pleasure in Croatia's recent defeat of Spain in the UEFA Nations League, Salah's Liverpool teammate Dejan Lovren made sure everyone knew that he had exacted his own measure of revenge on Ramos.

Whether or not the celebration was for Ramos' benefit, who can tell? Certain viewers were sure they knew the answer, however.