What Our Nations League Opponents Think Of The Republic Of Ireland

On Thursday the draw was set for the 2022/2023 Nations League. Thankfully, UEFA managed to handle it without complications.

The Republic of Ireland will feature in Group B1 alongside Scotland, Ukraine and Armenia. Given a lot of the reaction, it wasn't a bad draw.

Many fans will have hoped for some away day countries that were easier to travel to but nonetheless. From a competitive standpoint, we appear well matched.

Scotland and Ukraine did feature in the Euro 2020 tournament gone by this summer. They'll have some momentum heading into the next set of international fixtures.

The Reaction To The Draw

It's always interesting to get the perspective of different writers and players in other countries on how they view the Republic of Ireland and their trajectory.

After the culmination of the World Cup qualifying campaign gone by - it's safe to say a consensus of fans at home are pleased with the team's progress.

Do football enthusiasts abroad have the same view? Is being drawn with the Republic of Ireland a good thing or something to be wary of?

Here's how the nations reacted to the draw.

The BBC didn't offer much opinion, mostly sticking to facts and figures. They say the Republic of Ireland "suffered a disappointing World Cup campaign."

They described our personnel as "a squad of largely Premier League journeymen" with "faces familiar to the Scottish Premiership" naming Duffy, McGrath and Scales.

The Scotsman left a little more to be desired. Their article featured a header of Old, new and current foes for Scotland - why the Tartan Army will be happy with the Nations League draw.

While they mostly focused on their unavoidable pairings with Ukraine as of late, as the two will face-off in a World Cup qualifier in March, little was said about Stephen Kenny's men.

'We have a rivalry with the Republic of Ireland, so it’s a chance to stamp our authority'

They remarked that the two teams hadn't met since a Euro 2016 qualifier in June 2015. Shaun Maloney scoring the decisive goal in the first of two matches.

Comments came from Steve Clarke and Scott McTominay in the aftermath, with the Man United midfielder relishing the chance of the Ireland matchup.

"We have a rivalry with the Republic of Ireland, too, so it’s a chance to stamp our authority on that group," he told the media.

Overall - there wasn't much smash and grab stuff from Scottish writers yet. They should be the most in tune with what's going on across the pond.

Ukrainian website Sport.ua gave a synopsis of all of their potential opponents. Ireland have never played Ukraine in an international fixture funnily enough.

Many of the Ukrainian and Armenian outlets ran with Stephen Kenny's comments in a press conference where he said he expects to win the group.

"Kenny's ambitious goals must be given credit. However, at the same time, it should be noted that so far the Irish national team has not won a single victory in the League of Nations," they said.

"Prior to qualifiers that, they played twice in group B4, where they invariably took third place. Two draws and two defeats in the first Nations League, three draws and the same number of defeats in the second."

Ireland may never have played them before but it feels like there's going to be a spiritual connection there.

Football24.ua seemed happy enough with the draw in an article entitled Ukraine should not complain about rivals, a unique meeting, a group of death in the elite.

They did, however, seem to suggest that they had been drawn with two 'British teams' so they might need to work on their geographical knowledge.

"We note that Petrakov's team drew two British teams at once. This happened for the first time in the history of the national team of Ukraine."

"Against Scotland, we will also play in the playoffs for the 2022 World Cup. And for the first time, fate brought Ukrainians together with the Irish." Yikes.

It might not seem that surprising that there was a severe lack of in-depth analysis on the few Armenian football websites that do exist.

Most of the outlets ran with quotes from the players given to the FFA - the Football Federation of Armenia. One of those was from star player Henrikh Mkhitaryan.

"I think it's not the easiest group, but it can be even worse. We know the Republic of Ireland very well and have 'very good' memories about them," Mkhitaryan said.

Armenian National team🇦🇲 skipper @HenrikhMkh about yesterday's draw🎙
"I am sure we can fight against all the teams in our group🤺"#NationsLeague #Armenia #ArmeniaNT #Հայաստան #Mkhitaryan pic.twitter.com/f6RsbI7olt

"I think we are capable of fighting against these teams. If we manage to stay in the (Nations League) B league, it will be a success." Armenia will inevitably be the least favoured in the group.

FC Rostov midfielder Khoren Bayramyan gave the most generic answer of all time when asked about their Nations League opponents.

I am looking forward to playing against the teams that are drawn into our group. It will be a big challenge to face such teams. It will help us understand what are we capable of. There are a lot of strong players in all the teams, but we'll fight and do everything to achieve a good result.

Armenian manager Joaquin Caparros was a bit more off the fence. "Of course, Ukraine are the favourites, but the Republic of Ireland and Scotland are also good teams."

So overall - not exactly a slew of thought and opinion being dished out. There's still plenty of time though in the months ahead of the Nations League fixtures. 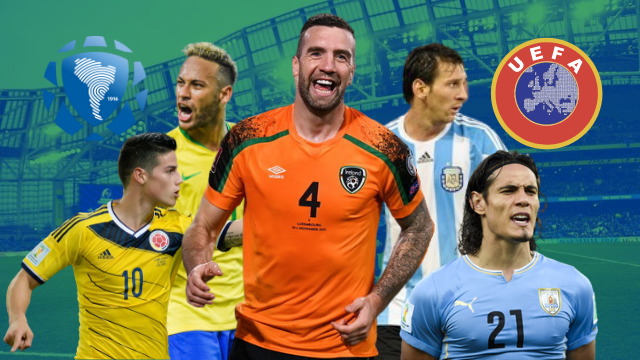