'There Was Never That, 'Oh, He's Got One Leg, Let's Give Him A Bit Of Sympathy''

In many ways, Neil Hoey is your average teenager. He's just finished his Leaving Cert. When CAO offers are made later this month, he hopes to get engineering at DCU. That's general entry engineering. He wants to put off any more big decisions for as long as possible.

"I'm only out of bed, I won't lie to you," he says answering the phone in the early afternoon; another average teenager box ticked.

At 18, Hoey is the youngest member of the Irish Amputee Football team.

Last year, the squad finished sixth at the European Championships in Istanbul. That performance secured a spot at October's World Cup. Only funding for the trip to Mexico now stands between the team and the tournament.

The FAI has provided financial assistance in the past but the Euros and the World Cup coming so close together has meant purse strings were tightened.

Hoey was 11 and at scout camp when he fell off someone’s back and broke his leg. That was August 2010. By the following March, his left leg had been amputated.

What seemed like a normal right of passage - a kid breaking his leg - turned into a life-changing event.

“Coming up to Christmas, it wasn't healing and they discovered it was cancer.

“Realistically, after I lost it, it was a different me. It made such a difference, I wasn't worried about hurting it.”

It was, literally, a lucky break for Hoey. He’d had a pain in his leg prior to the accident but there were no markings, no bruising. Would it have been found otherwise? He doesn’t know.

Amputation was the only option.

The way my cancer works, it affects the weight of your bone. The femur, which is the thickest bone in the body was about a third of what it should have been. As soon as you saw the x-rays, you sat there and thought, 'Oh, shit'.

There was no option of keeping it. If I wanted to keep it, it would have meant continuous operations. At 11, I was only going into my growth spurts. Every time I grew, I would have been going back for an operation and spent most of my teenage life on crutches with stitches.

Funnily enough, I ended up on crutches but it's more of an optional thing.

Though he was an 11-year-old who had just lost a leg, self-pity was never an option.

“There was never that, 'Oh, he's got one leg, let's give him a bit of sympathy'. It was better for me too because I'm lazy and me feeling sorry for myself would be a bad combination.

“The amount of times I got pushed out of the wheelchair while being raced around the schoolyard... It was never, 'Oh, he's got one leg now, what do we say to him?' It was great like that.

“Even my folks, straight away, started calling me, 'Hop Along Hoey'.”

The Irish Amputee Football Team need your help.
We have qualified for the World Cup in Mexico but need your help to get there. Give this video a watch, starring one of our goalkeepers @justy155 . Then please read the caption and donate. https://t.co/uNpihIAEvc

Neil was in fifth class at the time of his cancer. He stayed in touch through homeschooling from his teacher. That was not just in touch with the curriculum but also the gossip. Little things like that kept him in the loop.

A prosthetic leg was eventually fitted but it took longer than expected. Due to the chemotherapy, he was weak and had picked up an infection. The new limb was his by the summer but it took time to adapt.

It took a lot of falling. They weren't real quick, bang on the ground; you'd feel the leg go from under you and go, 'Ah, fuck' and then you'd drop.

You'd nearly be able to laugh at it in some ways - I wasn't laughing, I was extremely frustrated. Mam got a good laugh at it.

You'd see you were about to go and there was nothing you could do, just accept it, laugh and hope for the best.

Those falls eventually stopped and he returned to doing everyday activities like cycling to school and walking the dog.

Even before Neil lost his leg, he was being recruited for amputee football. A member of the team, Kevin Brady, lives close and had spoken to his parents.

“Neighbours talk and he knew that I was losing my leg and he said it'd be great to get him down and see what he thinks of it.

“I know some of the other lads, Christy literally drove past one of the goalkeepers at a bus stop, saw he had one arm, pulled back up, and went, 'You've got one arm, get in the car, let's go'.

"It's real quirky. It's not like, 'Oh, I read about it online'. “It's like, if you see someone about, you ask ‘Do you want to play football?'

"There's nothing weird about that!”

By September, six months after he’d lost his leg, Neil was playing football.

Right wing or striker is his position. Faster than others, the technical side of his game still requires development. Not a starter at the moment, establishing himself in the first seven for Ireland is his ambition.

"I'm good for running around and getting the ball here, there and everywhere. I might not be great at scoring the goals."

By his own admission, Neil had never been that big into the sport prior to joining the Irish team. His was a GAA household. He’d played hurling prior to the operation.

The only time football was heard of in the house was when his father put an international game on the TV. Since taking up the sport, his interest has stirred. He’d now sit down and watch a game.

Though, there are still gaps in his knowledge. Two years ago, the Irish Amputee team played an FAI XI. Robbie Keane and Damien Duff were among the opposition. 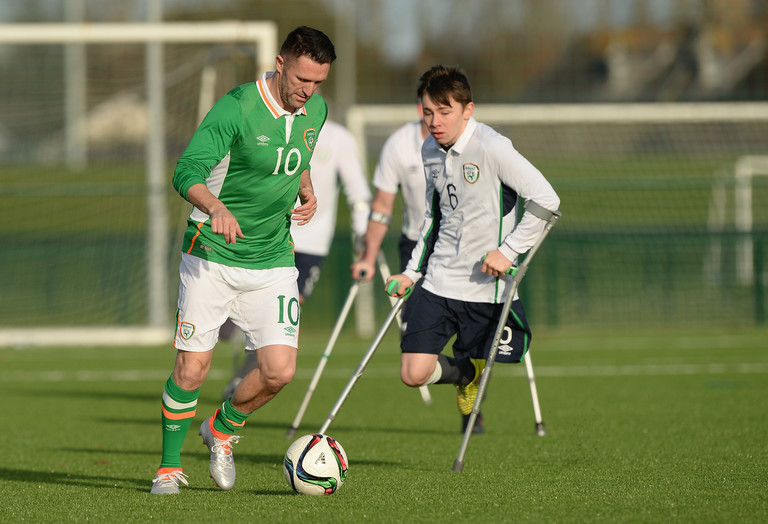 “I'm terrible with names of footballers. It wasn't until I was standing beside him that I knew who Robbie Keane was - that'll tell you what that was like.

“Originally, they played normal - they could run about but they had a few restrictions: they could only use their bad foot.

“Playing on crutches against Robbie Keane and Damien Duff, you're not going to stand too much of a chance. In saying that, we did well against them. It ended up being a draw and it went to penalties.

“We put them on the crutches and it was funny to watch, they went from being great footballers to, 'Holy shit, what's going on?' That was great.”

When Neil first join the group, ambitions were not as high as they are today. Attitudes were lax, the approach not as professional. Training was an hour or two at Ballymun Kickhams. Players travelled from all over the country for an hour or two on the pitch but that was it for another week, maybe even a month.

“It was like Sunday League football but with the name of the Irish Amputee team.

"Simon Baker wanted it and Christy [McElligott] wanted it. They wanted to go to the World Cup and would have been the driving force behind it.

"As soon as it was brought up within the group, everyone was on board. Nobody didn't want it. Changing the attitudes wasn't a big task, it was easy because most of the lads wanted to show that we're not just disabled and on crutches. They wanted to show people what it's about; what amputee football is and how it works.

“We had different physios coming in, sports psychologists, nutritionists and they were telling us what we should and shouldn't eat.

“It got a lot more professional after I joined. It was a feeling by that point that it became proper international football. It has remained that way."

Ireland were eliminated in the group stages of that 2014 World Cup, also held in Mexico. It was stepping stone for amputee football in the country. 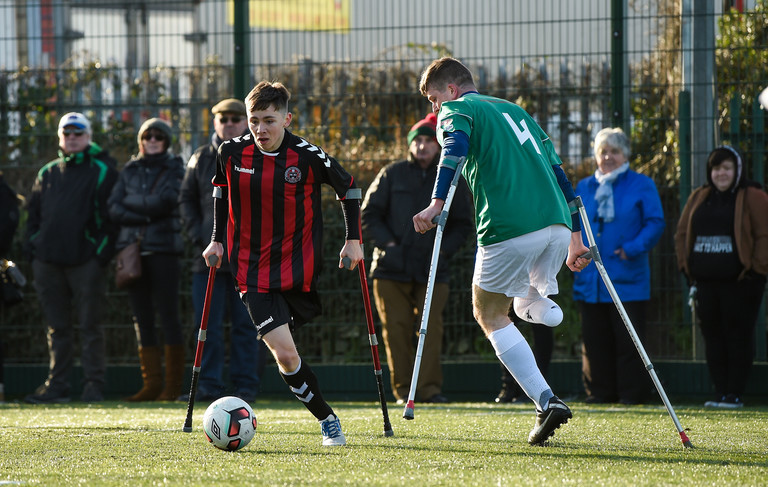 Earlier this year, there was another: the National League is amid its inaugural season.

Bohemians, Shamrock Rovers and Cork City were the founding members. There’s already talk of a team from Limerick and another from the North joining next season.

Neil plays for Bohs, currently sitting top of the table with two games to play.

He’s in no doubt that the foundation of the league has helped raise standards. They now have weekly training sessions and monthly games.

The club game in Ireland differs from international football: it’s five-a-side rather than seven-a-side; matches are also shorter. Still, it’s all game-time and good preparation for the World Cup.

International training is held every two to three weeks at the moment. That will ratchet up come the end of the league in late August as the World Cup nears. Mostly they train at FAI headquarters in Abbottstown but they've also had sessions at the University of Limerick and in Carlow. For a team drawn from all over the country, spreading it around makes it easier on those not from the Dublin area.

Having qualified for the World Cup, it would be a massive shame to not participate due to financial constraints. Neil is in no doubt that the required figure will be met.

"Everyone on the team wants to go and we do want to do well. We're all getting out there and going public with stuff, trying to share their stories and promote the football.

"It would be great to get there, it'd mean the world."

You can make a donation to the Irish Amputee Football Team via Go Fund Me and you can find more information about amputee football in Ireland on the IAFA website.

Football
5 days ago
By John Dodge
Every Irish Footballer To Play In The FA Youth Cup Final Since 1995
Football
1 month ago
By PJ Browne
Katie McCabe Bringing Arsenal Standards To Ireland Squad
Football
1 month ago
By Gary Connaughton
Jack Charlton's Pope Quip After World Cup Exit Has Become The Stuff Of Legends
Popular on Balls
Rugby
1 day ago
By Colman Stanley
'I Think Munster Softened Them Up For Us': Sexton Not Carried Away After Clincial Leinster Win
GAA
2 days ago
By PJ Browne
Mayo's Padraig O'Hora Using Football To Promote His Real Passion
Rugby
16 hours ago
By Colman Stanley
'That Pace, That Intensity, That Organisation' All Black Legend Has High Praise For Leinster
The Rewind
1 day ago
By Eoin Harrington
Watch: Brilliant Dermot Morgan Dublin Segment From 'The Travel Show' Resurfaces