5 Titles, 3 Cups, And A Treble, But Will Neil Lennon Be Considered A Failure As Celtic Manager?

For months now, it was inevitable, Neil Lennon was done at Celtic. It was only a matter of time. The time, as it turned out, was now. Lennon resignation as Celtic manager was announced this morning, just days after Celtic's 1-0 loss to lowly Ross County left Rangers' march to the Scottish Premiership all but certain.

The result leaves Celtic 18 points adrift of their Old Firm rivals with just eight games to go in the season. The dream of the 10-in-a-row, never done by a Scottish team, is over, and it was time for Lennon to go.

Put mildly, Celtic have been a shambles this season. Losses to Ross County, St. Mirren, and in both Old Firm derbies are added to disappointing draws against the likes of Livingston (twice), Kilmarnock, and St. Johnstone.

In Europe, Celtic were knocked out of the Champions League in the second qualifying round to Ferencvaros, and made no impact in the subsequent Europa League, gaining just four points, while losing both matches to Sparta Prague 4-1.

Throw in their controversial mid-season training trip to Dubai, and the breaking of Covid protocols earlier in the season, and it's just all been one big mess. The fate of poor Shane Duffy since he made his dream move to Glasgow has encapsulated the whole sorry season.

A run of five wins in February seemed to delay the inevitable, but with Sunday's result, the writing was on the well. In a statement, the club praised the work that Lennon has done, and paid a fitting tribute to the man who was associated with Celtic as a player and manager for 15 years in three different spells.

Neil has always been and will always be a true Celtic man and someone I will always hold in the highest regard.

I have watched Neil fight many battles over many years, on and off the field, with a courage and tenacity few could match. Even this season, he has fought so hard and worked tirelessly to turn things around.

While this season has not progressed as we would have liked, it cannot diminish the character or integrity of a man who has given the Club so much.

On behalf of everyone at the club, and personally, I would like to thank Neil for his work as our manager and I wish him and his family good health and continued success in everything they do.

Lennon himself also reflected on the sadness of the day, and explained that the job couldn't be done this season.

We have experienced a difficult season due to so many factors and, of course, it is very frustrating and disappointing that we have not been able to hit the same heights as we did previously.

I have worked as hard as ever to try and turn things around, but unfortunately we have not managed to get the kind of run going that we have needed.

While Lennon's status as a Celtic great is rightly undiminished, it is worth asking if his legacy as a Celtic manager is as secure?

On paper, his level of success is extraordinary. In two spells, he won five league titles, three Scottish Cups, and last season's League Cup. The Scottish Cup win over Hearts, played just last December, completed Celtic's historic quadruple double. Even for a club as used to success as Celtic, this is an incredible haul from someone who was only in charge for the trophy winning part of seven seasons.

Ultimately though, Lennon's success has to be measured against the place of Rangers in Scottish football. His first title, in 2012, came on the back of Rangers going into administration, and later into freefall. By 2013, they were no longer in the league. While Lennon admirably won the next two league titles, the failed to win five of the next six domestic cup competitions before departing in 2014.

In Europe, Lennon's first Champions League campaign was his most memorable, beating Barcelona, and losing in the Last 16 of the competition to Juventus. The following season was a miserable one though,with Celtic finishing bottom of their group with just three points.

When Lennon returned in February 2019, the club were already well on the way to an eighth Scottish title in a row. When Brendan Rodgers upped sticks, Celtic were eight points clear at the top of the table. However, Lennon did an admirable job in steadying the ship in a possibly tricky situation, and added the league title and the Scottish Cup to the already won League Cup.

With the job on a permanent basis the following season, Celtic showed a few wobbles and Rangers were evidently finally becoming a contender under Steven Gerrard. Even so, Celtic were clearly the best team in the league and were 13 points clear when the season was suspended for Covid-19. They were later awarded the title.

While Celtic easily had the best team in the league, it was still a fine achievement for Lennon, especially in securing another treble, and putting Celtic in touching distance of the elusive 10-in-a-row. Perhaps because the season was cut short, and it wasn't done in the style of a late season victory lap, he wasn't given sufficient credit for that title.

All in all, he may not have been given sufficient credit for any of his five titles. And the way they have collapsed this season, for a variety of reasons as Lennon himself claimed, is simply not good enough. A much improved Rangers team would always challenge this season, but Celtic didn't even put up a fight.

10-in-a-row matters in Scotland. The Lisbon Lions won nine successive titles up until 1974. In '75, Rangers ended that dynasty. When Celtic won the title in their centenary year of 1988, nobody anticipated it would nearly a decade before they would win again. The great Rangers team of the 1990s racked up another nine title. They were also scuppered on the tenth attempt though by Wim Jansen's Celtic team. Now, Celtic have fallen at that tenth fence again. They may never have a better chance.

In Scotland, success and failure cannot be measured the same as elsewhere. Lennon's five titles with Celtic are undermined by the limp defence in the face of a finally relevant cross city rival. If Celtic had gone down fighting this season, perhaps that would be different. It wasn't to be. And it was quite clearly over for Lennon a long time ago.

SEE ALSO: Don't Look Now, But Aiden McGeady Is Tearing It Up At Sunderland 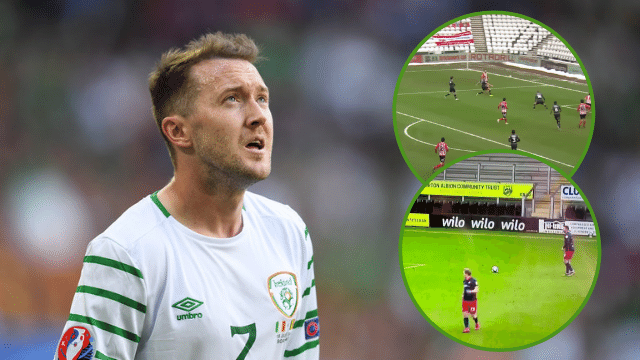