Neil Lennon has strongly condemned what he considers to be "totally unbalanced, unfair and hysterical" criticism of Shane Duffy for his performances in recent matches.

It's been a tough ten days for Celtic, losing the Old Firm Derby, followed up by a loss to AC Milan in the Europa League and a 3-3 draw with Aberdeen in the league at the weekend. A mistake from Duffy led to Aberdeen's second goal, and since then he has come in for criticism over his performances.

At a press conference on Tuesday, when asked about Duffy's form, Lennon said:

"He just needs to find his feet really. It's been quite a tumultuous start for him. I thought before the international break, we won eight games in a row and kept four clean sheets, I thought he was settling in quite well.

"He's just had a bumpy week, nothing more, nothing less. It happens. I'm not happy about the treatment he's getting from certain quarters of the media. It's totally unbalanced, unfair and hysterical."

Lennon staunchly defended Duffy: "He's a quality player. He made a mistake at the weekend but apart from that, I thought in the first half he was excellent. But this constant banging of the drum with individual players, for me, it's unacceptable and it's driven by centre quarters of the media. He's a human being, he made a mistake, he shouldn't be hung out to dry for it, and he has my full support."

Lennon's future has also been called into question, given Celtic's poor start to the season. It's something he feels has been completely overblown: "There's a clear lack of respect for the players here, for the management here, and for the backroom staff at the minute, because of one bad week."

He later added: "We've lost one game in the league and pundits are talking about me being two games away from the sack. Where that comes from, I've no idea ... Players getting singled out, abused, criticised, it's absolutely shocking."

"I have seen two newspapers run polls on whether I should get sacked or not. I have never seen it before in 20 years I have been here ... A minority of our support needs to calm down. They need to let the players settle ... In the main, I think the majority of the supporters are totally behind the team and totally behind the club."

Celtic are away to Lille this Thursday in the Europa League, before playing Aberdeen again on Sunday — this time in the semi-finals of the 2019-2020 (yes, 2020) Scottish Cup. 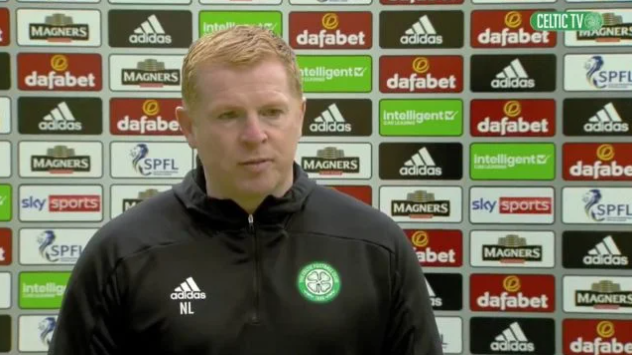