England had a sobering experience against Scotland last night.

Having been crowned favourites by many people in the British press prior to Euro 2020, it's fair to say their performances thus far are well short of what will be required to compete in this tournament.

They were outplayed by Scotland in the vast majority of areas at Wembley, with Steve Clarke's side certainly creating the better of the chances.  In the end, England were probably lucky to escape with a draw.

The middle third of the pitch was certainly one area in which they struggled to match the Scots. Much of that was down to the presence of 20-year old Billy Gilmour, who put in a stunning performance on his competitive debut for the country.

Speaking on ITV this afternoon, Graeme Souness said that England could 'desperately' do with a possession focussed midfielder such as Gilmour in their team.

He very rarely gives the ball away, he keeps the ball in tight areas. He just keeps it ticking over, he's a fabulous little footballer.

When you factor in that last season he only made five starts in the Premier League for Chelsea, he hasn't played a lot of football and came into a hothouse of a game. I thought he would only last an hour, but he managed to stay there.

He's got that all-around awareness of where people are all of the time. His first touch is generally away from the man who is marking him and he just creates space for himself.

As a debut for a 20-year old, he was the best player on the pitch last night.

That sentiment was echoed by Gary Neville.

He felt that Gilmour was much better in possession than the English midfield of Kalvin Phillips and Declan Rice, while the Scottish defence also made more of an impact in this area in comparison to their opponents.

It's a sobering experience that for England because Gilmore, McGinn, and McGregor were better on the ball than the England midfielders.

Not just that, but Tierney, McTominay, and Hanley at the back were better at getting the ball and passing it into the feet in midfield.

Mings, Stone, Kalvin Phillips, and Rice really struggled to get that buildup play right last night. Gilmour, to be fair, was always available. England don't have that player.

I know we've pointed towards Kalvin Phillips, but he's not as good on the ball or comfortable accepting the ball as Gilmour is. He's technically a little bit better.

If England struggled to get a foot on the ball thanks to a 20-year old making his competitive international debut, we can only imagine what some of the other teams in this tournament could have in store for them. 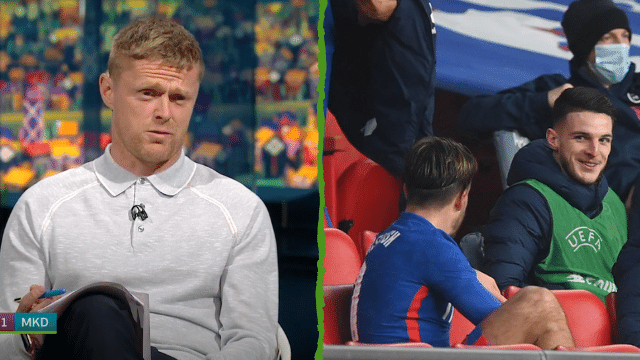