Report: Neymar And M'Bappé Bromance Leaving Cavani Out In Cold

The ambient sniggers of the last year don't appear to have affected Neymar too badly. The sheer comedy of Neymar leaving Leo Messi's shadow only to find himself stepping into Kylian M'bappé's shade in Paris will never perish, but the Brazilian has made the best of it by fostering a deep bromance with the French starlet.

It is notable how often M'bappé makes an appearance on Neymar's Instagram, and Neymar showered his friend in praise after M'bappé's four-goal salvo against Lyon on Sunday.

"For me, he's a phenomenon. I hope it will continue like that for several years because football will thank him".

Their bromance has blossomed on the pitch too, although this is reportedly having an adverse effect on the third of PSG's expensive attackers, Edison Cavani.

Reflecting on PSG's dominant display, French sports daily L'Equipe have today accentuated how Cavani has found himself somewhat ostracised on the pitch. 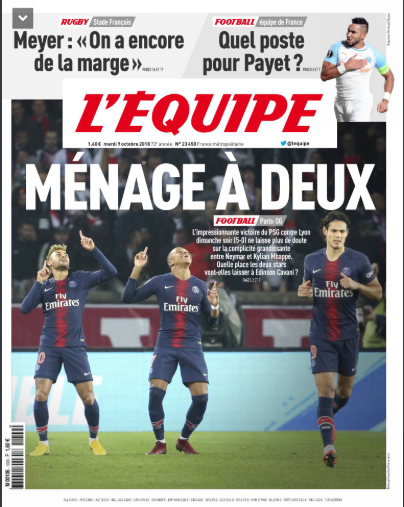 Inside, the paper have broken down the passing stats between the three players in the five games all three have played together this season.

Neymar and M'bappé are a very frequent passing combination: a quarter of all of Neymar's passes go to M'bappé; 31% of the latter's goes to Neymar.

It shows that Thomas Tuchel has some work to do in order to have PSG's front three click as a unit, which will be vital in the latter stages of the Champions League.

Even when Neymar is making friends, he is alienating someone else.

See Also: Opinion: Should We Actually Feel Sorry For Neymar?