PSG forward Neymar has been rated as the most valuable footballer in the world by an independent study by KPMG.

The 26-year-old Brazilian has an estimated worth €229.1 million. PSG team mate Kylian Mbappe is next on the list, valued at €215 million. Barcelona's Lionel Messi is third with a valuation of €203.3 million.

Mohamed Salah is the highest Premier League player on the list in fourth (€168.3 million), with Tottenham striker Harry Kane €17 million cheaper in fifth.

The rest of the top ten is made up of Chelsea's Eden Hazard, Man City midfielder Kevin De Bruyne, Antoine Griezmann, Paul Pogba and Philipe Coutinho. 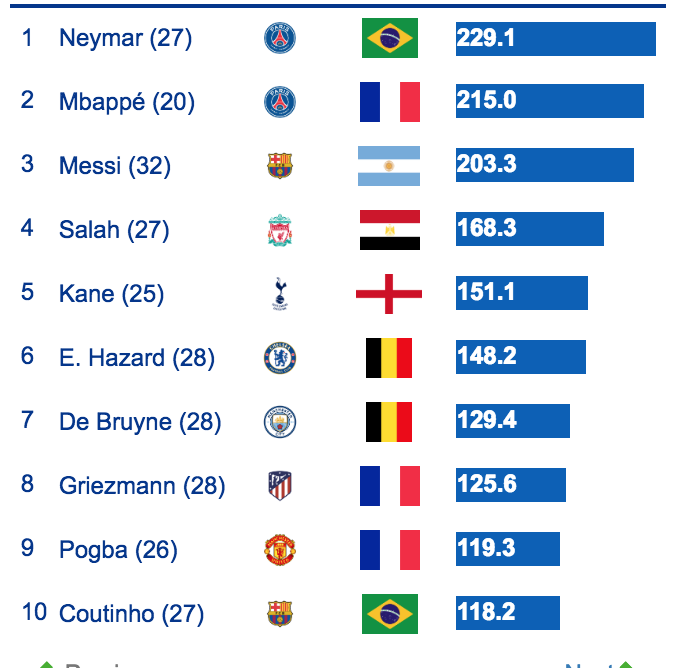 KPMG used many metrics to calculate the value of each player including;

Football
2 months ago
By Fiachra Gallagher
Watch: 17-Year-Old "Next Neymar" Scores One Of The Best Goals You'll Ever See
Football
9 months ago
By Balls Team
Chaos In Final Moments Of PSG Vs Marseille As Neymar Makes Racism Accusation
Football
10 months ago
By Gary Connaughton
Brian Kerr Questions Neymar's Winning Mentality After Final Loss
Previous Next