'If This Video Was Wrong, It Means They Can't Sing The National Anthem'

Niall Quinn thinks the commotion surrounding Stephen Kenny's use of what was called an 'anti-English' video by the English media was "much ado about nothing".

The video, shown to players before the 3-0 defeat at Wembley earlier this month, featured moments from Irish history mixed with Ireland goals against England down the years. Following an investigation, the FAI said on Sunday night that it would not be taking any action.

Quinn suggested that if a motivational video like the one Kenny used was deemed unacceptable, then Amhrán na bhFiann could be next on the chopping board.

"There was an inquiry into it, was there even a need for it? I'm not so certain," Quinn told Virgin Media Sport.

"It seemed to be something that was really promoted in the UK press, pushed by commentators from the political world, that it was the wrong thing to do.

"Can I just remind people that this is the same sort of setting, that when they go out on to the pitch they sing the Soldier's Song.

"It's about getting your Irishness out there in front of you to be motivated and to play for your country.

Quinn said that Kenny should not back down and say he was wrong to use the video, as "it takes him back a yard or two".

"When you're trying to motivate a team, you've got to try different things," said Quinn.

"The unfortunate thing was that somehow it leaked out. I don't think it was leaked out in the way it was first claimed, 'Oh, there was big unrest. Everybody was a bit unhappy'. As it turned out, the FAI looked into it and nobody passed any remark.

"My feeling now is that Stephen Kenny should ride on that and say, 'Right, OK, I'm building a team and I'm bringing motivation into my team, I'm doing it my way, the English press had a go at me but I'm going to do it the way Stephen Kenny does things.

"The day they take our history away from us, and tell us that we can't even stand for our national anthem anymore, because there's reference in there to the past...

"I'm so lucky I played and I was never asked what happened in our dressing room when we played England, because that makes this look very small indeed."

"Can I just remind people that this is the same setting that when they go out on the pitch, they sing 'The Soldier's Song'.

"I'm so lucky I was never asked what happened in our dressing room when we played England." 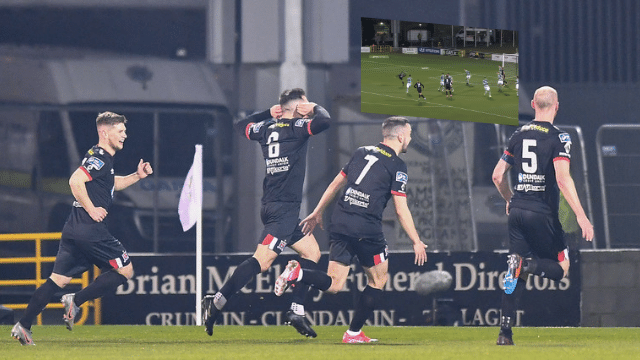