The BBC's subtitles produced a rather bizarre caption during their live coverage of the England v Scotland game last weekend. While commentator Andrew Cotter announced 'Nigel Owens is saying...' the subtitle produced a very different description. 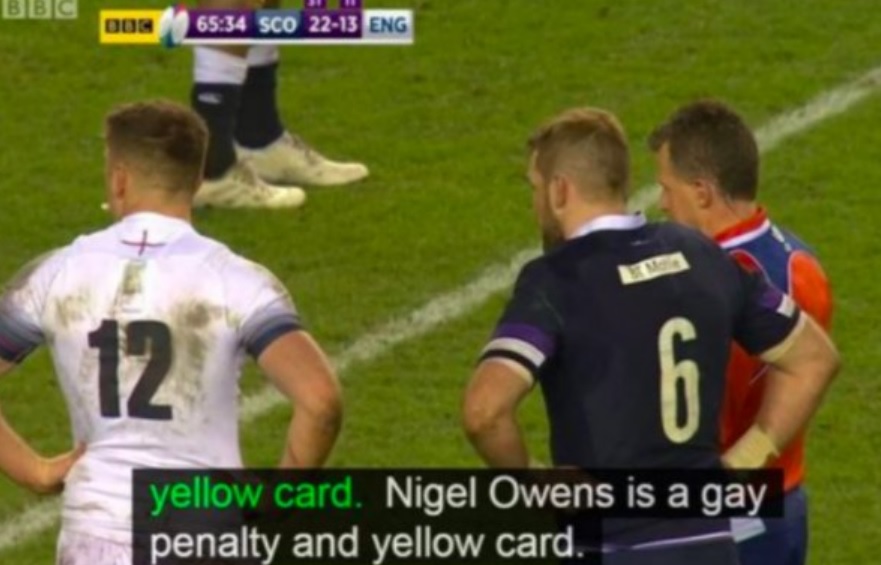 BBC Sport quickly corrected the error and released a statement explaining the malfunction.

Our live subtitling service produces accuracy levels in excess of 98%. But, as with all broadcasters, there are instances - particularly during live broadcasts - when mistakes happen. On this occasion the voice recognition subtitling software made an error which was spotted and corrected immediately.

In the past Owens has discussed his sexuality with admirable honesty, and the Welsh referee was made aware of the error after the game. However, he chose to see the lighter side of the situation and tweeted a comical understanding.

I must say I had a giggle when I saw this. I thought bloody hell this voice recognition is good. Shame it wasn't about 25yrs ago it would habe helped me find out who I truly was sooner then. Mistakes happen so no worries at all on my behalf BBC it actually made me smile. https://t.co/WdawxHNGY5

Owens is renowned as one of the best referees in the world while also speaking openly on a variety of matters both in and outside of sport.

Football
1 week ago
By Eoin Harrington
How To Get ITV In Ireland For The FA Cup Final
Irish Life
1 year ago
By Gary Connaughton
13 Sporting Events In Ireland's Top 50 Most Viewed Programmes Of 2020
Olympics
2 years ago
By Sean Meehan
Provinces Are Split On What Sporting Event They'll Miss Most This Year
Popular on Balls
Rugby
2 days ago
By Colman Stanley
'That Pace, That Intensity, That Organisation' All Black Legend Has High Praise For Leinster
GAA
2 days ago
By PJ Browne
Cusack Has Little Sympathy For Gearoid Hegarty After Red Card
Football
9 hours ago
By Colman Stanley
Wagatha Christie Trial Sheds New Light On England's Euro 2016 Disaster
GAA
15 hours ago
By PJ Browne
GAA President Explains Why Tailteann Cup Won't Be All-Ireland Curtain Raiser